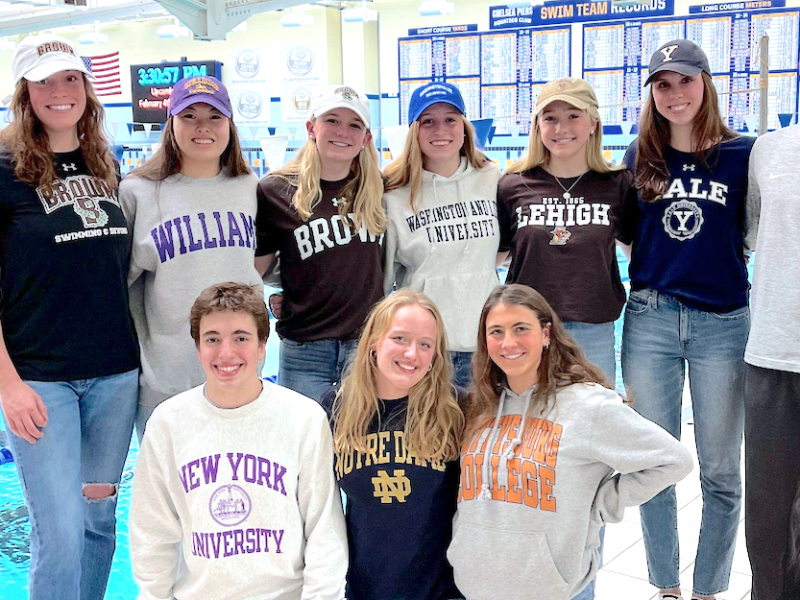 Six student athletes from Darien are among the 20 swimmers in the Chelsea Piers aquatics program in Stamford who will be swimming competitively in college this fall, the sports and fitness club announced. — an announcement from Chelsea Piers in Stamford

The swim team began in September 2012 and has grown since then. CP-AC was recognized by USA Swimming as a “Gold Medal” club in 2020 and 2021. The student-athletes who will pursue a career in NCAA athletics next fall include:

“To have such a large percentage of our senior swimmers be recruited to compete at these world-renowned institutions is a testament to their hard work and dedication,” said Kevin Burton, athletic director of Chelsea Piers Connecticut. “They are true student-athletes and the embodiment of the greater Chelsea Piers athletics community.”

The rest of the 20 swimmers are from Greenwich (eight), New Canaan (two), Rye, New York (two), and one each from South Salem, New York and Westport. 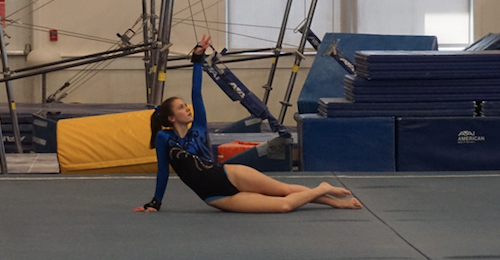 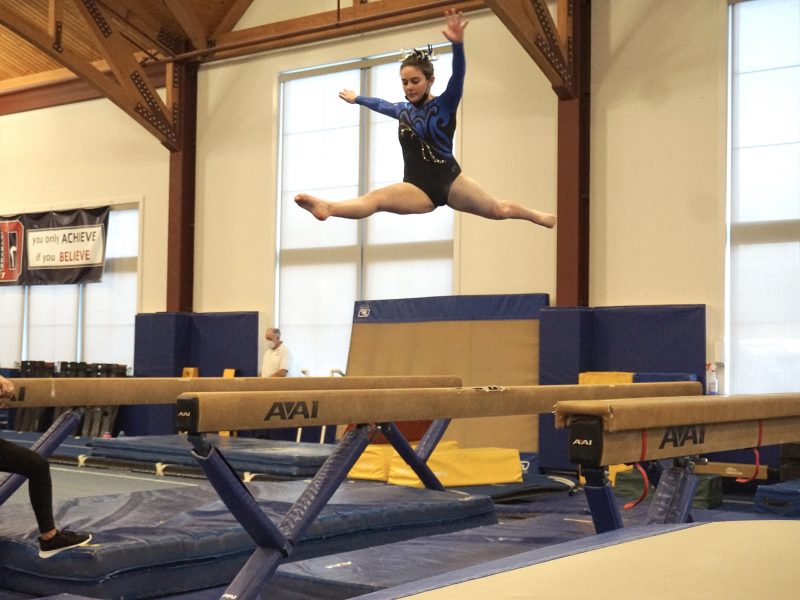 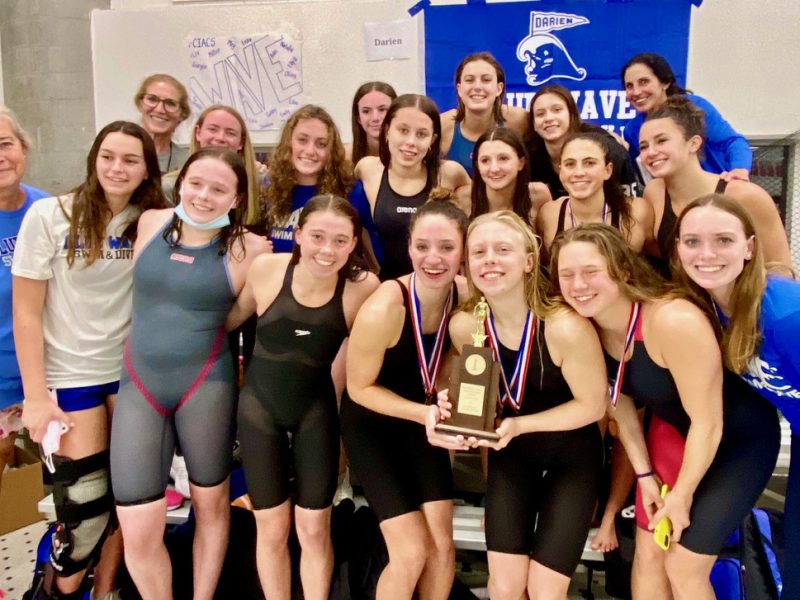 Several roads on both sides of Rings End Bridge will be closed temporarily Sunday, Nov. 7, for the “Run With The Saints” 5K Road Race, starting at 11:35 a.m. at St. Luke’s Church, 1864 Post Road. — an announcement from Darien police

The race should last about 45 minutes, a police announcement said. Anyone who wants to participate can register by midnight on Friday, but not on race day, itself.

Saint Luke’s Parish in Darien invites the community to lace up for the 5th annual Run with the Saints. The event benefits St. Luke’s work on behalf of an Episcopal parish in Cuba. The fundraiser, which takes place on Sunday, November 7 beginning at 11:35 a.m. (sharp), offers a choice of a 3-mile run or a 1-mile kids/adult walk, both along a beautiful route by the water. — an announcement from St.

The annual dinner will be a time to celebrate past athletic achievements of former Darien athletes and the funds raised will go to providing annual scholarships for Darien High School seniors (not just athletes) and supporting Darien Social Services. This year’s honorees include:

“We are proud to be celebrating the contributions of Darien athletic achievements for the past sixty years. This year’s honorees are an impressive selection of men and women who have impacted the Darien community and beyond with their athletic and civic accomplishments,” said Bill Peters, president, Darien Old Timers Athletic Association.

If you’re interested in pickleball or basketball, you can check out the new courts at Cherry Lawn Park on Sunday afternoon, where pickleball product showcases, demonstrations, skill challenges and free instruction from professionals will be offered. For basketball players, “fun and games and raffle prizes” will take place after a simple ribbon-cutting ceremony, Darien Parks & Recreation Department announced. — an announcement from Darien Parks & Recreation Department
The pickleball ribbon-cutting starts at 2 p.m. on Sunday, Oct. 17. The ribbon-cutting at the new basketball court is at 2:30 p.m., and the event wraps up at 3:30 p.m.
Here’s the full schedule of what takes place when:
PICKLEBALL COURT
2 p.m. — Ribbon Cutting
2:15 p.m. — Product showcase and demonstrations
2:30 p.m. — Free instruction with the Pros on the court
2:45 p.m. — Fun and games!

Jonathan Engelbrecht of Darien, formerly at the Tokeneke Club and Kings Highway Tennis Club, has been promoted to the position of tennis director at Chelsea Piers Connecticut in Stamford. — an announcement from Chelsea Piers Connecticut
Engelbrecht joined the Chelsea Piers coaching staff in 2016 as a lead professional and has consistently grown with the program coaching both adult and youth athletes.
“Jonathan brings to the role an accomplished background as an athlete and teaching professional,” said Kevin Burton, athletic director at Chelsea Piers Connecticut. “Beyond that, he has earned a reputation at Chelsea Piers and throughout Fairfield County as a thoughtful and steady leader who has the respect of his peers. As we began the national search for a director, we quickly concluded that the solution was already within our club.”
Engelbrecht has been teaching in the area for over 15 years. He’s a longtime resident of Darien, where he lives with his wife and twin daughters.

‘Knights for Aces’ Tennis Tournament for Kids and Teens, Aug 22 in Darien and Norwalk

Kids and teenagers of any skill level are invited to play in the Knights for Aces tennis tournament, coming Sunday afternoon, Aug. 22. — an announcement from Grassroots Tennis & Education
The competition, from 1 to 6 p.m., features round robin doubles tennis matches, starting on the courts of four clubs in Darien — Middlesex, Tokeneke, Wee Burn and Woodway. Participants are asked to arrive by 12:45 p.m.

After matches are played, the winning doubles team in each division will play in the finals at Grassroots tennis courts in Norwalk. Players and spectators are invited to enjoy pizza and refreshments, and winners will take home trophies and t-shirts.
Finals and food will be  at the William Rippe Tennis Center at Springwood Park, 11 Ingalls Ave.

The Darien Land Trust is inviting the town to come participate in two challenges to mark the trust’s 65th anniversary year — walks in three of the trust’s preserves, now through the end of July and a running event in October. — an announcement from the Darien Land Trust
Trails Challenge
First, the Trails Challenge takes visitors to three of its preserves with walking trails: Olson Woods, (at 31-1 Heather Lane) the Trails at Cherry Lawn (at 120 Brookside Ave.) and Dunlap Woods (near the end of Parklands Drive). (This Web page shows where each of the land trust’s preserves are located, although it doesn’t give addresses of the entrances.)

The Trails Challenge, which started this weekend and runs to July 31, is to visit all three sites. Participants must register through a QR code posted at each property to be entered into a prize drawing. Winners will be announced on our website and social media on Aug.

Chelsea Piers Connecticut has hired Doug Lennox, a 2008 Beijing Olympian, as head coach of the Chelsea Piers Aquatics Club. — an announcement from Chelsea Piers Connecticut
Lennox comes to Connecticut from Princeton University, where he served his alma mater for the last four years as the men’s assistant swim coach & recruiting coordinator. “After my experiences at Princeton, I feel it is time for me to return to my roots and work with younger athletes” Lennox said. “I am eager to bring my knowledge, experience and passion to age group and senior level student-athletes who are striving to compete at the collegiate & international levels.”

The search for a new coach identified candidates from across the country, Chelsea Piers Connecticut Athletic Director Kevin Burton said. Lennox is the first coach Burton has recruited.

Darien YMCA Gymnastics had a strong presence at the 2021 Level 4-6 State Championship on April 9 in Plainville. — an announcement from Darien YMCA

Over the past year, we have seen more people running than ever before. People of all skill levels took up running to stay active, get out of the house or replace their gym regimen. This online webinar, “Demistifying the World of Running” takes place from 7 to 8 p.m., Wednesday, April 14. — an announcement from Performance Optimal Health

After choosing running shoes, finding new trails and building up your stamina, you may now be thinking, “where do I go from here?” Maybe you want to build up your confidence, or you want to find a community to run or walk with. Join Britt Gunsser, DPT, CSCS, and Darien Running Company owner Megan Searfoss as they discuss the recent spike in new runners, how apps like Strava brought people together when they were apart, and how to find your place in the world of running.

We’re talking hockey with legendary announcer Mike Emrick! Join co-author Kevin Allen online as he sits down with Mike from 7 to 8 p.m., Tuesday, March 30, for a conversation about Allen’s and Emrick’s new book, Off Mike, and his life in hockey.

— an announcement from Westport Library

Please note: This is a virtual event. REGISTER HERE

After nearly 50 years behind the microphone, the voice of hockey in America opens up in a must-read memoir. Mike “Doc” Emrick has seen everything there is to see in a hockey game. Sizzling slap shots. Commitment, courage, and camaraderie.

The Old Greenwich Yacht Club (OGYC) will host its 49th USS America Regatta in Captain Harbor on Saturday, Sept. 12. — This article is from GreenwichFreePress.com. The annual sailing competition was established when officers from the USS America (CV-66) donated the trophy to OGYC in 1971. A skipper from the aircraft carrier reportedly won an OGYC race, and his crew was so pleased with the victory that they gifted the trophy to the yacht club.

A store offering running supplies and events, Darien Running Company, will open this July at 14 Brook St., next door to the Sugar Bowl, in downtown Darien, its owner announced Thursday morning. Megan Searfoss, who cofounded an associated store, the Ridgefield Running Company, in  2014, announced the new location in the RRC’s newsletter. The RRC had plans to expand before the COVID-19 epidemic, which forced a lot of changes on the business. Despite the pandemic, Searfoss said, she decided to go forward with plans for the new store, which she abbreviates as “DRC.” “DRC will offer the same services as Ridgefield Running Company, now retooled to provide a safe and trusted environment,” Searfoss said.

Marinas, boatyards and marine manufacturers in the tristate area will be allowed to open for personal use as long as strict social distancing and sanitization protocols are followed, Gov. Ned Lamont, New York Gov. Andrew M. Cuomo and New Jersey Gov. Phil Murphy said in an announcement on Saturday. — an announcement from Governor Ned Lamont’s Office

Chartered watercraft services or rentals will not be allowed, and restaurant activity at these sites must be limited to take-out or delivery only, like anywhere else in the three states. This announcement aligns the policies of the three states on this particular service. Governor Lamont explained that in Connecticut, this multi-state alignment is an affirmation of the state’s current policy, and marinas and marina repair remain on the essential business list. Governor Lamont said, “Our states share workforces, resources, public transit, and we all have share a connection on the water.