One of nature’s oldest – but diminishing – beach mating rituals is about to begin its annual springtime cycle, and The Maritime Aquarium at Norwalk needs volunteers to help document it.

During the new and full moons each spring, horseshoe crabs come up out of Long Island Sound to spawn in the sand. It’s a perfect time to place tags on the animals for an ongoing horseshoe crab census, which has helped to show a steady decrease in their local population. Despite this decrease, enough crabs still come ashore that the Aquarium staff needs volunteers to help.

“Joining this effort helps to provide important data about this amazing creature, which has survived since before the time of the dinosaurs but whose numbers are struggling,” said Bridget Cervero, Senior Education Manager for the Aquarium. 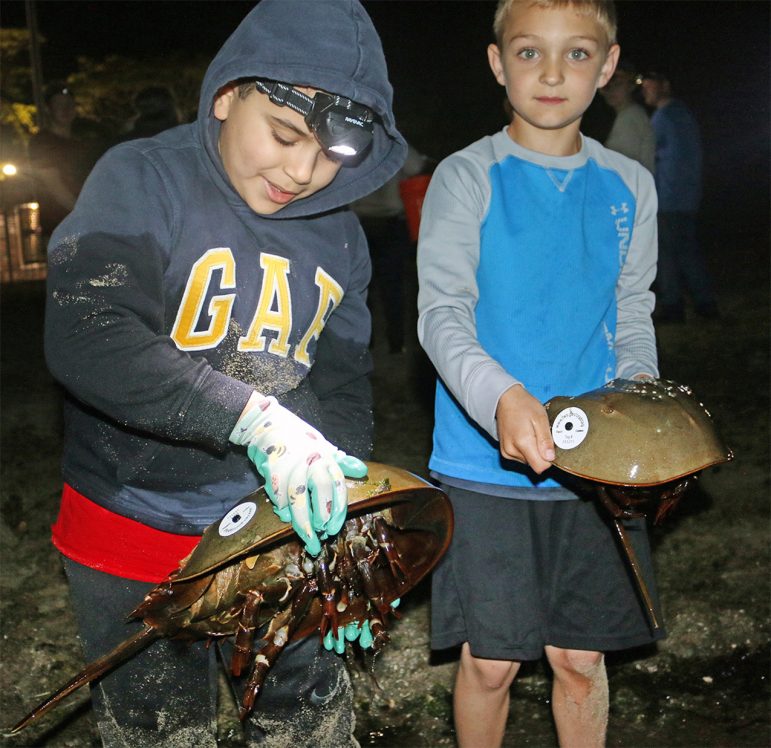 Two young volunteers place horseshoe crabs back in the water during a previous tagging session led by The Maritime Aquarium at Norwalk. The taggings are part of an ongoing census that has helped to document a steady decline in Long Island Sound’s horseshoe crab population over the last 20 years.

“The tagging nights are also a wonderful community-science activity for parents and kids; to step into the middle of this natural occurrence that’s been happening for millions of years and to play a helpful role for their future,” she said.

Before participating, volunteers must attend one of two free in-person training sessions at The Maritime Aquarium: at 7 p.m. on either Thursday, May 12 or Wednesday, May 18.

They’ll learn about the natural history of horseshoe crabs, about the census, and how to harmlessly tag the crabs. Volunteers must be age 18 or older. Younger children can assist if working with a parent, teacher or guardian. (If you’ve helped tag crabs before, you don’t need to attend the trainings.)

Volunteers also must be able to be out after midnight for the crab-tagging sessions at Calf Pasture Beach in Norwalk on select nights in May and June.

Survivors from the Paleozoic Era, horseshoe crabs (Limulus polyphemus) are readily recognizable for their domed brown bodies, pointed tail and “book gills” underneath.

Although they appear spiky and dangerous, the crab’s pincers and tail are harmless.

As evidence of the creature’s popularity, The Maritime Aquarium’s annual crab-tagging events – despite occurring after midnight — are among its most popular community-science programs.

The taggings are part of The Maritime Aquarium’s participation in an ongoing census of horseshoe crabs in the Sound being led by Dr. Jennifer Mattei of Sacred Heart University in Fairfield.

Dr. Mattei’s census is helping to show that the horseshoe crab population in the Sound has declined over the last 20 years. That has a ripple effect on the Sound’s ecosystem, because horseshoe crab eggs are an important food source for migrating shorebirds.

“Through their feeding activity, horseshoe crabs are also important ‘bioturbators,’ turning over and mixing the top layer of sediments on the sea floor. Their shells are even host to other organisms, like barnacles. Many other species in the Sound depend on the health of the horseshoe crab population.” 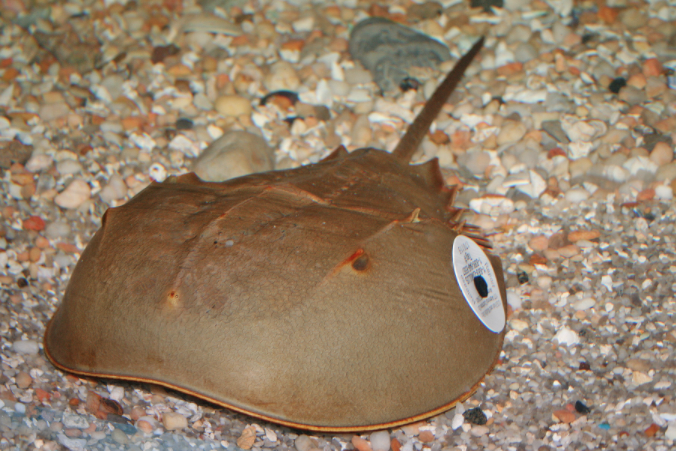 A horseshoe crab sports a tag as part of an ongoing census of the animals in Long Island Sound. (All the coolest horseshoe crabs are wearing them.) The census, led by a professor at Sacred Heart University, has helped to document a steady decline in the Sound’s horseshoe crab population over the last 20 years.

Horseshoe crabs in the Sound – and along the U.S. Atlantic coast – have been affected by a number of factors, including overharvesting (as bait for whelk), habitat loss, pollution, bycatch in abandoned lobster pots, and motorized vehicles on beaches.

The crabs also are commercially harvested for use in the biomedical industry. (A derivative from the crabs’ blood is used in medical testing. Crabs are returned to the water after their blood is drawn, but not all survive.)

In response to the population decline, The Maritime Aquarium operates a Horseshoe Crab Culture Lab to study how to best cultivate the animals in order to improve husbandry techniques and to sustainably manage populations in human care, with the goal of reducing pressure on wild populations.

Aquarium guests can learn about the issues affecting the species and follow the tiny crabs’ growth in the lab, which was created in 2019 thanks to a gift from Richard and Kim Alexander of Rowayton and their family’s Ballard Foundation.

To sign up or for more details about the horseshoe crab tagging trainings, go online to www.maritimeaquarium.org/community-science.

Again, if you’ve helped tag horseshoe crabs before, you don’t need to attend a training, but please send an email to bcervero@maritimeaquarium.org to sign up for one of the upcoming tagging nights (again: at 7 p.m. on either Thursday, May 12 or Wednesday, May 18). 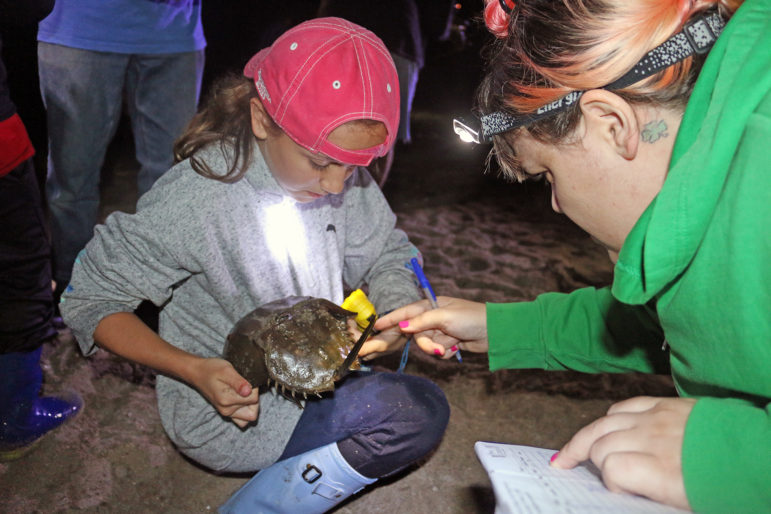