A mood of quiet excitement filled the gym on Jan. 8.

“Let’s go! You got it!” The calls rang out, with Darien gymnasts encouraging each other to jump higher and finish stronger on vault, bars, beam, and floor.

— an article by Holly Russell, on behalf of the team

The team finished with a 126.65 to beat Wilton and New Canaan — in person this year rather than virtually, which meant that for the first time since the start of the epidemic, the athletes could cheer for their rivals in person, too.

“Go, Wilton!” — that was Wave Co-Captain Sommer Schmidt’s shoutout to a Warriors gymnast before Schmidt started her floor routine.

“It feels good to be back,” Schmidt said. All Around Co-Captain Megan Cutler agreed. “We’ve shown a lot of new skills today,” she said, including sills on bars, sophomore Bella Koproski’s half pirouette and sophomore All-Around Julia Decsi’s shootover — a flying release from the high bar to the low bar.

Freshman Annabel Clas started the competition on vault with a strong 7.4. Junior Olivia Perkins’s high, twisting half on, full off, 8.4, earned Darien’s top score for the round and for the meet.

On bars, junior Alex Decsi connected all of her skills. Sophomore All Around Anna Primmer also hit her marks with clean execution, topped only by Julia Decsi, 7.7, and Perkins, 7.85.

“I’m excited to see how the season goes,” said Coach Kimberly Donovan, new this year and a former Fairfield Warde gymnast who also competed for the Darien YMCA team. 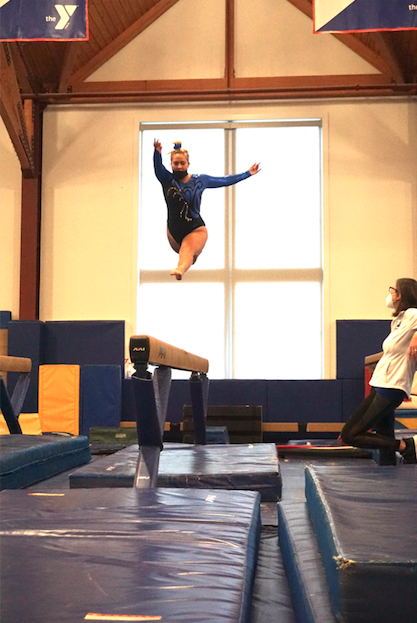 The athletes are “in a good place,” said Head Coach Judy Zakim. “I hope everybody stays healthy and continues to improve.”

Illness, among other factors, required gymnasts — including Co-Captain Maggie Russell, freshman Emma Kennedy, and sophomores Fiona Garfield and Annelise Enters — to support the team from the sidelines.

Injuries forced juniors Abby Kissko and Mia Macdonald off the mats for the whole season. They became team managers instead, putting up signs, helping judges with scoring, and in general, “making sure we’re on task,” Macdonald said.