It should have been done by now.

2018 was the expected completion date of the new railroad tunnels under the Hudson River, first proposed in 2009. At that time the $9 billion project was the biggest infrastructure project in the country. Now it may finally happen.

Why do rail tunnels from New York’s Penn Station to New Jersey matter to us here in Connecticut? Because they are the weakest but most crucial link in the northeast corridor, home to 23% of the U.S. economy. Imagine trying to get to Philadelphia or Washington without Amtrak running through our state, into those tunnels and to points south. 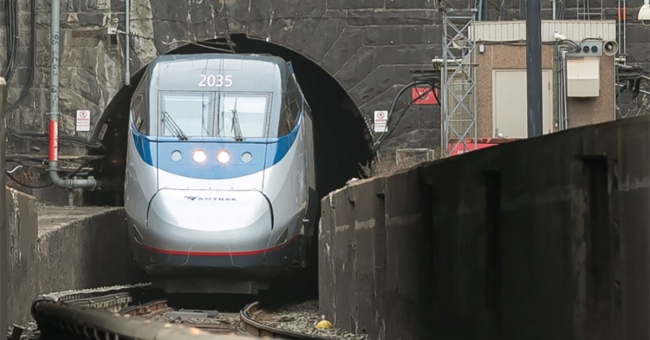 An Acela train found in the wild, emerging from a hole in the ground

There are 23 bridges and tunnels connecting Manhattan from the north and east. But between that island and New Jersey there are only six — two of them those rail tunnels built in 1910. And when super-storm Sandy flooded those tunnels in October 2012 with 3.5 million gallons of salt water, their lifespan was shortened by decades due to corrosion. They need to be augmented and repaired.

If one of those two rail tunnels were to fail, the entire nation would be in an economic crisis. We had a taste of that last week when Amtrak closed one of the tunnels for a couple of hours due to a track problem, backing up the morning rush hour as dozens of trains queued up even as others broke down, further clogging the tubes.

New York’s Penn Station was never built to handle the 430,000 daily passengers it handled each day pre-COVID (vs the 750,000 who enter the much-larger Grand Central Terminal). Amtrak, NJ Transit and the Long Island Rail Road then carried twice as many riders at Penn as New York’s three airports combined.

North River Tunnels under the Hudson River. Is there a light at the end of that thing?

New Jersey and Pennsylvania residents alone make up 16% of Manhattan’s workforce. Their rail commuting options are so tight that many must rely on the 7,700 daily commuter buses that bring them into the commuters’ nightmare known as The Port Authority bus terminal.

All that could have changed if the 2009 plan to build additional rail tunnels had gone through. But then, along came Chris Christie, the newly elected governor of the Garden State who balked at the cost and pulled the plug.

Cynics say that he did so to instead spend money on highways and keep the state’s gasoline tax low for another few years, even after repaying Uncle Sam for $95 million already spent on the rail project.

Hudson Rail Tunnels. Think this looks old and ugly? You should see the politics surrounding it.

During the Trump administration the president dutifully avoided even promises to do anything about the tunnels, Ignoring the city where he made his fortune, out of sheer spite.

But now there’s new hope: an agreement between New Jersey and New York’s governors to share the cost of the first phase, a staggering $14 billion for the local share of the aptly named Gateway project. Then, it’s hoped, the Feds will chip in the other half.

As the always-prescient 93-year-old Regional Planning Association points out, the tri-state area cannot afford to not build for the future just as those before us did, leaving us an infrastructure now almost a century old and crumbling from neglect.