James Ryan Morrison died Nov. 14, 2021 in Spokane, Washington, with son Jameson and carers Samantha and Syvanna at his side. It was one day after his 97th birthday and three nights after polishing off a whopping great slab of apple pie before going to sleep. 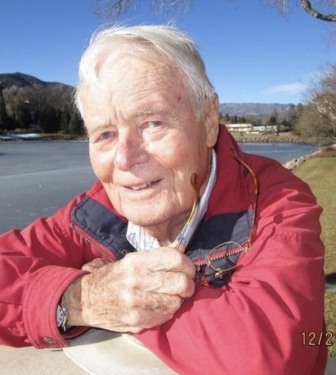 He was born Nov. 13, 1924 in Pawling, New York during the Coolidge Administration. He started smoking at four, setting the garage on fire and leaving smoke marks that remain today.

He left the Taft School in Watertown, Connecticut to serve in World War II, fixing B25s; B17s and P51 Mustangs in Africa. His contributions to the Allied war effort would later mystify his wife and children who endured his endless battered Chevys.

He graduated from Bowdoin College after the War and traveled across Europe with a shaving kit and a camera to begin a career that spanned 7-plus decades. His work encapsulates filmatic moments that have secured their place in the U.S. National Film Archives, The National Media Museum in Bradford, England, and in U.S. advertising pop culture.

He was among the last pioneers of Cinerama, the ground-breaking widescreen process introduced in the 1950s that projected images from three synchronized 35 mm projectors onto a huge, curved screen. Morrison was editor on the first two Cinerama epics including “This is Cinerama” and “Cinerama Holiday.” He served as assistant director on “The Seven Wonders of the World” and filmed an erupting volcano while perched in the side waist gun port of the B25 flown by notable movie stunt pilot Paul Manz.

They were introduced because she, a recent grad of Vassar, was interested in working in television and he was a producer on “The 60,000 Question,” then the top show on CBS.

Anne passed away in 2017 and never left him.

In the early 60s, Morrison wrote and produced the first six-minute commercial to run on TV, hiring a young John Williams to score the soundtrack. Morrison also produced several iconic ads, uniting the Chevy truck brand with the American West.

In 1969, he, Anne and their children moved to the Springs, and he founded his own company, writing and directing corporate films for AT&T, GM; MasterCard; the U.S. Army Corps of Engineers; the government of Saudi Arabia and the Taft School.

In 1986, he produced “The Race to the Clouds: The Story of the Pikes Peak Hill Climb” for Audi. In the 90s, he wrote and directed a pilot for PBS hosted by Walter Cronkite, filming on the flight deck of the USS Teddy Roosevelt while deployed in the Persian Gulf.

He wrote four books, including: “Treehouse,” set during the Vietnam War; “The Stuff Americans are Made Of,” examining Amercan cultural influences; and “Birdie,” a biography of Birdie Tebbetts, the All-Star catcher of the Boston Red Sox. He completed his last novel in 2019: “The Cost-Effective Life of Beno Bigelow,” the story of an adventurer who unwittingly becomes a part of all he has seen, from Pearl Harbor to the collapse of the Berlin Wall.

Morrison survived both service in World War II and a COVID infection in 2020.
He adored his grandchildren; broadcasts from the Metropolitan Opera; Klondike Bars and his conviction that America should initiate National Service to encourage all young people to serve their communities. In the last weeks of his life, he posted shots of his daily walks in his WWII uniform to raise awareness for Veteran’s suicide prevention.

He is predeceased by his wife, Anne Sloan, and sisters Elaine (Steve) and Jane (Robert) and brothers Milnor (Marie) and William (Eileen).

He is survived by his children: Mandy; George (Miriam); Jameson; Lucy (Richard) and Emily (Hanif). His zeal persists in grandchildren Ruthie, Evan, Tallulah, Kahlil and Noah. In his extended family, he is survived by his sister-in-law Eileen Morrison and 29 nieces and nephews—all of whom suspect he might still drop in for a visit, unannounced.

He brought down the house with every wedding toast he ever gave, yet he could not make it through a single Thanksgiving or Christmas dinner without dissolving in tears while attempting to say grace. He cared deeply about the moments of wonder in the everyday. This is his legacy.

“It’s not the thing that’s beautiful,” he said to his daughter once while driving west on 21st at sunset. “It’s this light in this moment that makes things beautiful. And you better catch it now kid, because it will vanish in an instant — and then it’s gone.”

His family will be holding a service at 10 a.m., Thursday, the 11th of August, 2022 at St. Paul’s Catholic Church in Colorado Springs, Colorado. All friends and family who wish to join in a loving send-off are welcome.

— This obituary was published by The Gazette of Colorado Springs, Colorado on Legacy.com, where online condolences may be left.