Jonathan Engelbrecht of Darien, formerly at the Tokeneke Club and Kings Highway Tennis Club, has been promoted to the position of tennis director at Chelsea Piers Connecticut in Stamford.

Engelbrecht joined the Chelsea Piers coaching staff in 2016 as a lead professional and has consistently grown with the program coaching both adult and youth athletes.

“Jonathan brings to the role an accomplished background as an athlete and teaching professional,” said Kevin Burton, athletic director at Chelsea Piers Connecticut.

“Beyond that, he has earned a reputation at Chelsea Piers and throughout Fairfield County as a thoughtful and steady leader who has the respect of his peers. As we began the national search for a director, we quickly concluded that the solution was already within our club.”

Engelbrecht has been teaching in the area for over 15 years. He’s a longtime resident of Darien, where he lives with his wife and twin daughters. 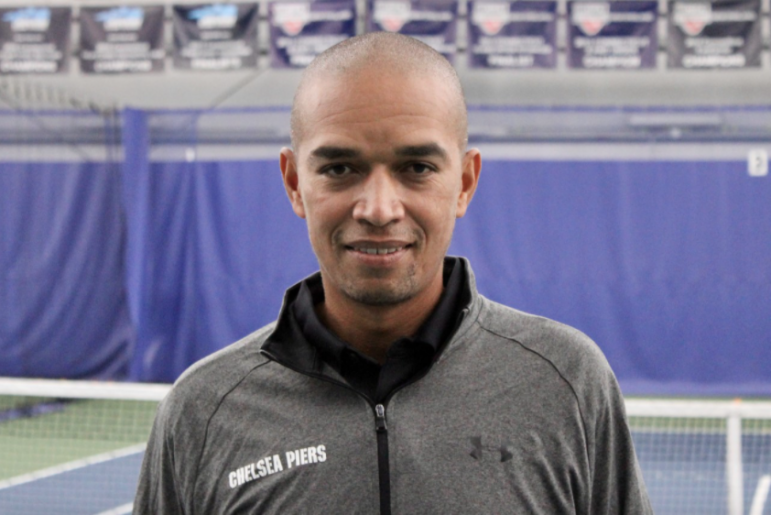 “Chelsea Piers is such a unique facility. I have the opportunity to work with beginners as well as collegiate hopefuls,” Engelbrecht said. “It is exciting going to work every day and working with passionate people dedicated to teaching every age level and helping members achieve goals whether it is a college career or refreshing a childhood passion.”

He spent several years as the assistant director at the Tokeneke Club, where he organized junior programs from red ball all the way to elite prospects preparing for college tennis.

At Kings Highway Tennis Club, Engelbrecht coached USTA Teams starting at the 2.5 level up to 4.0, and organized numerous events.

SEE ALSO: ‘Knights for Aces’ Tennis Tournament for Kids and Teens, Aug 22 in Darien and Norwalk

He grew up playing tennis in Johannesburg, South Africa. His entire junior career he was ranked in the top 10 in singles and doubles nationally.

At the age of 16, he was selected to represent South Africa at the South American Tennis Championships. At 17, he competed internationally and acquired a junior world ranking for singles and doubles.

Engelbrecht graduated and received a scholarship to play at the University of Utah. In his sophomore year, Engelbrecht transferred to Weber State, also an NCAA Division 1 school in Utah.

There he played number one singles and doubles for the remainder of his college career. He captained the team his junior and senior years and won MVP both years as well. Engelbrecht was named All-Big Sky Conference player numerous times.

Editor’s note: Darienite.com commonly publishes news releases or announcements (like this one) from various organizations, often with minimal editing. When we do so, we may change wording, reorganize parts of the announcement, add hyperlinks or add or remove information if we think our readers benefit from our doing so. (To a far lesser degree, we do the same with obituaries.)

If we think certain wording amounts more to advertising than news, we remove it. Advertising is separate on Darienite.com. If, in the future, any articles are “sponsored” — published for a fee — that will be made clear with a prominent label.

Announcements are always labeled near the top of the article, and no byline other than “Darienite.com” appears. Most local news organizations do the same, sometimes completely rewriting, often not rewriting and usually not labeling the article as entirely or almost entirely from one source. (Police news releases are always completely rewritten, with any exceptions noted.)