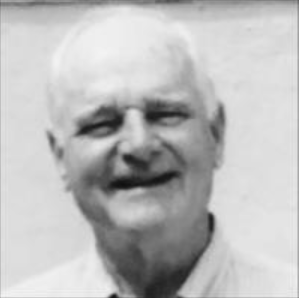 Thomas Clark Moseley Sr., 93, of Woods Hole, MA, a beloved patriarch and scion and a Harvard athlete, passed away on Sept. 16.

He was born in Boston as the youngest of five children (and the only child to be born in a hospital).

Raised in Dover, MA, he graduated from the Westminster School, Class of 1942, where he was captain of both hockey and baseball teams, as well as Co-MVP football and school prefect.

A member of Harvard’s Class of 1946, he was a member of the AD and Hasty Pudding, played football and hockey, and quarterbacked an undefeated JV football team. He declined an offer to play pro-hockey for the Boston Olympics at $100 per week, a lot of money in 1949.

Legendary college hockey historian Kip Farrington named Tom and his brothers Fred and Bill (all from Massachusetts) to the Collegiate All Stars during set time periods in his book Skates, Sticks, and Men.

During World War II, before Air Corps flight schools were closed, Tom logged 10 hours flying Aronka planes on skis in South Dakota. All from the school were sent to the infantry instead of becoming officers as pilot, navigator or bombardier.

He then served in the Third Army, earning the Combat Infantry Badge and three Battle Stars in the Battle of the Bulge, Belgium, and Germany (France). Tom’s father was, in World War I, in the same 76th Division as Tom.

Tom became a corporate executive of Union Carbide in New York City and Danbury, Connecticut, traveling extensively on domestic and international business, and on occasion, exploring with Wisty.

He was a long-time resident of Darien; Naples, Florida; and Woods Hole, Massachusetts.

He was co-founder and president of Morningstar Association and Windstar Golf Association and a co-founder of the club. A frequent volunteer, he worked with the Conservancy of Southwest Florida, Yale Career Services, Meals on Wheels (in Florida and Massachusetts), and coached, refereed and umpired sports.

Tom initiated an Audubon Sanctuary, culminating in an “Audubon International Award,” as one of 200 environmental courses in the United States. Tom was an incredibly well-read, informed person, and a source of great advice and wit.

He regularly sent his children and grandchildren letters with clippings of novel slants on things that might be of interest to them. His quest for learning and adventure never waned — attending lectures, musical concerts, and attending Harvard football and hockey games or the games of his children/grandchildren, for which he would travel great distances.

His fierce competitiveness was unmatched, and at the golf course he always sank the difficult putt with the match on the line. Tom played men’s hockey into his 50s, including participating in the hockey senior Olympics, sailed competitively for many years on Long Island sound, and played for his company’s and club’s men’s golf and tennis teams.

Finally, his unselfishness with his time, intellect, and resources made him indispensable to every organization of which he was a volunteer or member. If you wanted to get something done you would call Tom Moseley.

He is pre-deceased by his parents, Mary Livingston Rice and Frederick Russell Moseley of Dover, MA; his brothers Fred, Bill, and Bob; his sister, Ardelle Fullerton; and his son, Tom.

A celebration of his life is planned for 10:30 a.m., Saturday, Oct. 6 at the Church of the Messiah in Woods Hole, MA. Reception will be at the Woods Hole Golf Club, where the flag is flying at half-mast to commemorate his vibrant personality, popularity and contributions to that golfing community.

Nancy Quackenbush Melson, beloved wife, mother of five children, passed away March 24, 2021, in San Diego. Born Adriana Suydam Quackenbush on Dec. 2, 1930 in Darien, she attended Darien schools, the Wood Business School in New York City and was a bookkeeper and worked in real estate. She was married 2000 to Richard J. Bounty and they lived in Darien and Redding with their five children. Several years after Richard’s death, she married Bob Melson.

Ramsey Ellsworth Joslin passed away peacefully on March 17, 2021, surrounded by family, after a long battle with Alzheimer’s disease. He was 94 years old. He is survived by his wife of 66 years, Sally (Sutphin) Joslin. Ramsey was born in 1927 in Cleveland to Carl and Augusta (Ramsey) Joslin. The family moved to Farmington when Ramsey was 10 years old, which is where he and his younger brother, Brooks, spent the remainder of their childhood — and where he met his future wife, Sally.

Peter Van Vleet Young, who grew up in Darien, passed away on March 25, 2021 at home in New Canaan, with his family by his side. He was 84. Peter was born in Stamford, May 6, 1936, to Lloyd and Dorothy Young. He graduated from Berkshire School and Suffolk University. Peter married Georgia Schenck of Grosse Pointe Michigan in October 1958.

Gillet Lefferts Jr. of Rowayton, formerly of Darien, passed away peacefully at home on March 30. He was 97 years old. Gil was born in Turtle Bay, New York on May 6, 1923, raised in New York City. He attended The Allen-Stevenson School and Deerfield Academy. A proud member of the Class of 1945, he graduated from Williams College in 1947 and earned his degree in architecture at Princeton University in 1950.

Theodore B. Seelye, formerly of Darien, passed away peacefully on March 9. He was 69. He is survived by his wife, former Darien Representative Town Meeting Moderator Sarah C. Seelye. Born Sept. 25, 1951 in Philadelphia, he was the son of Mary S. Seelye, who survives him, and the late James B. Seelye, both of Philadelphia.

Linda H. Osberg “Lindy” passed away peacefully surrounded by her loving family on Friday, March 19, 2021, after a long, hard-fought battle with Alzheimer’s. She was 78. Born in Washington, D.C. on Jan. 18, 1943 to the late William Lanier Harper and Virginia Groves Harper, Linda grew up in Shaker Heights, OH, where she graduated from Shaker Heights High School in 1961. She went on to attend Green Mountain College in Poultney, Vermont, receiving an A.A. degree in education and psychology.

Jeanne McBeath Smith, widow of Bishop F. Smith, Jr., passed away peacefully and gracefully on Jan. 19, 2021. Born in 1927, she was the daughter of the late Mary and John McBeath of Washington, D.C. and Boca Raton, Florida. Jeanne graduated from the Ogontz boarding school and Junior College in Rydal, Pennsylvania in 1947 and received a bachelor’s degree in psychology from the University of Maryland, where she was a member of Kappa Kappa Gamma Sorority. She loved teaching and attended Emory University for post-graduate studies in education.

Harriet Virginia Paine Caldwell — Ginny to all who knew her — peacefully passed away on Thursday, March 18, 2021 in Overland Park, Kansas. A wife, mother, sister, Grammy, Great Grammy, aunt, and friend to many, at 95 years old she held many titles and left this world knowing how much others loved her. She was born on July 31, 1925 in Baltimore. She was the oldest of seven siblings and will be forever cherished by her two living sisters — Merrie Frances Miller and Catherine (Kitty) Louden. Ginny was raised in Baltimore and moved to the Kansas City area in her teens, graduating from Shawnee Mission (now North) High School in 1943.

Jerome “Jerry” Auclair passed away peacefully at home in New Haven on March 11 after a 20-month battle with pancreatic cancer. Jerry was born in 1945 in Springfield, Massachusetts, the second of four children of Alcide and Edna Auclair. He graduated from South Hadley High School in 1963 and from the University of Massachusetts in 1967 with a B.S. in mathematics. Jerry began an illustrious 52-year career in education at Nonnewaug High School, where he taught math, coached baseball, was athletic director, and eventually assistant principal. In 1972 he was awarded an M.S. in Education, and in 1976, at the young age of 30, he became principal of Somers High School, where he served for 11 years before becoming principal of Southington High School in 1987.

Joseph P DiRollo was called to heaven on March 5, 2021 He was 92. A resident of Norwalk for 61 years, Joe was a small business owner in Darien for 21 years and 10 years in Greenwich. Born on Feb. 18, 1929 in Mamaroneck, New York, to Theresa and Peter DiRollo. Joe grew up with four sisters and four brothers.

Jay B. Kane passed away March 15. He was 89. Jay was born on June 4, 1931 in the home of his grandparents at 125 Buckingham Road in Brooklyn, New York. His parents were Margaret Brassler Kane and Arthur Ferris Kane. When he was a child, Jay accompanied his parents to museums where his mother, a prominent sculptor, exhibited her work.

Dora Spielmann of Needham, Massachusetts passed away peacefully on March 14 after a long and courageous battle with dementia. She was born in Lima, Peru but spent a great part of her life in New York City and Darien. Dora was a very active volunteer in the Darien school system, the DCA Garden Club and the former Tots N’ Teens consignment shop. But most of all, she was a loving, devoted and caring person to family and friends. Dora is survived by Josef, her loving husband of 55 years; her son, Martin, and his wife, Suzanne McLaughlin, and their children, Claire, Joseph, Peter and Anna.

David H. Crandall died peacefully on March 13 with family by his side. He was 89. Born in Oswego, New York, Dave raised his family in Darien where he was exceptionally active in the life of the community, from church vestry member to volunteer firefighter. He also served on various town committees, ultimately becoming chairman of the Darien Board of Finance. After graduating from Colgate University in 1953 and then serving as a captain in the Marine Corps, Dave met Jane Fox in New York City.

Katharin Henrietta Baker passed away peacefully at Notre Dame Convalescent Home on March 6, 2021. She was born on June 10, 1924 in Butte, Montana to Katharin and William Harvey. She is predeceased by her husband, James M. Baker, and her brother, William Harvey. Katharin grew up in rural Montana. She attended Montana School of Mines.

Ann “Daisy” Moylan Connell, 88, of Norwalk, passed away Friday, March 5 at her home, surrounded by her children 2000 and grandchildren. Born in Brooklyn, New York, on Aug. 31, 1932, she was the only daughter of the late Hugh Michael Moylan and Marie Dermody Moylan. Ann graduated in 1954 from Notre Dame College of Staten Island, New York with a Bachelor of Arts degree in education. She taught at Notre Dame Academy on Staten Island and with the New York City Public School System, retiring in 1965.