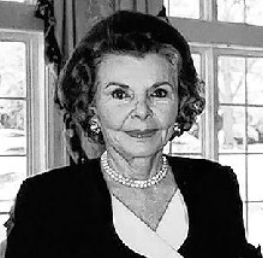 Born in 1927, she was the daughter of the late Mary and John McBeath of Washington, D.C. and Boca Raton, Florida.

Jeanne graduated from the Ogontz boarding school and Junior College in Rydal, Pennsylvania in 1947 and received a bachelor’s degree in psychology from the University of Maryland, where she was a member of Kappa Kappa Gamma Sorority. She loved teaching and attended Emory University for post-graduate studies in education.

Her father’s construction company, John A. McBeath and Sons, built many noted buildings, including the Jefferson Memorial, the Pentagon, the Shrine of the Immaculate Conception, the Tomb of the Unknown Soldier, and the State Capital of Utah. His business brought the family to Atlanta, where she met and married her husband, Bishop, at St. Luke’s Episcopal Church in 1950.

Bishop’s career with Celanese Corporation moved the family to Charlotte, where their three daughters were born. Jeanne was active in the Junior League, the Daughters of the American Revolution and golf at the Charlotte Country Club, while raising three girls.

After several years in Charlotte, Celanese Corporation took them to the New York City area, where they resided in Darien. Jeanne continued to be active in the Junior League, DAR, their church, bible studies, bridge club, snow skiing and golf at Wee Burn Country Club. They loved their time in the New York area and the many lifelong friends they made there.

After many years in New York, Bishop took the opportunity to start carpet mills in Edgefield, South Carolina, and the family moved to Aiken in that state, where they built a beautiful home near the Steeplechase race tracks.

After a number of wonderful years, Bishop sold the mills to a Fortune 500 company and enjoyed retirement in Atlanta, Naples, Florida, and Linville, North Carolina — special places where they could gather with their children and grandchildren and celebrate time together.

Jeanne and Bishop lived at Lenbrook Retirement Community in Atlanta for many years.

She was predeceased by her parents, her wonderful husband, Bishop, and her brother, John McBeath of Charlotte, North Carolina.

A private family memorial service was held at the Cathedral of St. Philip in Atlanta.

— This obituary was previously published by the Atlanta Journal-Constitution through Legacy.com, where online condolences may be left.