Katharin Henrietta Baker passed away peacefully at Notre Dame Convalescent Home on March 6. She was 96. 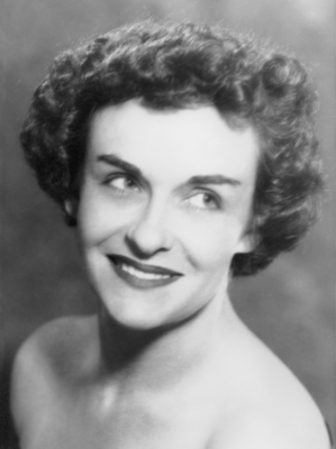 She was born on June 10, 1924 in Butte, Montana to Katharin and William Harvey. She is predeceased by her husband, James M. Baker, and her brother, William Harvey.

Katharin grew up in rural Montana. She attended Montana School of Mines, then pursued a singing career. She ventured on her own to Chicago and eventually settled in New York City, where she continued to pursue her lifelong passion of singing. In New York she performed in several musicals and operas including A Night in Venice, Oklahoma and Alice in Wonderland.

Katharin married James Monroe Baker in 1953 in New York City. They were active members of St. Bartholomew’s Church and the Community House Club. After the birth of their third child in 1960, the family moved to Darien, where their fourth child was born.

Kathy brought her sharp wit to social and family events. She loved dinner parties, entertaining the company of friends. As a member of Norwalk Yacht Club with her husband Jim, she also enjoyed excursions on Western Cloud the family sailboat.

After moving to Darien, Katharin continued to enjoy singing and performed at the Westport Country Playhouse among other local venues. She was a performing member of the Schubert Club for many years.

As a member of the congregation at St. Luke’s Church in Darien, Kathy found pleasure in many of the social and volunteer activities including the choir, scholarship committee and Women of the Well.

She volunteered her time for Person-to-Person, the Stamford Child Care Center and Senior Housing Authority in Darien. She enjoyed writing personal interest stories for local newspapers and worked as an assistant for several organizations including the Stamford Department on Aging.

Katharin had a life well lived. She told her children to broaden their horizons, and that was the mantra she lived by. Kathy delighted in periodic trips with her children to the theaters in New York City to see performances at Lincoln Center including Leonard Bernstein’s children’s concerts and Swan Lake Ballet.

In later years, she traveled extensively in Europe with her husband and brother as their guide. Kathy had a zest for life and a passion for different cultures and the performing arts.

After selling their home in Darien, Jim and Kathy moved to Atria of Darien, an assisted living facility. When Jim passed she moved to Notre Dame Convalescent Home in Norwalk.

Kathy is survived by her children and their spouses: Heidi Scheckler and her husband, Thomas, of Norwalk and Florida; Eric Baker and his wife, Mary, of Minnesota; Duncan Baker and his wife, Lupe, of Nebraska; and Lorna Young and her husband, Todd, of Norwalk. Her grandchildren are Samuel and Roger Scheckler, Drayton Baker, A.J. and Jessica Hernandez, Peter and Lila Young; and she had one great-grandson, Gracyn Hernandez.

The family will receive friends from 5 to 7 p.m., Friday May 21, 2021 at the Lawrence Funeral Home 2119 Post Road, Darien. A memorial service and celebration of Katharin’s life will be held at 10 a.m., Saturday, May 22 at St. Luke’s Church.  Interment will be private.