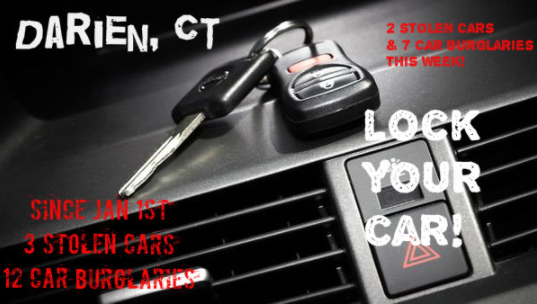 In a recent interview, Duane Lovello, who just-retired as Darien police chief, said that town residents who leave their cars unlocked are the “bane of our existence.”

Here’s a public announcement from Darien Police on the problem of unlocked vehicles, which points out that when you leave a car unlocked, it doesn’t just hurt you — it can potentially hurt others, especially if a stolen vehicle is pursued by police.

On Wednesday night, for example, an unlocked vehicle with keys in it was stolen in Stamford and crashed in Darien, according to Stamford police. Since the beginning of the year, 12 cars have been reported entered, many with items stolen from them, and there have been three stolen cars in town, according to police.

Yes, the Town of Darien is a very safe community.  So safe that residents don’t feel the need to lock their cars.  In fact, many choose to leave the keys in their cars, most likely for convenience.  As a result, a reputation has been established that Darien is very welcoming to car thieves.

So far, the reputation has held up in 2017, but we’re not alone.  Greenwich, Stamford, Norwalk, Westport, & Fairfield are some of the other towns experiencing similar problems.  We cannot fix what you’re doing.  Do not leave your cars unlocked.  Do not leave valuables in your vehicles either.  Lastly, never leave your ignition keys behind.

It’s been determined that the thieves responsible for these incidents are working in groups, between the ages of 14 and 21, are coming from all over the State, to areas known for residents who leave their cars unlocked, and go driveway to driveway checking vehicles until they find ignition keys.

Once the cars are taken they regularly are involved in high speed chases, accidents, robberies, and drug transactions.  Your valuables that were left behind including electronics, kids’ backpacks, garage door openers, personal identification, and other irreplaceable items, are gone forever. This presents obvious dangers to both civilians and police officers.

Please help us erase Darien’s reputation.  Thank you for your cooperation.  -From the men & women of the Darien Police Department #darienpolice #darienct #helpushelpyou #lockyourcar

You can see this statement on the back of Darien Police patrol cars: “LOCK YOUR CAR. EVERY TIME. EVERYWHERE.”

Darienite.com has a category for news articles about unlocked vehicles and homes: Unlocked in Darien.