Two Stamford teenagers, both 17, have been charged in connection with numerous cars being entered, several thefts from them and a stolen SUV after Darien police worked undercover in a surveillance operation, police announced Thursday morning.

During the past two weeks over 20 car burglaries and two stolen vehicles have been reported in Darien. In all of these incidents the vehicles were left unlocked and the ignition keys were in the vehicles that were stolen.

At approximately 1 a.m. today, undercover officers observed a male subject exiting the driveway of a Post Road residence in close proximity to the Stamford town line. Numerous recent car burglaries have occurred in this area. The subject was detained by officers and identified as a 17-year-old male from Stamford.

Through investigation it was determined that two nearby vehicles had been burglarized and the juvenile had proceeds from the burglaries in his possession. As the investigation continued, officers developed information leading to a second suspect who had fled the scene.

Selective Enforcement Unit officers then met with officers from the Stamford Police Department and were able to locate the second suspect at his residence in Stamford. The second suspect was also a 17 year old male.

Both juveniles were taken into custody and transported to Darien Police Headquarters for booking. Further investigation revealed that the juvenile suspect No. 1 was responsible for numerous Darien burglaries and the theft of a 2011 Land Rover LR4 from Darien on Feb. 16.

The Stamford Police Department arrested juvenile No. 1 when he was discovered driving in it on Feb. 18. Additional arrests are expected in that incident.

Juvenile No. 1 was fully processed and charged for 14 counts of third-degree burglary based on his involvement in incidents that have occurred over the past week.

Juvenile No. 2 was fully processed and charged for two counts of third-degree burglary for his involvement in the incidents that occurred this morning.

During processing juvenile No. 1 admitted to needing to acquire money for narcotics.

He was quoted as saying “Everyone knows you can go to Darien to get money,” referring to the amount of unlocked vehicles containing valuables and ignition keys that are present there.

Both juveniles were released to their parents and are scheduled to appear in court on Feb. 28, 2017 at 9 a.m. The Stamford Police Department Youth Bureau has indicated they will be following up with both juveniles and will be charging them for their involvement in numerous incidents that recently occurred in Stamford.

During the surveillance operation, three other Stamford men were observed dressed in all black and running along the Post Road near the Stamford town line. They were also detained by undercover officers.

Although these subjects all had significant criminal histories involving violent felonies, there was no probable cause to connect them to any recent criminal history and they were released from the scene.

It is presumed that the officers who detained these subjects located them prior to them having any opportunity to engage in criminal activity. This information was also passed along to the Stamford Police Department.

The investigation into the current car theft and burglary problem in our area by the Darien Police Department will remain ongoing. It will involve additional surveillance operations, the deployment of additional manpower, and the networking with surrounding agencies including the Stamford Superior Court and Stamford Office of Juvenile Probation.

Again, the Darien Police Department continues to implore residents to secure your vehicles. Do not leave valuables in your vehicles and never leave your ignition keys behind. Thank you.

The Connection Between Drugs and Crime in Darien

Part of a statement from Darien Police Lt. Jeremiah Marron, speaking about drug use and crime in Darien at a Jan. 19 public meeting:

Darien had — I think it’s probably an all-time high — 102 car burglaries in 2016; 34 burglaries of homes or businesses; and 15 stolen cars. A lot of arrests were made in a majority of these incidents, and it’s clear that a majority are being perpetrated by drug abusers.

And I bet you, if you asked any of the victims of any of these incidents, they’re going to whole-heartedly agree that there’s a drug problem in this community. […]

Every single day in Darien we respond to incidents that are somehow connected to this narcotic problem: As I mentioned, home and vehicle burglaries, larcenies from retail stores, DWIs, domestic violence and, obviously, overdoses, smash-and-grabs at cash registers and stand-alone ATMs, a high-speed chase just the other night.

I interviewed a burglary suspect at Bridgeport Correctional Center this past Tuesday, and it’s all connected to narcotics cases.

A Passage Worth Rereading from the News Release 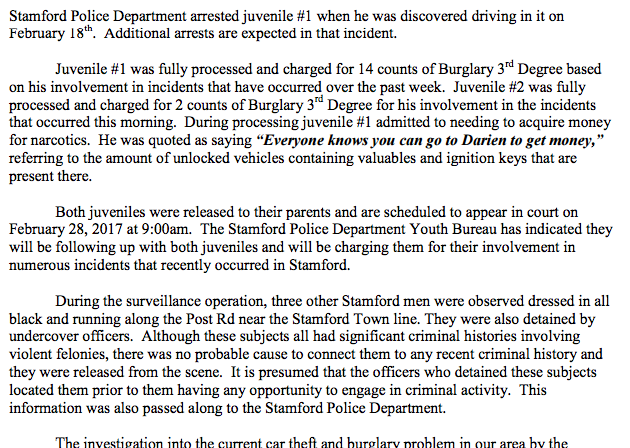 Some telling paragraphs from the Darien Police news release

Avert your eyes if you want to, but when we don’t even lock our car doors overnight, this is the result.