On the back of Darien Police patrol cars: "Lock your car. every time. Everywhere."

Sometime between late afternoon on Monday, Feb. 13 and Tuesday morning, several unlocked vehicles parked near homes in the southwestern part of town were entered, no items were taken from them, residents told police, who soon learned of other cars entered with owners who weren’t so lucky later in the week.

Two more cars were entered at 21 Wilson Ridge Road, and one — a white 2011 Land Rover that had keys in it — was stolen. That theft occurred sometime late Wednesday afternoon, Feb. 15.

At 1:23 a.m. the next morning, Stamford police found it with minor damage on the outside and a 17-year-old Stamford boy inside. The boy was issued a juvenile summons to appear in court. 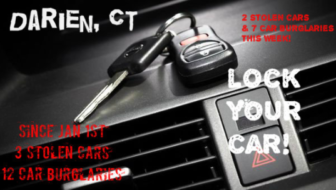 Then, sometime between late Sunday night and Monday Morning, Feb. 19 to 20, three vehicles parked outside of one Post Road home in the same area were entered, and items were stolen from each. In all, a total of seven vehicles were entered in the area.

Police repeatedly asked neighbors close to each incident whether they’d seen, heard or knew of anything suspicious about the car entries, but none of the neighbors had any information.

The spate of vehicle entries and thefts from vehicles caused police to issue an announcement on Thursday, Feb. 16, warning residents that unlocked cars could be stolen from — or stolen themselves. In part, the warning said:

Yes, the Town of Darien is a very safe community.  So safe that residents don’t feel the need to lock their cars.  In fact, many choose to leave the keys in their cars, most likely for convenience.  As a result, a reputation has been established that Darien is very welcoming to car thieves.

So far, the reputation has held up in 2017, but we’re not alone.  Greenwich, Stamford, Norwalk, Westport, & Fairfield are some of the other towns experiencing similar problems.  We cannot fix what you’re doing.  Do not leave your cars unlocked.  Do not leave valuables in your vehicles either.  Lastly, never leave your ignition keys behind. 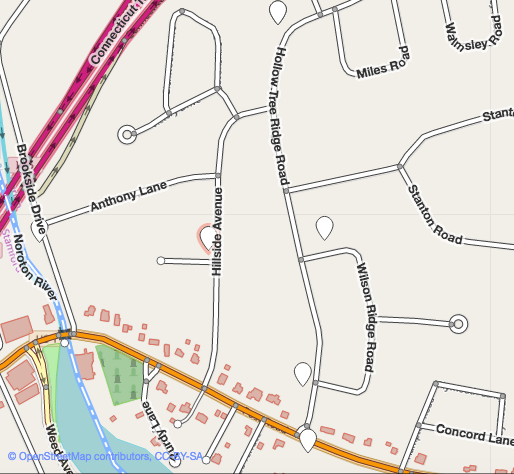 The nine vehicles entered were at six locations, none far from any of the others: On Brookside Drive (at the left edge of the map), Hillside Avenue, two places on Hollow Tree Ridge Road (including one at the very top of the map), on Wilson Ridge Road (near the center) and on the Post Road (at bottom). The location of each spot is marked on the map. Interstate 95 is shown in bright pink, the Post Road in orange.

Here’s a rundown on each of the thefts, with more details:

You can see this statement on the back of Darien Police patrol cars: “LOCK YOUR CAR. EVERY TIME. EVERYWHERE.”

20 Brookside Dr. — between 7 p.m., Feb. 13 and 7:20 a.m., Feb. 14 — a 2012 Acura MDX parked in the driveway was entered, but there were no signs of forced entry or tampering (the owner said she thought she’d locked it). A glove box and console had been opened and riffled through. Nothing was taken.

9 Hollow Tree Ridge Road — Sometime between 5 p.m. on Feb. 13 and 7:45 a.m. on Feb. 14, a 2016 Mercedes Benz was entered. The owner saw the driver’s door ajar, and the vehicle had been rummaged through. Nothing was taken. Police were told by the owner that at about 5 p.m. on Feb. 13, she had seen a male walk by, but police had no further information about anything suspicious regarding that person.

25 Hillside Ave. — A 43-year-old resident reported that an unlocked 2015 Volkswagen Jetta in the driveway was entered sometime between 8:30 p.m. on Feb. 15 and 7:30 a.m. The center console was found opened and riffled through. Nothing was reported taken.

2546 Post Road — between 11 p.m., Feb. 19 and noon, Feb. 20 — This is the third time thefts from unlocked vehicles at this address were reported to police by the victim. Three unlocked cars were entered and loose change along with vehicle registrations were taken from each, as well as some other items. A total of $80 in loose change was found missing. Glove boxes and center consoles were opened and riffled through. This is what was stolen from each car (not including the vehicle registrations):

A Different Kind of Theft from a Car

Also last week, a window was smashed in the parking lot near Walgreens at 138 Heights Road on Friday, Feb. 17. Aside from the smashed window, that situation was very different from the ones just described — the car was locked and $360 in cash was “plainly visible” on the passenger seat.

5 thoughts on “Nine Vehicles Entered, Some Missing Items & One Stolen in Southwestern Corner of Darien”