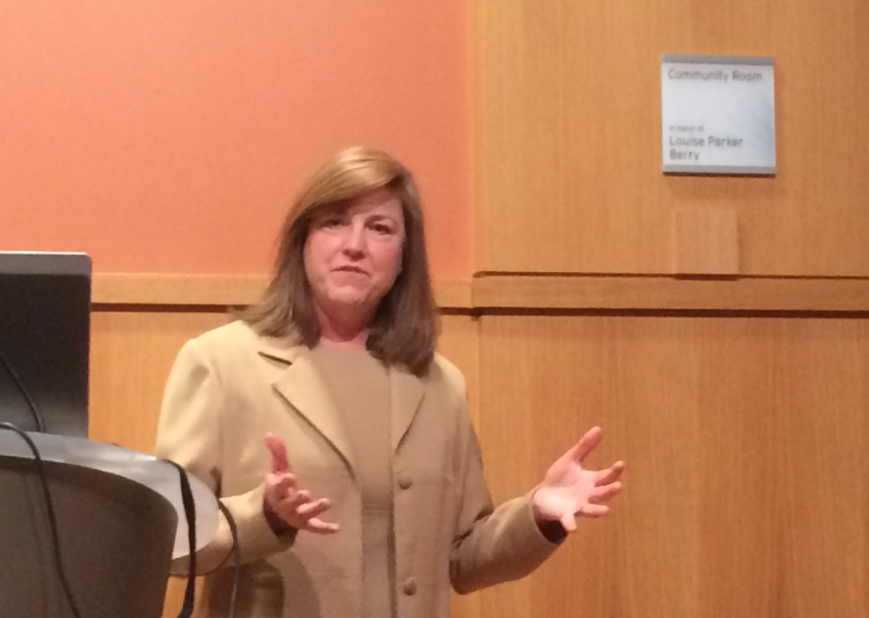 Darien teens drink more than their peers in similar towns, across Fairfield County, across Connecticut and across the United States. Their parents are drinking more than adults in other places, too.

And drinking has become more prevalent among middle school and high school kids between 2011 to 2014, especially among high school juniors and seniors.

Those are the results of surveys taken for or cited by the Thriving Youth Task Force, a coalition of Darien youth-related groups and professionals in the substance abuse and mental health fields serving Darienites. Later this week, the task force is expected to announce a campaign to turn that around in town.

But at a recent Darien Health Department forum held at Darien Library, Carrie Bernier, executive director of the Community Fund of Darien, gave a preview of what the task force found and gave some information on what it will be proposing.

Here’s an edited transcript of nearly all of what Bernier said.

“Darien actually ranks higher than average when you compare Darien to the state of Connecticut, the Fairfield County and national averages in general indicators of wellness and general life satisfaction, so we feel very lucky. I often feel like I’ve hit the jackpot to live in a community like Darien.”

“In 2008, the Community Fund of Darien, along with leaders of youth-serving organizations in this town came together to assess our youth and there were concerns about substance abuse and mental health among the youth population in town. 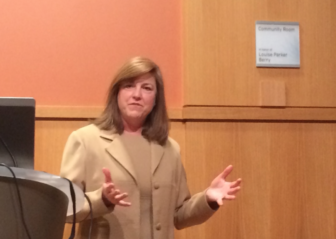 “We wanted a benchmark for some data, to see where the youth stood, and that group began surveying students every three years — seventh through 12 graders in the schools.

“And unfortunately we found over time, 2008, 2011 and 2014, the key indicators of mental health and wellness resiliency and coping skills that are linked to substance abuse later in life were getting worse instead of better.

“In 2015, with Communities 4 Action, the Thriving Youth Task Force wrote for and received a competitive grant from the [state] Department of Mental Health and Addiction Services a five-year strategic prevention plan for the town of Darien. Only 12 towns in the state of Connecticut were selected.

“We were thrilled to be selected — scared as well, because it showed that there truly was a problem.”

Data collected in surveying Darien youth, starting in 2015 often “correlated to what we see in the adult population.”

“Opioids is something that is in the news right now, but with kids, early on, what we started seeing was alcohol use — in particular, binge drinking — that was our priority substance that was identified as most prevalent […] for our teenagers.

“This past summer, the task force came together and found a strategic plan with professionals in the community, as well as substance abuse professionals aoutside this community who serve Darien populations.

“We looked at evidence-based strategies that are proven to work, especially culturally tailored to the needs of a town like Darien […] and then we start with implementation, which is where we are right now.

What They Discovered: Bad and Getting Worse in Darien

“So I’d like to share with you a little bit of the data that brought us to where we are and what we’re going to be doing, and what you can expect from the Thriving Youth Task Force and Community Fund over the course of the next few months. 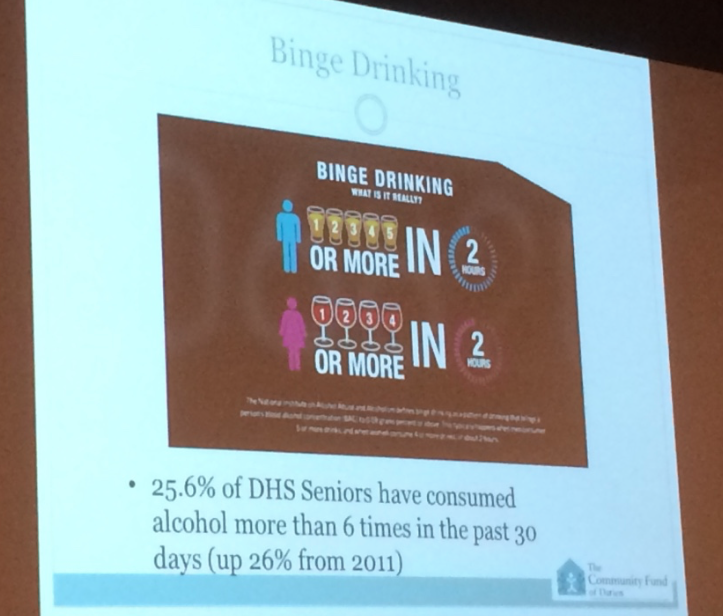 “The National Institute on Alcohol Abuse and Alcoholism defines binge drinking as a pattern of drinking that brings a person’s blood alcohol concentration (BAC) to .08 grams percent or above. This typically happens when men consume five or more drinks and when women consume more than 4 drinks in two hours.”

“And what we found in our last survey of teenagers was that 25.6 percent of Darien High School seniors consumed alcohol more than six times in the past 30 days. That’s considered heavy use, and it was up 28 percent from 2011.

Across the board, we saw results that were significantly up from our 2011 survey.

The number of teenagers in Grades 7 through 12 who consumed alcohol in the past 30 days in: 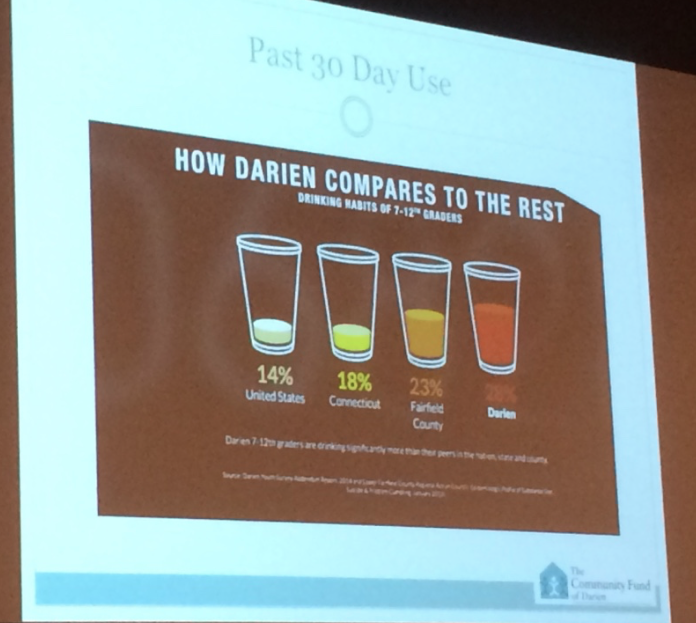 Adults Have a Problem, Too

“This comes from the Stamford Hospital needs assessment […] What we found is that one in four Darien residents are reported binge drinkers.

From a slide in Bernier’s presentation (not pictured in this article):

“In the Stamford Hospital needs assessment and the data that was [gathered] by the Data New Haven survey that the [state] Health Department commissioned, when Darien residents were asked ‘In the past 12 months, have you ever felt like you needed to cut down on your drinking or drug use?”

“Again — a striking difference in our community.”

Where Darien Doesn’t Want to Be No. 1

“When we look at [high school] juniors and seniors in Darien, in the past 30 days, 58 percent of our juniors and 67 percent of seniors said that they had consumed alcohol. 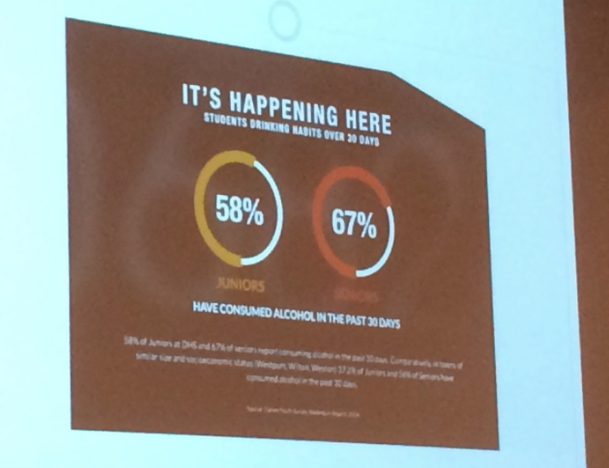 “What’s important here and not shown in the graph is when you compare this to our demographic reference group — which are Westport, Wilton and Weston, towns that are similar to us in size and demographics — you find that 37 percent of juniors had consumed alcohol and 56 percent of seniors. Again, a big jump in the Darien data compared to peer towns.”

From a slide in Bernier’s presentation (not shown in this article):

Bernier then showed comparisons of Darien surveys in 2011 and 2014 and the differences in percentages of youth who said they had consumed alcohol in the past 30 days: “Here in Darien, seventh through 12th graders overall was up 7 percent; juniors up 22 percent and seniors up 23 percent.” 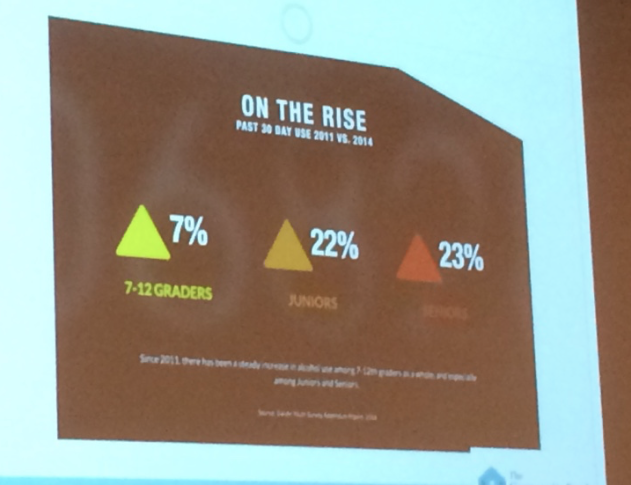 “So what are we doing about it?

“We have a task force that is [comprised of] 42 organizations and individuals in Darien who work with youth and who have expertise in working with youth, and in particular in therapeutic and substance abuse professions, and we came up with a strategic plan that involves many of these groups to blanket the whole town, to make sure that we can reach as many people as possible.

“We also have an active parenting class series that we were thrilled to partner with Darien Library and Family Centers [a private human services organization for children and families] with a trained facilitator from Family Centers. We did a four-part parenting series; if you missed that or know anybody who might be interested, we will be offering this again in the spring.

“We will also be looking at peer norms with a social marketing campaign targeted toward teens. That will come out on their Instagram and Facebook feeds, and a peer-to-peer prevention [campaign] with youths mentoring groups in the middle school and the high school.”

“Short-term outcomes from this strategic plan we’re hoping to gain:

“So that is the Thriving Youth Strategic Plan. It’s a five-year plan for Darien. We are thrilled to be engaging with this community, and we need the support of everyone.”

See the Presentation on Video

16 thoughts on “DRINKING IN DARIEN: Worse than Elsewhere for Both Teens and Adults — and the Problem is Growing”