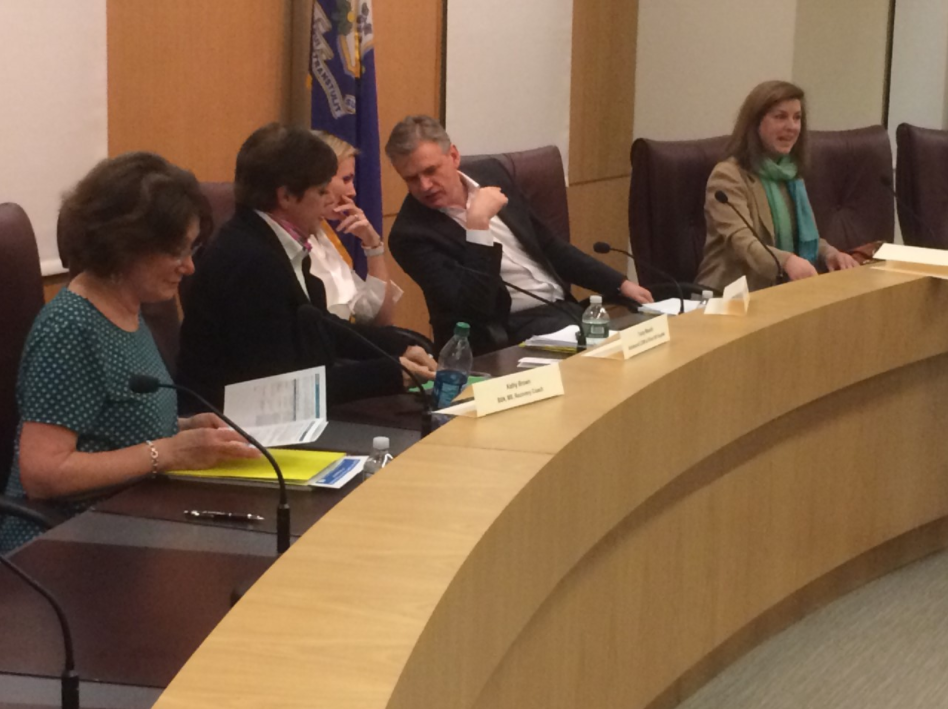 Panel members during a break in the meeting.

Parents can be respectful and show love to their children while they enforce rules; parents ask questions rather than make assumptions in a confrontation; and they can show sympathy while avoiding the temptation to fix problems that children are better off fixing themselves.

And parents should let emotionally healthy kids get experience in bouncing back from failures themselves — it builds resiliency, an important ability that the child will need later in life.

Those were some of the suggestions that a panel of experts gave in a recent public discussion, “Building Family Resilience in a World of Booze, Bongs and Benzos,” held in New Canaan. Three of the panelists live or live and work in Darien. 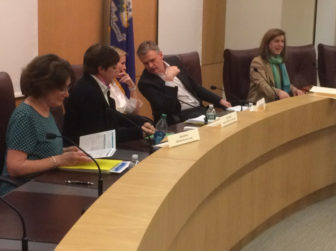 Panel members during a break in the meeting.

It was presented by the League of Women Voters of New Canaan and town Department of Human Services. Organizers said that a presentation held previously in Darien on resiliency in children inspired them to put together this panel discussion.

This article by David Gurliacci previously was published in NewCanaanite.com. Future articles in Darienite.com will discuss the speakers’ messages in more detail.

Kids and young adults who turn to substance abuse are often trying to self-medicate their way out of depressing or uncomfortable situations that, in many cases, they could react to if they had better resiliency skills, Carrie Bernier, moderator of the panel and director of the Community Fund of Darien.

“Research links five really key traits to resiliency and coping skills,” she said. Each of the four experts on the panel was there to discuss those traits. “The really good news is that it’s never too late or too young to build resiliency in your kids.”

The five traits or assets are

Dr. Frank Bartolomeo, director of behavioral health services at the Southfield Center in Darien, said self-esteem is a concept often “extremely misunderstood” and a “misconceived notion.”

“Healthy self esteem is not based on vacuous praise — it’s built on doing,” he said. “So the relationship people often assume, […] that if you have good self-esteem, that will lead to achievement. Actually, the opposite is true.” 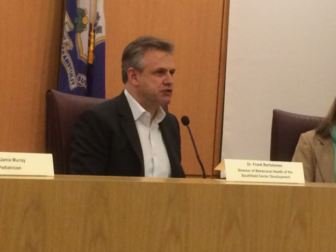 “Self esteem is built on doing — on esteemable acts.” It shouldn’t be based on comparing yourself to others, which leads to bitterness and envy when you inevitably find someone who does better on whatever yardstick you’re using (such as athletic ability or academic success).

Instead, self-esteem should be based on a person knowing she’s done her best or done a good job at something, no matter what others have done, Bartolomeo said. “You have to provide kids with opportunities to contribute ‘esteem-able’ actions that lead to self-esteem.”

Children need to learn an acceptance that life will also involve pain and suffering, and they have to have a willingness to tolerate that and, when they can, deal with whatever is creating those problems, Bartolomeo said.

“Peer pressure” is often not an overt urging by people that a teenager is with, he said. Instead, it can be a teenager realizing, for instance, that if the other members of a high-status peer group are abusing substances, the teen may be rejected by the group if he says he’s going to abstain.

“To be rejected by them — that’s going to require resiliency,” Bartolomeo said. 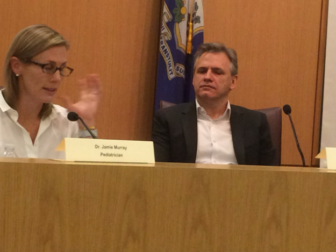 Dr. Jamie Murray, a former pediatrician who now works as a health-policy consultant, said positive adult role models have been shown to help children and teens in many areas, including higher academic performance and fewer high-risk behaviors. Bad adult role models can have the opposite effect, she said. Celebrity role models can sometimes be harmful, she added.

Parents are often strong role models for their children, even if the child doesn’t seem to be listening to them or watching them. “How you behave truly does have an impact on the risk for your child to engage in risky behaviors,” Murray said.

If you come home and say, “‘Oh my gosh, I’ve had a terrible day — I need a drink,’ needing a drink is a concern. If you need a drink, I would reflect on that. […] Do you truly need a drink?”

Tracey Masella, a clinical social worker at Silver Hill Hospital, said parents need to enforce rules that keep kids safe, but when kids are safe they should be allowed to fail and then pick themselves up again.

If young children are entirely left to play by themselves but when they get into a dispute can get a parent to intervene and come to the rescue, then the parent is rewarding the behavior that led to the dispute (because children like the attention) rather than rewarding good behavior.

Instead, she suggested staying for a few minutes with children when they’re playing, showing attention, and then leaving the children to play by themselves. If a dispute develops, don’t intervene immediately, instead, “let them see if they can figure it out — that’s how we teach kids that they can feel uncomfortable and Mom and Dad are not going to come in and rescue them.” 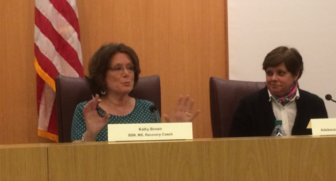 If parents set up rules, for instance, about a child’s bedroom needing to be clean by Friday if the child is going to be allowed to go out during the weekend, then what constitutes a clean room needs to be very clear, and when the regulation is violated (it’s an adolescent’s “job” to violate rules so the adolescent can see what he can get away with), then the rule needs to be enforced.

“It teaches them a valuable lesson: We all operate within a frame [of rules and regulations],” Masella said.

Kathy Brown, a substance abuse counselor who also works with families of those who have abused drugs or alcohol, spoke about effective communication, using a series of skits in which Masella participated (playing a mother) with two New Canaan High School actors, Maria Oliveira and Wyatt Lysenko (playing her children). 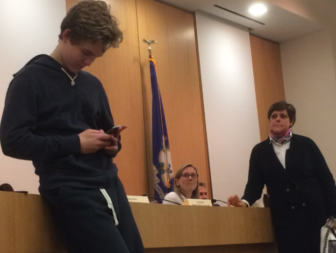 During this skit, Masella’s mother character asks Wyatt Lysenko’s son character to put down the phone because she wants to talk to him about a serious concern. She then questions him to get more information, always respectfully and while making sure he understands that she’s concerned about his behavior. The discussion itself wasn’t treated as part of the son’s punishment.

In three sets of skits, the first in each set showed the adult reacting wrongly — becoming over-emotional, not listening to the child, sometimes offering to make everything better through her own efforts, not the child’s; the second showed the adult skillfully drawing out the child to conclusions about what went wrong, how the child felt (and how the adult sympathized with that), and what should be done next (find a way to feel better while dealing with the problem constructively, sometimes by accepting punishment).

Toward the end of the meeting, the audience asked questions of panelists. One dealt with how boundaries can be set over time, as a child gets older and can be given more leeway.

Bartolomeo said: “Your boundaries should expand or potentially expand, based on your kid’s development, and their ability to show that they’re trustworthy […] when they’re putting what I call ‘deposits’ into the ‘trust account’ or ‘trust bank,’ you then can open up.

“Each time when they’re where they supposed to be and true to their word, that’s making a deposit. When they have sufficient accrual, then you’re in a position to negotiate expectations. Often what happens is adolescents have very little in the trust account, and sometimes they’re overdrawn, and they’re making demands for freedoms that they haven’t shown or demonstrated that they can handle.”

4 thoughts on “Experts Offer Parents Tips on Building Resiliency, Respecting Kids While Holding Them to Standards”