With only two days on the assignment as school resource officer at Darien High School, Officer Bryan Wallman said at a panel discussion Tuesday night that one of his first impressions is how competitive students are with their academics, and that it may be making them more stressful.

DHS Principal Ellen Dunn, who’s been working at the school for years and was also on the panel, said she’s been noticing how students seem more open and unembarrassed to talk with adults about drinking at parties and about marijuana. Don’t renovate that basement if you’ve got teenagers who might want to host a party, she advised parents.

Those were some of the observations from the panel at the “Truth and Consequences” public discussion about teenage drinking and binge drinking. 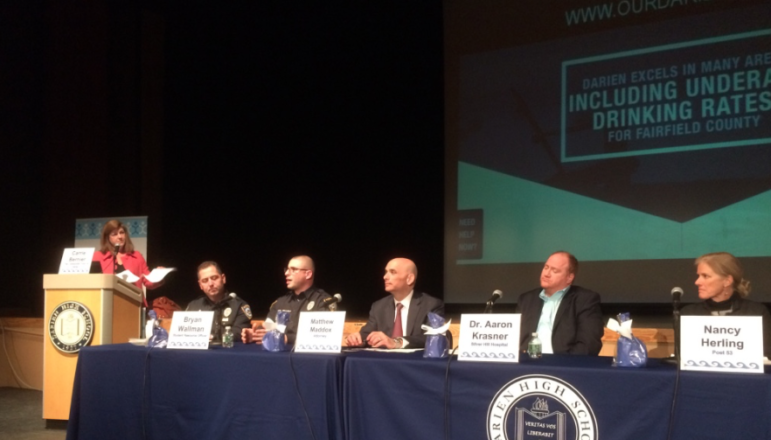 Most of the panel members, with Carrie Bernier, executive director of the Community Fund of Darien standing at left, at the podium.

Other panelists talked about what parents can do between the time they call an ambulance for an unconscious person found at or after a party, how they should think about legal risks if some teen gets injured at a party at their home where drinking is taking place, or how to approach communicating with a teenager.

[A video of the entire 94-minute event has been posted to the Darien High School website but we suggest the TV79 version, which is also posted (on Feb. 21) near the bottom of this article.]

The 90-minute public meeting, which attracted about 150 people to Darien High School Auditorium — the vast majority of them women and almost all of them adults — was sponsored by Darien High School Parents Association, Middlesex Parents Association and the Community Fund of Darien and its Thriving Youth Task Force, which is trying to get more information to parents and teenagers about teenage drinking, and binge drinking among both adults and teens.

Organizers say the goal is to reduce unsafe drinking eventually in Darien, where surveys have shown it’s higher than elsewhere, even higher than similar communities, like Westport, Wilton and Weston.

Teenagers driving after binge drinking have gotten into some horrific accidents — although not many in recent years in Darien, Detective Mark Cappelli said. 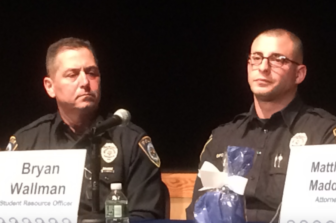 Some of the problems with teenage drinking parties aren’t always obvious: “It’s sometimes not just the alcohol,” he said. “It turns into sexual assault, sometimes.”

He said he’s investigated two cases in the past year in which young women came to police saying they were sexually assaulted in Darien after they’d become intoxicated.

In both cases, the women dropped the matter, deciding it was too difficult to go through. In at least one case, the victim seemed to not want to pursue the matter because she thought she wouldn’t be taken seriously, since she’d been drinking. 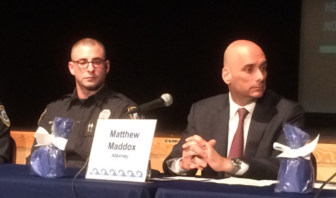 Attorney Matthew Maddox of New Canaan said he’s represented the family of a child who ran out of a teen drinking party and into the woods a few years ago when it was broken up by police.

The child “fell into a culvert and suffered an injury — a terrible, terrible injury — brain injury.”

He said that with attitudes becoming stricter against parents who are in a house when teenage drinking is going on at a party, it may not be sufficient to tell police (or, later, judges and juries) “I was up in our master bedroom, which is a quarter of a mile away, and I didn’t know, I couldn’t hear anything. That simply isn’t going to work any more.”

Aaron Krasner of Silver Hill Hospital said that parents need to both make it clear to their children that they will be very disappointed if their teens drink alcohol and keep lines of communication open so that the parents can become a better influence in advocating safe behavior.

“And it might not be what you want. in many cases it’s not. But I’m asking you to listen to them as people. […] To be able to listen to them as young peers will give you the ability to open up a dialogue that is potentially less judgmental, less bossy pants and more — more of a coming together.”

Teenagers go through a high degree of stress, Krasner said getting up very early, pressured into “functioning at a high level [in high school] to get into good schools and develop solid careers,” and they can be “horribly humiliated, especially if they’re different.” 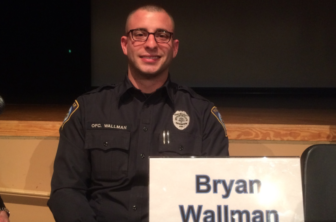 Wallman, the new student resource officer, said that one of his first impressions after two days at Darien High School was, “I’m really amazed by the competitiveness of the student body. It’s not necessarily something they talk about […] but everyone’s striving for college. Everyone’s working extremely hard. […] Everyone wants those good grades.”

At another point, he said, “I think it’s unique to these types of more affluent communities where the kids are pushing each other fairly hard, and you know, having some beers on the weekend really kind of takes the edge off of really hard school.”

Krasner said that talking about alcohol or substance abuse can be more difficult because parents may feel guilty about their own abuse of alcohol, taking of marijuana or other drugs.

It’s especially hard on teens with mental disorders, he said. “I don’t treat a single kid who has a mental disorder that hasn’t also experimented with drugs and alcohol.” It’s easier to pick up a joint, he said at another point, “than to work earnestly on tough family relationship.”

What To Do and Know Before the Ambulance Arrives

Nancy Herling became director of Darien EMS-Post 53 last year after many years as a volunteer.

Nancy Herling, who became director of Darien EMS-Post 53 last year after many years as a volunteer, has also raised kids in town and was very active in parent teacher organizations in the schools.

She gave a number of suggestions for what parents should do if they find a teenager unconscious. Here are most of them:

If, when the ambulance crew arrives and your child is standing there talking to you, you have the option of refusing to have the child taken to the hospital, Herling said. You don’t have that option for somebody else’s child, even if that child is in your home — the EMTs from the ambulance will make that decision.

Sometimes the EMT will put the parent on the phone to a doctor at the hospital if the parent doesn’t think the child should go there, she said.

Ellen Dunn: ‘The Lucky Ones Get Caught’

DHS Principal Ellen Dunn said that even when disciplining a student, up to and including severe discipline, the intention is to help the child. In the bigger picture, discipline a school delivers are “our responses […] that help our children learn to discipline themselves,” she said. 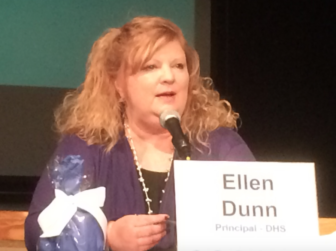 “I want you to understand that we are here out of love, and that is the motivation we have as a school.” In her experience, she said, “the lucky ones get caught,” because they have a better opportunity to change their behavior.

With increasing social tolerance of marijuana in society at large, Dunn said, “I believe the stigma that has been associated with the use of marijuana has slipped away.”

That’s even more true with alcohol, she said: “More students’ are comfortable now, and this is a big change […] talking about drinking at parties, especially older students, as if it is completely acceptable. That is one of the things that has surprised me.”

One piece of advice Dunn had for parents: “Slumber parties are for little kids — not for high school students.”

Also: “You need to keep your eyes on them. If you haven’t already done over your basement, don’t do it.” That got a laugh from the audience. “Unless you’re really ready to be vigilant. We need to work together to stop providing the place where bad decisions can be made.”

Editor’s note: Some information and pictures were added to the article between 6 and 8 a.m. Wednesday morning. The video from Darien TV79 was posted just above on Feb. 21.

A Handout From the Event 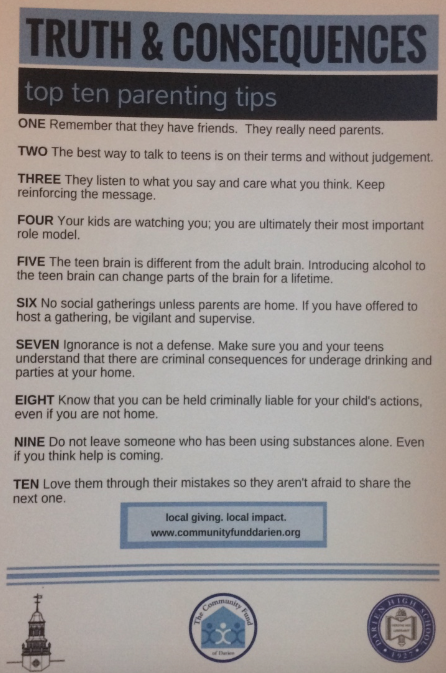 A handout at the Thriving Youth Task Force’s “Truth and Consequences” event Tuesday evening about teenage drinking in Darien.