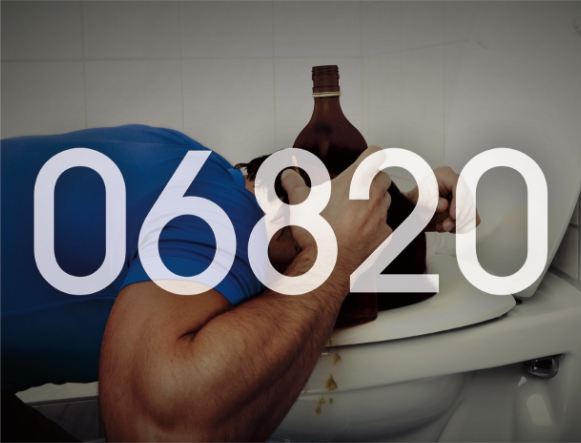 What does 06820 mean to you? In Darien we value education, celebrate our successes, and are compassionate in times of need. We look out for our neighbors. But there’s a critical way we’re falling short: 06820 is also a place with a troubling rate of teenage binge drinking.

This is an announcement from the Thriving Youth Task Force, led by the Community Fund of Darien. The editor’s note that was posted at this spot has been moved to the bottom of the article.

Since 2008, we’ve been tracking our town’s data on binge drinking — defined as four drinks in 2 hours for women, five drinks in two hours for men — and we’ve seen the problem intensify. In our most recent survey:

The way the kids are drinking in our town is not preparation for the adulthood we’d like them to have, physically, or emotionally. This month, we are launching a social marketing campaign to shine a spotlight on the issue, stimulate discussion, and to provide parents and teens with scientific, research-based facts related to the impact of binge drinking so they can make informed choices. 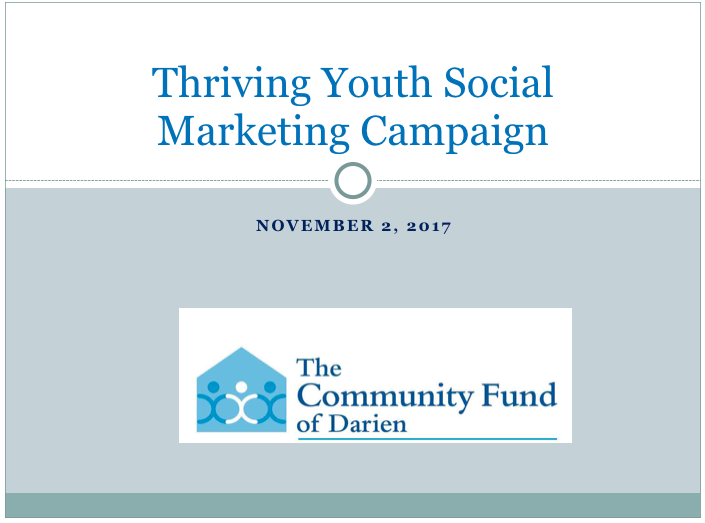 Darienite is republishing the entire slide presentation sent to it (eventually) by the Community Fund. Any seeming typos in it may be the result of the presentation being transmitted into Keynote, a PowerPoint-like program used by Darienite.com on an Apple system. We'd spend time trying to remove the typos, but we've already spent enough time trying to get the information, and we have other things to do. 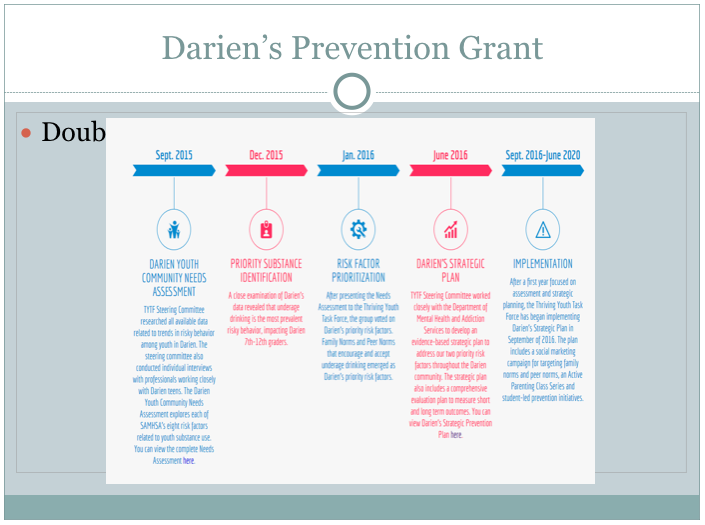 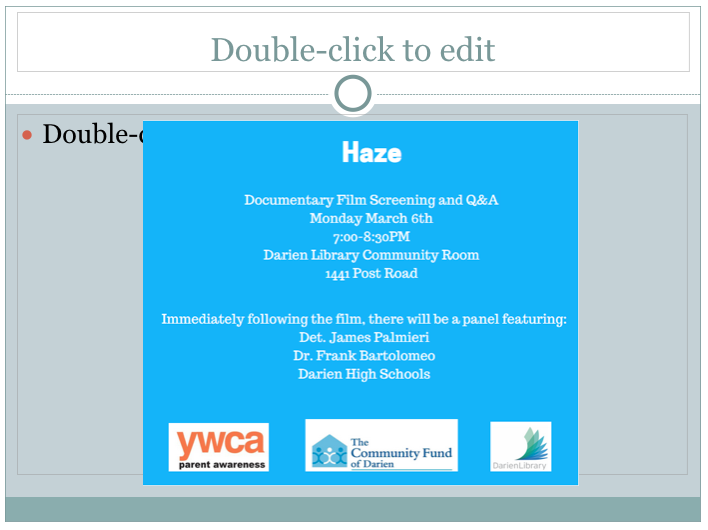 During the coming weeks, we will be disseminating [Editor’s note: To the Darien Times first?] disturbing images connecting binge drinking behaviors to research on the teen brain and the law. Some might find the images and information shocking, but shock in and of itself isn’t our end goal:

Our town campaign is designed to point a laser focus on the hard science of how detrimental teen alcohol abuse really is, and to offer proven tactics towards healthier attitudes and behaviors.

The latest scientific research on the teenage brain, and its vulnerability to neurological damage and addiction, is both riveting and terrifying.

In July 2015, Darien received a $500,000 grant from the state of Connecticut’s Department of Mental Health and Addiction Services to address underage drinking, Darien’s most prevalent substance abuse problem. 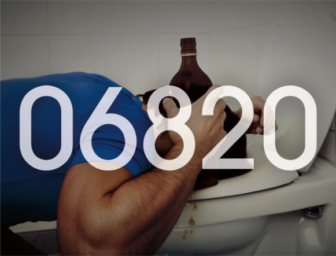 With leadership from The Community Fund of Darien, the Thriving Youth Task Force has developed a five-year strategic prevention plan designed to reduce binge drinking among teens in Darien.

In an effort to provide families with critical information, we have created a micro-website, www.OurDarien.com, with Darien-specific data and resources to begin this important conversation in town.

We will be tracking short and long-term outcomes related to parental knowledge of the effects of alcohol on the teenage brain, the social hosting laws, adult role-modeling of a healthy relationship with alcohol, and the importance of open communication regarding family rules for alcohol. 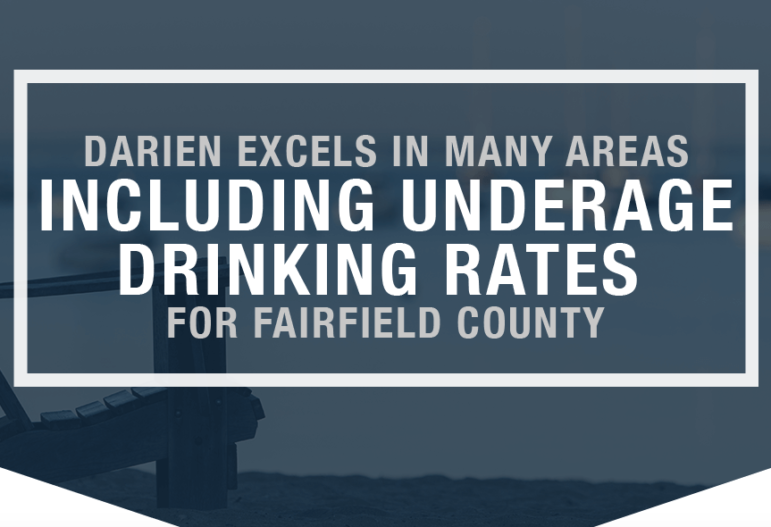 OurDarien.com is a beautiful, short, very informative "micro-website" useful for Darien teens, parents and even other adults who aren't parents. Here are some images from that website to give a taste of what it says and what it's about, but really — you should see it for yourself.

from the OurDarien.org microsite permalink 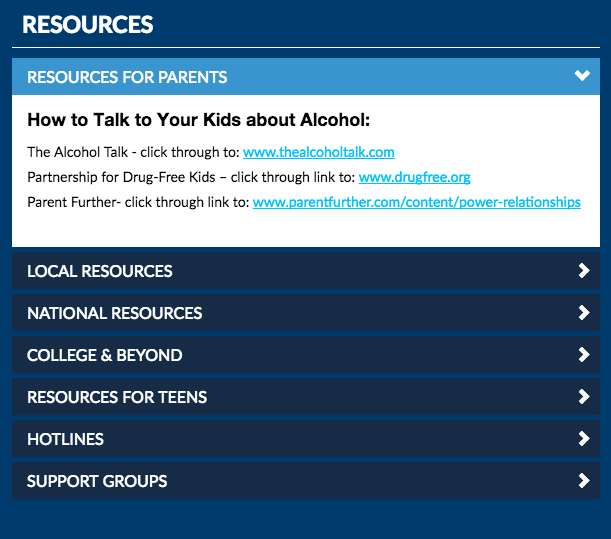 Of the campaign, Darien’s First Selectman Jayme Stevenson shared, “I support Darien’s Thriving Youth Task Force in its efforts to shine a spotlight on risky behaviors so parents, kids, our schools and community-at-large can begin to make healthy decision-making our highest priority and part of a new Darien culture.”

We hope you will join us in support of this campaign. We are committed to turning this trend around and giving parents and teens alike the information and resources to make an informed decision about underage drinking.

* The Community Fund of Darien

* The Center for Sexual Assault Crisis Counseling and Education

Editor’s note: This “news release,” dated Feb. 1, was sent to Darienite.com late in the day on Feb. 2 only after Darienite.com asked for it because it had already been printed in the Darien Times.

This favoritism with the Darien Times is standard operating procedure from the Community Fund of Darien, which often sends “news releases” to the Darien Times but not to us, and, we strongly suspect, not to any other news organization in town — and we somehow doubt that the Times editors don’t have to request that the “news release” be sent to them.

Carrie Bernier, executive director of the Community Fund for Darien (which should be renamed “The Community Fund for the Darien Times” — we’ll add that we have no complaint against the Darien Times for accepting largesse from the CFD: we would, too) was well aware of the interest by Darienite.com in the announcement, since we had discussed the matter with her and had emailed her requesting related information.

Could it be because they, too, have not received the news release? We’ve left a message at the Community Fund for the Darien Times for Carrie Bernier, asking her to explain why it seems news releases always go out so much later to Darienite.com and only after we’ve complained — more than once. After all, it isn’t hard to add an email address to a news release that’s already about to be emailed.

Usually, the purpose of a news release is to get information out to as much of the public as possible. The purpose of this news release is to help members of the community understand an important issue. But how important does the Community Fund really think this issue is if it’s playing games with distribution of the information? Do contributors to the Community Fund know that the organization is promoting one news company over other news companies?

This “news release” has two contact names at the top of it: Carrie Bernier and Darien Youth Director Alicia Silvers, a town official. We’ve talked to Alicia Silvers before about getting information out to news organizations at the same time, and she assured us she would. Why is this town official involved in an action that promotes one business over other businesses? We could make the same point about  the officials listed at the bottom of the announcement.

We understand that a person or organization may find it advantageous to give one news organization a tip or an exclusive story in order to ensure better coverage. That wasn’t necessary here with an important announcement, and therefore it was counterproductive in getting the word out. The Board of the Community Fund of Darien and those who contribute to it need to think about that, for the good of the organization and the town.