A Darien man who failed to stop for a stop sign, then drove over the double yellow line on Tokeneke Road at 2:28 a.m. on Sunday was found to have been drinking and was charged with driving while under the influence of alcohol, police said.

A police officer saw a gray 1998 Honda Accord leave the Interstate 95 Exit 12 ramp and turn right onto Tokeneke Road without stopping for the stop sign. The car crossed over the double yellow line, into the oncoming traffic lane, and the officer had the vehicle stop near the intersection of Tokeneke Road and Driftwood Lane.

The officer noticed the smell of alcohol on the breath of the 44-year-old driver. The man told the officer that all he had to drink that night was a single Heineken beer.

The man agreed to perform field sobriety tests, but didn’t perform to an acceptable standard. He was charged with driving while under the influence, failure to stop for a stop sign and not driving on the right side of the road. 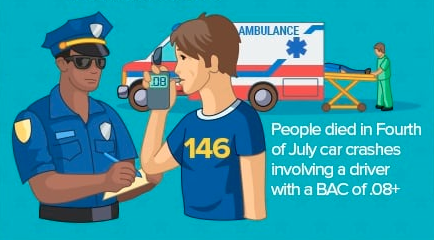 Deaths in DUI-related accidents in a recent Fourth of July holiday. In this incident, no death or even traffic accident occurred, nor do we know the BAC (blood-alcohol content) of the driver.

At Police Headquarters, the driver refused to take a breath test (which can result in harsher driving restrictions from the state Department of Motor Vehicles). He was released on a $50 cash bond and told he could not drive for 24 hours. He is scheduled to appear July 14 in state Superior Court in Stamford.

Darien police report that in the seven days ending Monday, July 2, a total of 11 accidents happened in town, none of which involved injury to people.

Police reported these other DUI arrests in April, May and June:

One thought on “Police: DUI for Darien Man After Traffic Violations on Tokeneke Road”