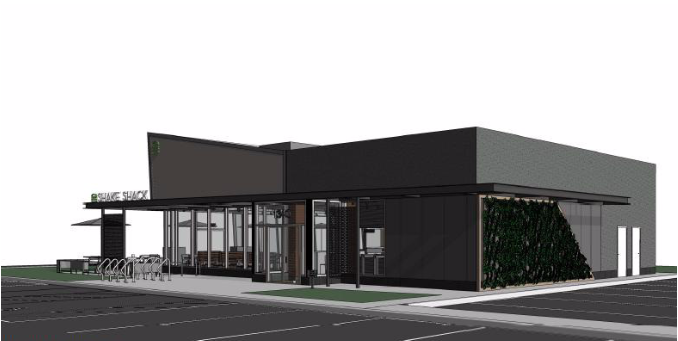 What Shake Shack in Darien would look like from the front.

Gary Greene, chairman of the Darien Zoning Board of Appeals, said he and the board didn’t feel they had a choice but deny Shake Shack a variance Wednesday night.

David Genovese, a developer working with Shake Shack to get a restaurant on his Post Road property, said Shake Shack officials didn’t feel they could make any more changes in their signage to get a variance. 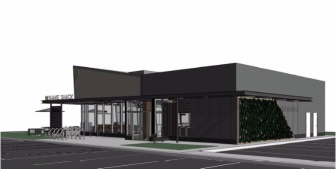 What Shake Shack in Darien would look like from the side.

The ZBA needed Shake Shack to make a case that its 24-inch-high name sign was necessary and its hamburger image was central to its branding, and that the way the sign was lit would not look too “glaring” with light coming from the side, said Robert Woodside, a code compliance officer in the Planning & Zoning Department who was at the meeting to assist the Board on Wednesday night.

The board offered to postpone its decision if Shake Shack would show them a live mock up of the sign or something similar to it so the board could see how it would look, but the company declined, Greene said.

Shake Shack had asked for about 10 variances of Darien zoning regulations, but those were the biggest sticking points at Wednesday’s meeting, according to Woodside.

A large Shake Shack sign at another location, with the burger image the chain uses.

The ZBA doesn’t make the zoning rules (that’s done by the Planning & Zoning Commission) but it is charged with following them, Greene said. (Woodside said that David Genovese, a principal in the company that owns the property, and his attorney, Robert Maslan, both said that when the P&Z Commission was asked to change the regulation on the height of the sign lettering, the commission wasn’t interested.)

Genovese said that when Planning & Zoning Commission members were asked about changing the rules about the size of signage, they said they recognized the current rules were outdated but that they didn’t have time to change them in the time frame Shake Shack wanted in order to get a restaurant built this year.

When Merrill Lynch wanted its bull logo larger than the lettering of its sign on 1020 Post Road building, the ZBA gave the logo a variance and the town’s zoning regulations were soon changed to reflect the idea that logos could be larger, Genovese said. He indicated that he thought a similar situation might occur with Shake Shack.

“We made the point [at the public hearing] that Shake Shack’s building design and signage is integral to the brand,” Genovese said. Later in the interview, he said, “I don’t think that the Zoning Board of Appeals was listening to what Shake Shack was saying about their brand and presentation.”

If a hardship case can be established — such as Stop & Shop being far from the roadway and therefore needing a bigger sign on the front of its store, then the ZBA can cite that as a justification for allowing a variance to zoning rules, Greene said. Otherwise, the ZBA will get request after request from other stores wanting the same or similar variances.

In a similar case, Chase Bank wanted its name and logo visible enough for drivers passing by at 20 mph to spot it and decide to make a turn into the driveway, and the ZBA granted a variance for that, Greene said. The same applies to a well-justified branding problem, Woodside said. He mentioned the Merrill Lynch logo — one that that is always bigger than the wording of the company’s name, as part of a careful branding campaign.

According to Greene, Shake Shack officials who came to the meeting didn’t have that kind of justification for the hamburger sign they wanted near the top of the building, and the company that designs and builds the type of sign desired — with lights coming out the side of the image — was something that Darien officials were unfamiliar with. They wanted to see the mock-up, Greene said.

Genovese said larger signs are appropriate and logical in areas of the Post Road where drivers are traveling faster and wouldn’t notice a sign with lettering only 10 inches high.

The town has allowed signs with lettering larger than 10 inches right in that neighborhood for Nielsen’s Florist and H&L Chevrolet, and a large Jaguar logo for the dealership immediately across the street from the proposed Shake Shack site, he said.

One of the points made by Planning & Zoning Department staff in the Shake Shack file for the ZBA application addressed Genovese’s point: “Just because a previous applicant on a different, much larger property has more or larger-than-regulation-allowed signage, how is that justification here?”

“It seems like they have a very flexible method to put their signs out,” Woodside said. In Westport, for instance, there wasn’t a hamburger sign outside the building, he said. Asked about that, Genovese said the signage for the Westport site went in before the hamburger became such an important symbol for the company, which is only about five years old and has been evolving its brand imaging.

Shake Shack had made significant changes to its application between the time it originally presented its ideas to the Planning & Zoning Commission late last year and when it appeared before the ZBA on Wednesday, Genovese said.

It removed the sign running around most of its stores listing some of the things it sold (such as burgers, fries, milkshakes), and at the request of the Architectural Review Board one of the hamburger images was removed. The company felt it had already made a lot of compromises, he said.

When ZBA members started suggesting signage smaller than 24 inches high, Genovese said, the company representatives thought that was a compromise they couldn’t make.

Jordan was asked if the company could come back with a proposal for a sign for the store name that wasn’t 24 inches high. She said signs needed to be at least 24 inches high, according to Woodside.

The board did close the hearing, then discussed the matter and voted 5-0 to deny the application. Board member Charles Deluca was absent from the meeting and was replaced with alternate member Richard Wood, Greene said. 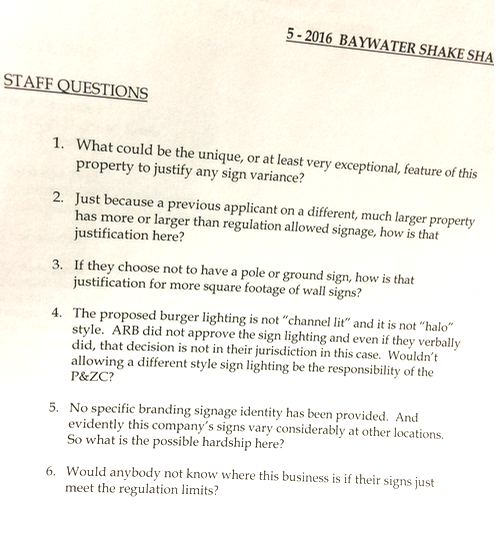 A list of points made by Planning & Zoning Dept. staff for the Zoning Board of Appeals.

Extending a public hearing is not unusual, and Shake Shack’s request for about 10 variances was more complicated than most, he said. “Applications that complicated are often done over two or three meetings,” he said.

Greene said the decision was in no way based on any dislike for Shake Shack, a popular brand among many in Darien. And Genovese, he said, “is a very well-known, well-respected developer — it had nothing to do with the developer.”

“I don’t think there was tension in the room,” Greene said. “We’re not adversarial, We’re not political. We’re just a group of volunteers who will grant variances where they’re permissible.”

“I wish that they would’ve been prepared to present more information in support of their application and be more flexible in their request,” he said. Genovese said the company had already been very flexible on many points.

Genovese said that Shake Shack had gotten to the point where they were ready to start constructing the building before pulling out. “They were ready to proceed as soon as they got the final approvals.”

Instead, he’s now looking at other possibilities for the site: Starbucks and Chic fil A had also expressed an interest in the location, he said. “I personally thought that Shake Shack was the best of these alternatives.”

11 thoughts on “Both Shake Shack Applicants, Zoning Board Say the Other Side Wasn’t Cooperative”