Shake Shack “walked away” after the Zoning Board of Appeals on Wednesday night denied the company’s request for larger signs at its proposed location on the Post Road, developer David Genovese said. 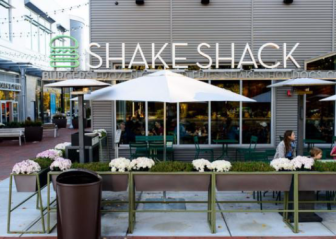 This Shake Shack shows the prominent sign and hamburger logo

“[T]he Zoning Board of Appeals denied our application tonight for Shake Shack’s signage program,” Genovese said in an email late Wednesday night, after the board meeting. Shake Shack was on the agenda for a public hearing to get a zoning variance for a Post Road site. Genovese is principal of Baywater Properties LLC and owner of the site through a related company.

“Shake Shack walked away,” Genovese continued. “I am in a state of shock.  Having worked on so many projects in Darien over the course of the last 15 years, I have never worked on anything which had such enormous community support.”

Company officials had said at Planning & Zoning Commission meetings that they use large lettering on the sides of their buildings as part of their branding. Some P&Z Commission members, including Commission Chairman Susan Cameron, had objected to that. 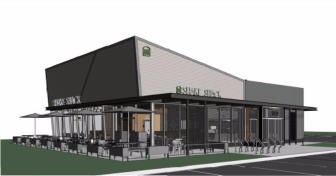 Other P&Z Commission members said the question of signage was best left to the Zoning Board of Appeals. The company later revised its plans, removing some signage that wrapped around the building, but it still wanted a zoning variance for a larger sign with the restaurant name.

The Zoning Board of Appeals meeting was not recorded Wednesday night by Darien TV79 or covered by Darienite.com.

Planning & Zoning Commission members and many town residents had been very supportive, even enthusiastic about the possibility that the restaurant would come to town. The high-end fast-food chain had proposed opening a Darien site at 1340 Post Road on property where Chuck’s Steak House previously stood.

Here’s the description of what Shake Shack wanted, from the Zoning Board of Appeals agenda for Wednesday night. The item was on the agenda for a public hearing, but the agenda stated that deliberations and votes might take place on any public hearing item. It’s unclear whether the ZBA voted on the matter or if a majority of members simply said they wouldn’t support the requested zoning variance: 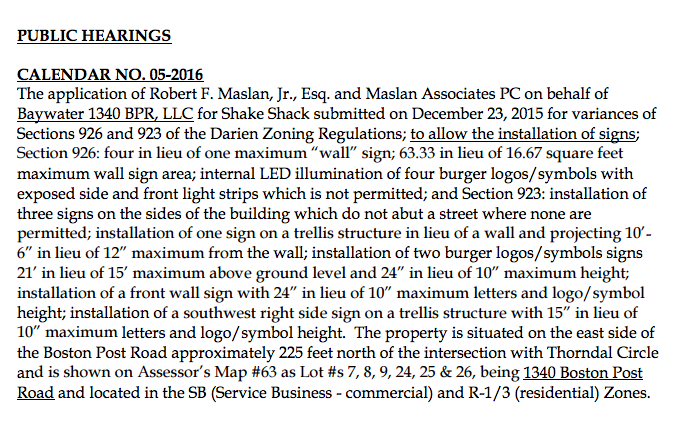