Shake Shack has walked away from their application to site a store at 1340 Post Road in Darien after deciding there was too much resistance from the Zoning Board of Appeals to their proposed 24-inch-high signs —but there may still be a possibility they’ll return.

Here are two signs of hope:

1. There’s a lot of interest in town

First, the restaurant’s bid to open a store in Darien is of huge interest in town. Take a look at the number of Facebook “recommends” for Darienite.com’s original article about the restaurant chain’s decision to withdraw it’s Darien bid: 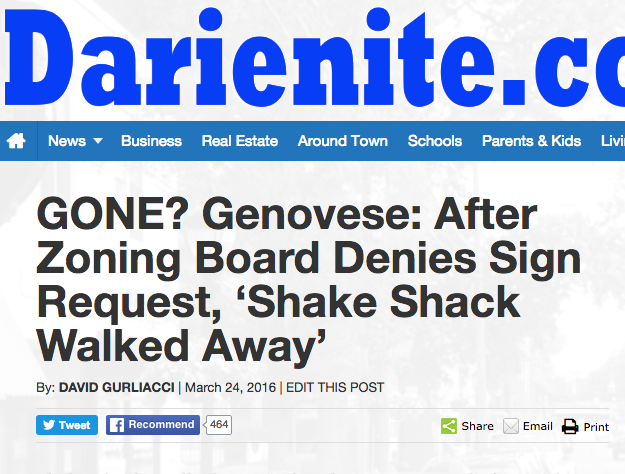 That 464 “recommends” is as large a number as any Darienite.com story has had. Darienite.com’s Web page for the article has garnered more than 2,800 unique visitors since it was published Thursday morning, and readers are still flocking to the story. (See the comments republished at the bottom of this article.)

Second, Planning & Zoning Commission member John Sini suggests that the restaurant could open soon and has a good chance of getting the sign size it says it needs later. He posted this comment on Darienite.com on Friday morning:

It’s an utter misrepresentation of the facts that “P&Z wasn’t interested in changing the regulations.” The November 3 tape reveals that we had a long discussion with the applicant over the complexity of the regulations and that it could be a 3-6 month process to change them in a comprehensive manner. Because of the tenant’s desired timeline, it was mutually agreed that the ZBA route might be the best tact to take. Based on the reports from the ZBA hearing, that didn’t render the desired outcome.

Ironically, P&Z is going to deliberate other aspects of the application on Tuesday. While I can’t prejudge the outcome, any rationale observer would assume that the two public hearings were favorable for the applicant and the tenant.

If the P&Z application ultimately passes, perhaps the tenant can deal with the smaller signage on a temporary basis and I will ensure P&Z addresses the regulation modification on a timely basis.

If the point of a sign is to alert people passing by that a business exists in that spot, that point already may have been made in news accounts that a lot of people have already seen.

If the Planning & Zoning Commission is as interested in having Shake Shack in Darien as people in town are interested in reading about the possibility, is it reasonable to assume the commission might fast-forward approval of sign regulations to get the restaurant back? 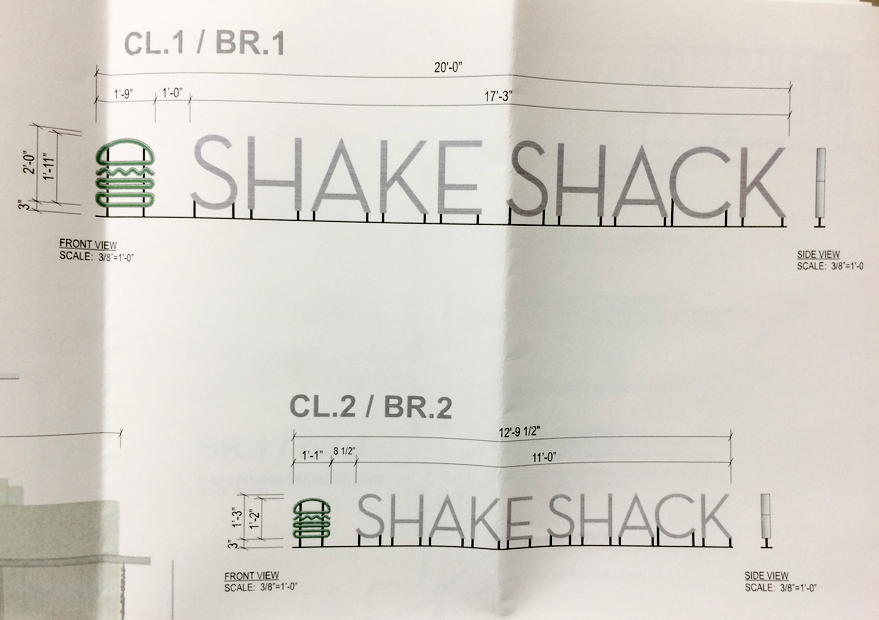 The designs for two of the signs Shake Shack was proposing (from the Planning & Zoning Department file).

Darienite.com has left a message for David Genovese, principal of Baywater Properties LLC, an affiliate of which owns the land at 1340 Post Road.

What people are saying

Here’s a sampling of some of the comments posted on Facebook, on Darienite.com  and on Twitter about the Shake Shack withdrawal. Most of the commenters are strongly supportive of Shake Shack, although a good number are opposed (names of commenters have been removed here, but you can follow the links):

Readers should be aware that the ZBA is limited to approving variances to the P&Z legal statutes for applicants who can demonstrate a hardship that comes with the property. Just wanting a sign that is larger, internally lighted or in greater quantities than the P&Z regulations specify is NOT within the discretion of the ZBA without a demonstrated hardship.

If a hardship is demonstrated, then the ZBA is authorized to iapprove a variance that relieves the hardship with the “minimum adjustment necessary”. If a variance for a larger than regulation sign is warranted because the legal size is too hard to be seen from the road because it is set far back from the road, then the variance will approve a sign that is large enough to be seen but no larger.

If the applicant was not able to demonstrate a hardship, then it is up to the P & Z to consider an application to change the zoning regulations. (LINK)

This is ridiculous. If Darien wants to attract quality businesses where locals and commuters actually want to eat (I seriously wonder how some of the places in town stay in business, they are so mediocre and random), the Zoning Board of Appeals need to welcome themselves to the 21st century. Our downtown pales in comparison to those in New Canaan, Westport and Greenwich. […] (LINK)

What broken system? They wanted it to be seen by people on 95 at 55mph! If you think Shake Shack cares in the slightest amount about Darien you are crazy. What hardship would they have had to present to ZBA? Exactly, not a single one. You think their model relies on serving a small suburban community? It doesn’t. I miss chuck’s […] (LINK)

From the “You know you are from DARIEN CT” group Facebook page:

3 thoughts on “Is There Still Hope for Shake Shack Coming to Darien? Maybe.”