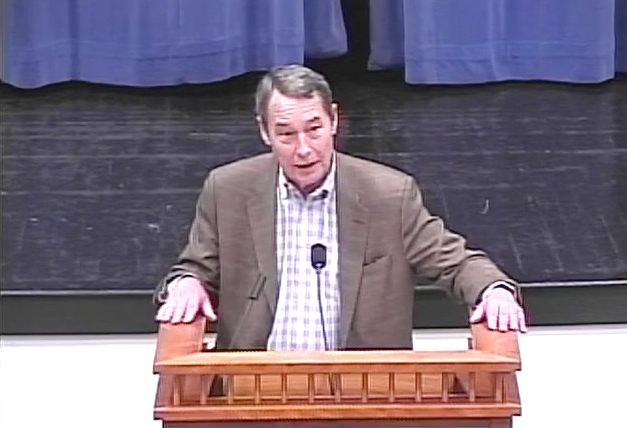 Bruce Ohr, speaking at the public hearing on checkout bag restrictions in Darien.

Bruce Orr, a former town official and a biologist with a career in the energy, chemicals, “and, yes, the recycling industry,” gave these remarks at the Feb. 6 public hearing on proposed town-wide restrictions on stores giving customers bags at checkout.

Darienite.com is publishing statements from the meeting and from written comments to three RTM committees considering the proposal. You can see a video of Orr’s comments at the bottom of this article.

Here are Orr’s comments, as delivered:

I’m a former RTM member, having served this body for over eight years, and I was a member of the Board of Finance for over five years. Six years ago, on Jan. 23, 2012, as a member of the RTM, I spoke in opposition to the then-proposed ban on retail plastic bags, which was put forth by a group, Choose to Reuse.

Bruce Orr, speaking at the public hearing on checkout bag restrictions in Darien.

While I supported the basic principles posed by the organization, namely the reuse and recycling, I could not support the ordinance. Today, I continue to be in opposition of the proposed ordinance, based on a number of well-researched facts.

For background and transparency, I’m a biologist, and I spent my entire career in the energy, chemicals, bio-renewables, and, yes, the recycling industry.

Contrary to what the previous speakers from SoundWaters [Olena Czebiniak — see her comments here] and the high school [Isabelle Hole’s comments] said, some fact-based points about the sources of plastic waste for the committees to consider. The U.S. EPA [Environmental Protection Agency] in 2014 reports in that plastic bag litter accounts for less than 0.5 percent of America’s waste stream.

None of Darien’s non-recyclable refuse, including plastic bags, goes into landfills. It all goes into the Wheelabrator Bridgeport waste-to-energy plant, generating 67 megawatts of energy, powering 67,000 homes in Fairfield County.

Over half of the land-based plastic bag waste leakage in our oceans comes from just five countries: China, Indonesia, Philippines, Vietnam and Thailand.

And 90 percent of the river-based plastics flowing into our oceans comes from only 10 rivers in Asia, South America [and] Africa. These rivers have two common traits: a generally high population in the surrounding area — in some cases, hundreds of millions of people — and the lack of waste-management systems in the infrastructure.

In summary, the macro-, overarching problems and challenges of plastic waste are not in Fairfield County or Darien but in the developing world economies.

Articles and comments about the checkout bag proposal:

And, lastly, as informed and educated citizens, we should make responsible, fact-based decisions regarding our local and global environment.

As Jim Cameron said once, Democracy is a great institution, and our elected volunteers here should be applauded for tackling important community issues, but they should not be legislating on what appears to be a symbolic gesture rather than substantive solutions to perceived environmental concerns.

Bring your reusable bags with you to the store, choose to reuse your paper and plastic bags, and recycle everything you can.

And lets work with constituents to promote infrastructure, education, engagement, and clean up plastic waste in the right places.

Correction: Due to a transcription error, the word “plastic” was incorrectly used instead of “paper” in this sentence, above: “While fully recyclable, the manufacture and distribution of paper bags has four times the carbon footprint of greenhouse gas emissions.”