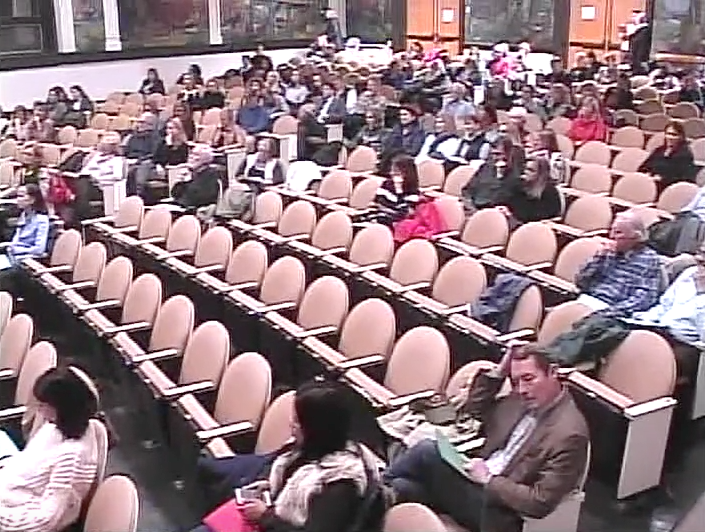 Not everybody who attended the RTM public hearing on checkout bag restrictions spoke. Some submitted written statements. Others who weren't at the meeting also submitted statements to the RTM.

Three organizations — based in Stamford, Norwalk and North Haven — submitted these written comments to the Darien Representative Town Meeting in support of a proposed town ban on plastic bags not meant for re-use:

Skip the Plastic Norwalk, a group raising awareness about the impact of single-use plastics on our environment, strongly supports Darien’s proposed ordinance banning plastic checkout bags, and urges Darien to join the growing number of towns and cities across the globe, including Norwalk, in banning plastic shopping bags.

The ordinance was passed unanimously by Norwalk’s Common Council following remarks from a packed room full of supporters: residents, students, business owners, representatives from the Maritime Aquarium, environmentalists and residents of other towns that already have a ban in place. Every single speaker was in favor of the ordinance.

Why a ban? The numbers tell the story:

—According to the EPA, when it rains, storm sewers and drainage outflows transport
litter to rivers which eventually carry the plastic into waterways such as Long Island
Sound.

—More than 100,000 plastic bags end up in the Long Island Sound each year, either
directly or through storm sewers and drainage outflows. Additionally, some of these
plastic bags clog storm drains, causing water to back up on to the streets.

—Plastic doesn’t break down completely; instead it photo-degrades into microplastics, which absorb toxins and continue to pollute the environment. Plastic takes hundreds of years to photo-degrade.

—In bodies of water including the Long Island Sound, microplastics are ingested by
marine life including fish. According to Scientific American, these toxic microplastics
are entering our food chain. A recent study found that 90% of table salt contains
microplastics.

—Plastic bags are used for an average of 12 minutes.

—Only 1 percent of bags are returned to drop-off locations that do accept plastic bags for recycling.

With foreign markets no longer accepting as much plastic from other countries, the
impact is twofold:

1. Municipalities will have to pay more to have recyclables carted away,
whereas before recyclables were a source of revenue.

2. Finding buyers for plastic bags that are returned to proper retail outlets is
getting increasingly difficult.

My name is Patricia Taylor. I am director of the Plastics Project for Environment and
Human Health, Inc.

EHHI is a 10-member, nonprofit, science-based organization composed of physicians, public health professionals and policy experts. The organization is dedicated to protecting human health from environmental harms through research, education and the promotion of sound public policies.

EHHI is not a membership organization and all our support comes from foundations and committed individuals. We not receive any funds from businesses or corporations.

You are among 16 Connecticut communities that are currently considering similar measures to prohibit single-use plastic bags. I have provided you with a list of those other towns and cities, along with summaries of four existing ordinances and a copy of the most recent ordinance passed. Five communities have already passed bans — Westport, Greenwich, Stamford, Weston and Norwalk.

On a national level, almost 80 percent of the plastic we produce will end up in our
oceans, landscapes and landfills. Here in Connecticut, because we don’t landfill
garbage, most of our plastic will end up incinerated or it will litter our landscape, then travel down streams and rivers into the Sound, and from there into the Atlantic Ocean.

Plastic pollution is forecast to outweigh all the fish in the sea by 2050.
EHHI is working to reduce the use of plastic because of a growing body of scientific
research that shows the impact on human health from chemicals in plastic.

Two groups of chemicals, phthalates and bisphenols, are of special concern. These chemicals are used to respectively soften or harden plastic.

We may be exposed to them from eating seafood that has itself eaten plastic, from food or water that has been packaged or microwaved in plastic containers, from table salt, from detergents and cosmetics, from municipal water sources, and even from the air.

These chemicals have been found in human stool samples collected all over the globe. Both groups of chemicals, some at very low doses, cause health problems including endocrine disruption, diabetes, cancer, obesity, ADHD and heart problems. As with other chemicals, they may present an increased risk to infants and children.

Single-use plastic bags have only been in use in the United States since 1982. Each
bag is only used for an average of at most 15 minutes, then it becomes solid waste.

Few plastic bags, called film by the recycling industry, are recycled. In fact, they cause
huge problems at recycling plants, when they get tangled in sorting machinery and must be removed manually.

Each time you choose to use a reusable bag rather than a single-use plastic bag, you
make a significant positive contribution to your community’s well-being. It has been
shown that ordinances like the one you consider at this hearing, that ban single-use
plastic bags and impose a fee on paper bags, serve to educate the community, reduce
the use of plastic and provide support to retailers who must implement the change-over from plastic to reusable bags.

Darien can do something positive with this ordinance. Prohibiting single-use plastic
bags is a great step to improve your quality of life and environmental and human health – not just here in Darien now, but for future residents of the city and state.

EHHI strongly supports your ordinance to ban these plastic bags and to charge a 10¢
fee for paper bags, with the fee to remain with store owners.
Thank you for your attention.

Our mission at Surfrider is to protect our oceans, waves and beaches. We have found that one of the easiest and most effective ways of protecting our environment and reducing our consumption of petroleum based plastics is to help change the consumer paradigm; that is to say, eliminate plastic bags at checkout, put a fee on paper bags (which is NOT a tax, but a pass through fee kept by the retailer) and have the shoppers bring their own reusable, machine washable bag.

Sometimes we hear from officials that plastic isn’t a local problem, however our Surfrider volunteers know that not to be the case.

In the last year two years, we’ve held three beach cleanups in Darien alone and have removed well over 400 pounds of plastic and marine debris from Weed Beach, Norton River/Holly Pond and Pear Tree Point. We have learned that we cannot clean our way out of this mess.

Westport, Greenwich, Stamford and Norwalk have all passed bans on single-use plastic bags and the ordinances are becoming stronger with each iteration. BYODarien (a wonderful local, grassroots group) has spearheaded the effort to make Darien a cleaner, healthier and more educated place and we’d both be happy to meet with you to discuss possible next steps.

Thank you for the consideration!