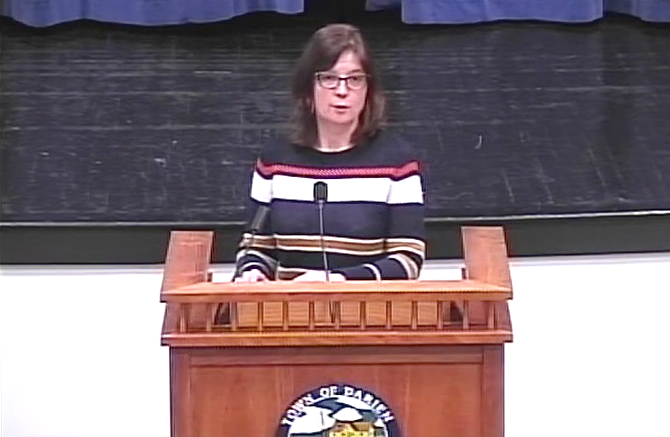 Darienite will be publishing statements from more than two dozen of Darien residents and others about the new proposal to forbid local stores from providing some disposable plastic bags at checkout and provide reusable bags instead.

Here are two statements given at a recent public hearing held Feb. 6. Darienite will be publishing other statements from the meeting (slightly changed, mostly for style purposes or speaking mistakes). 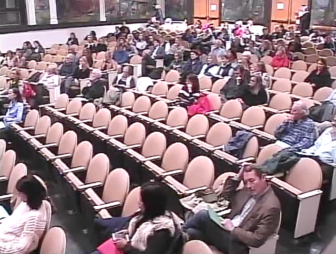 About 140 people attended the public hearing on the proposed checkout bag ordinance. The 90-minute meeting was held Feb. 6 in the Town Hall Auditorium.

Comments submitted in writing and posted on the town government website will also be published in upcoming days. This series will continue, often more than once a day, through the end of the month.

The statements at the public hearing were mostly in favor of the ordinance. Speakers were told to keep their comments under three minutes.

Comments from supporters Lucia Zachowski of Goodwives River Road and Olena Czebiniak of Cherry Street are included here. A written statement from Darien Chamber of Commerce Director Susan Cator, who also spoke at the hearing, will also be published today, Monday, Feb. 18.

We are the only town in this area that does not have a plastic bag ordinance. [She said a little later that New Canaan has one under consideration.]

I joined BYO Darien back in May when I discovered on the DEEP [Connecticut Department of Energy and Environmental Protection] website that all those plastic bags I was religiously putting into single stream [recycling] are, in fact, getting pulled out of the single stream recycling […], and they are being burned in Bridgeport — and we are breathing those fumes as they are coming down the coast. 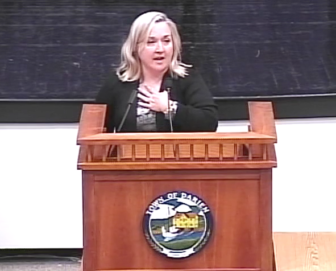 Image from Darien TV79 video of the public hearing

Lucia Zachowski, speaking at the public hearing on the proposed checkout bag ordinance.

I was horrified because I have seen, as I’m sure you all have, that the number of plastic bags that are given out every day. Well, it’s worse than you think.

Every week in Darien, between the two Stop & Shops and the CVS, close to 60,000 plastic bags are given out. We’ve gotten that number from the managers — 60,000 a week.

But it’s also an underpinning of our home values here. So there are three really good reasons for everyone to get behind this ordinance.

The ordinance we’re proposing is, over a six-month period, to ban out the plastic bags that retail establishments might already have in stock, and then, after that six-month period, we would go to a 40 percent-recycled paper bag offered for an environmental fee of 10 cents, which would defray the cost of the paper bag to the retailer.

I have a vendor right here who will provide those recycled paper bags for 14 cents apiece, so the retailers would still have a cost of 4 cents per bag. […]

We are looking for input from the town because it’s very important that we have a dialog that [lets] people feel like they’ve been heard, so I encourage you to speak up tonight or send an email to the RTM [Representative Town Meeting].

[Anyone who wants to give comments to the RTM or has questions is encouraged to email DarienRTM@DarienCT.gov. Opinions on the proposal will be posted on the town government website.]

There is plenty of precedent for such an ordinance. As I said, the towns surrounding us all have ordinances or are considering ordinances — [a town government body in] New Canaan is meeting tonight.

So It is something that we all need to consider, not just for the moment, but for the future. I personally have been very involved with the restoration of Gorham’s Pond, and when we clean out Gorham’s Pond twice a year, the dominant items that come out are plastic bottles and these plastic bags.

If plastic bags had been on the Mayflower, they would still be here. They take over 500 years to degrade. Is this the kind of world we want to leave to our children, where we’re knee-deep in plastic bags and plastic bottles and wrappers?

[In addition to living on Cherry Street in Darien] I also work for SoundWaters environmental education organization right here on Holly Pond, and I would like to just bring up two points, very quickly about our work with the young generation. 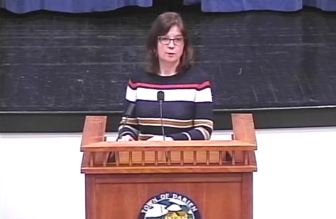 We take our students to the beach right after runoffs — right after the storms and big rains — and we look at the shoreline and see […] what all these storms are bringing to the beaches. They full of plastic. We pick up pounds and pounds of plastic bags – single-use are the biggest culprit.

When our students are going into the middle of Long Island Sound in our research vessels and they test the waters in Holly Pond […] They test on the beaches, they look at the animals and also test their composition — and they find micro-plastics in every one of these items.

Inevitably, they’re looking at us as their teachers and asking a question: What do we do about this?

It’s just like we were composting, and I give a lot of credit to our town for that. We should be at the forefront […] and teach our generation how to preserve and protect what we have for the future and for now.

4 thoughts on “Opinions on the Proposed Checkout Bag Ordinance: First in a Series”