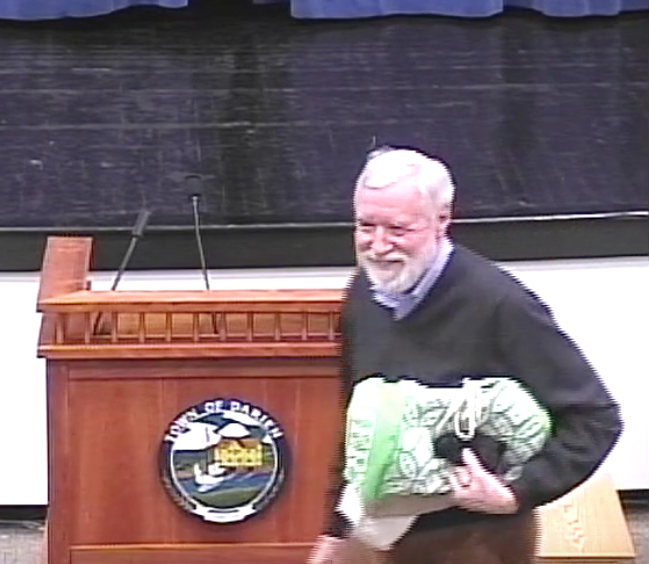 Cliff van Voorhees showed some of the reusable plastic bags he's been using to shop with in town. He says they're just as convenient as the disposable bags.

About 140 people attended a recent public hearing on a town proposal to restrict the use of checkout bags in Darien. Here’s what two of the roughly two dozen speakers said.

Darienite.com is publishing statements from the meeting and from written comments to three RTM committees considering the proposal. You can see a video of the comments at the bottom of this article.

I see this in the context of the ways, the many ways, that we are destroying our planet, and for me it’s a moral imperative that we do whatever we can to stop environmental degradation. This is a good, but small step in that direction, if you ask me. 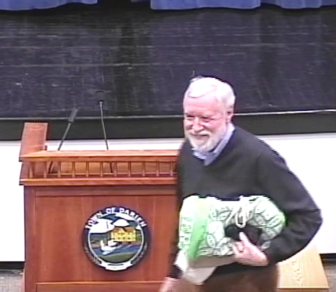 Cliff van Voorhees showed some of the reusable plastic bags he’s been using to shop with in town. He says they’re just as convenient as the disposable bags.

They’re thought to be convenient, which they are, and cheap. Well, there are other ways we can carry our things home that are equally convenient.

And “cheap” isn’t really accurate, because the cost never seems to include the environmental degradation that comes from producing them and disposing of them.

When not properly disposed of — you’ve already heard some of the consequences, so I’ll skip over that — but I will say that I see them in trees, in bushes, going down storm drains. It’s really an eyesore, as well.

On my way down Ledge Road to the Transfer Station yesterday, I counted 10 bags on the roadside. And guess what: We pay to have those picked up and disposed of.

Last year, I had the opportunity to tour the City Carting recycling center, where they take the single-stream stuff. They put it through some very expensive equipment and try to sort it out. And I saw how difficult it was for them to try to deal with these plastic bags.

Articles and comments about the checkout bag proposal:

So I decided that I would stop putting them in the single stream, and I would collect them. I tried to squeeze them down and put one bag in another and another and another, and before I knew it — just my wife and I, because we’re now empty nesters — we had a bag that was three feet tall and three feet in diameter in only four months.

So I think that enough is enough. That we don’t need these, that we can get rid of them. There are better ways to do this.

Much of Europe, the states of California and Hawaii, many cities like New York and Chicago, the towns of Westport and Greenwich are way ahead of us.

If my time permits, I’m going to show you a couple of bags that I like.

We do not need plastic bags and we should not want plastic bags because of the terrible costs to our environment.

So without hesitation I endorse, enthusiastically, any measure that will reduce the use of plastic bags.

So let me just show you a couple here. Here are three [“Two seconds,” the moderator interjected]: Palmers, and in the pockets, my wife carries these all over. [He took a bag out of his pocket that stuffs into a small space.]

I am a senior at Darien High School; I’m on the board of the Darien High School Eco-Citizens Club; I am an intern at SoundWaters, which was just mentioned; and I’m doing an environmental research project this year with the University of Connecticut that will be presented in a couple of months; and my data will hopefully be used to help protect Gorham’s Pond. 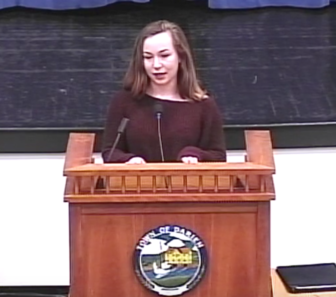 I just want to start out by saying I fully support the ordinance, and I think it is something that needed to happen yesterday.

Environmental crisis is just that in our say and age — it’s a crisis. I think the fact that action hasn’t been taken already is a huge issue, and like was mentioned, actually it starts on a local level, so this is a great change.

But it shouldn’t be viewed as something small: It should be viewed as the bridge to something that’s going to be bigger. If all the local movements start out, then actual change will happen.

And the crisis is coming in fast. Within my generation, in just my lifetime, huge detrimental environmental effects could occur. I don’t want that to happen. I don’t want my kids to live in a place where the whole world is polluted.

I’m just going to read off some stats that helped motivate me to support this ordinance:

— 32 percent of plastic packaging each year goes directly into the oceans. We live on the ocean. That’s a huge issue.

—At the current rate, there’s going to be more plastic than fish in the ocean by 2050. That’s going to affect us directly.

Another huge issue with plastic bags, not just by wasting them and by them not being recycled, is that when plastic bags go to landfills and they sit there, a liquid form of toxic materials forms up in the landfills and that goes directly into the ocean.

It’s directly polluting Long Island Sound right now. My kids won’t be able to swim in Long Island Sound at the current rate that it’s happening, and, like has been mentioned, we want to appreciate the beauty of the place that we live in and be able to enjoy it, so we need to take significant action.

Like has been mentioned, Europe has banned all single-use plastics, which will go into effect in 2021, and across Europe they’ve been charging small amounts, like 10, 15 cents per bag, and that is something that could be used in our town specifically.

It would also promote cashiers to expect reusable bags instead of immediately offering single-use ones.

I just hope that our town can pass this so that we can make a small change to help our community in the greater issue of environmental change.