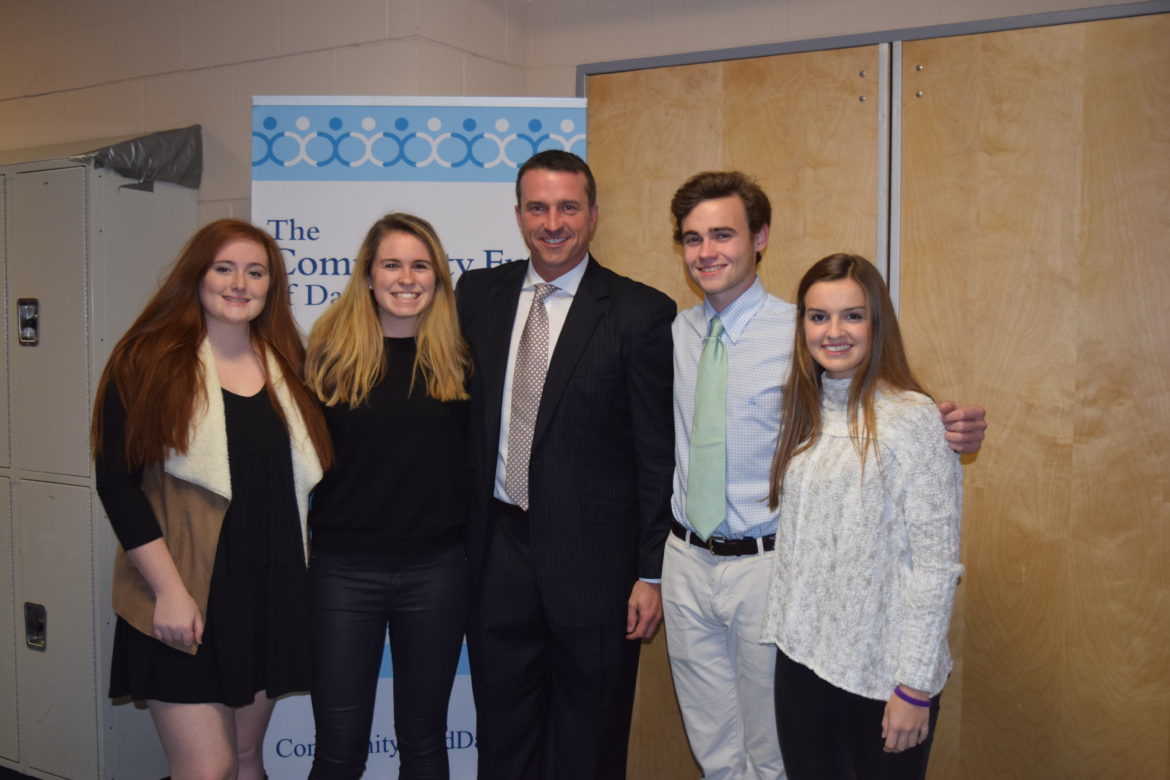 “Every student I have talked to went home after school and told his or her parents how amazing the experience was, or discussed in class the general feeling of awe following the presentation.”

On Thursday Nov. 30, I was one of nearly 1,400 Darien High School students who filed into the auditorium expecting to hear the same drug and alcohol lecture we have heard repeatedly from parents, teachers, coaches, and previous presenters.

Students awaited the usual litany of intimidating data on brain development and the statistics on alcohol-related car crashes that had been displayed on screens numerous times before.

Ninety minutes later, nearly 1,400 students filed out of the auditorium profoundly and unforgettably moved by the honest and often heart-wrenching words that former NBA star and recovered addict Chris Herren came to share with our community. Aside from two presentations to the student body, Herren also spoke that evening to an audience largely composed of Darien parents. 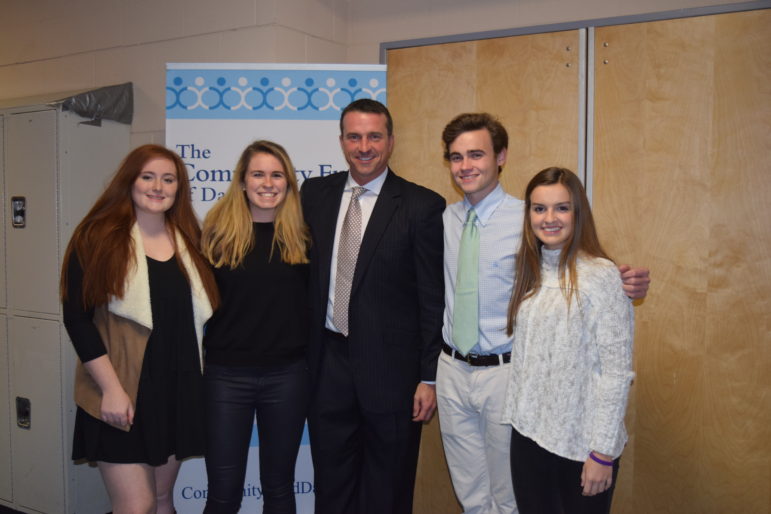 For the days leading up to Chris Herren’s visit, talk of the event around school consisted mainly of the shortened class times and his prior profession as an NBA player. The general feeling was one of low excitement and little anticipation. A boy in my math class had even said, “I made sure my phone was charged before the assembly because I was expecting a boring presentation, but I did not even end up looking at my phone.”

Chris Herren delivered a captivating, honest, and inclusive presentation that encouraged every individual, teacher or student, freshman or senior, athlete or actor, to reflect on his or her choices.

To gain some perspective on Herren’s story, a segment of Unguarded, a documentary on Herren’s life, was shown before Herren spoke. The video included Herren’s beginning in Fall River, Mass., a town centered around basketball, and followed his underlying, hidden addiction through his short career at Boston College, then to Fresno State, to the Denver Nuggets, and finally with the Boston Celtics.

Certainly, the basketball highlights served as an enticement to a student body that prides itself on athletic success. Yet, after watching this short Emmy-nominated documentary about a former NBA basketball player, the most surreal part was watching Chris Herren walk out from the side of the stage.

He walked along the front row, fist bumping and shaking hands with students, and then took his place only several feet in front of the first row of seats. Rather than standing at the podium up on stage, he stood right in front of the students. He was there with us and, for perhaps the first time in my experience as a high school student, we were all there with him.

In an auditorium filled with students, Herren articulated his hope that today he could help one single person. Herren began not by continuing the description of his life that had been told by the video but by telling the story of a girl, the same age as many of the kids in the auditorium.

Seven years ago, Chris Herren walked into an auditorium, just like the one in which we were sitting, to tell his story for the first time. At the end of his talk, when Herren opened up the presentation for questions from his audience, a girl at the top of the bleachers raised her hand, but after being teased and laughed at by the kids around her, she put her hand down and insisted she did not have anything to ask. That same girl emailed Chris Herren two months later and, this time, told him her story.

She had a father who was an alcoholic and a mother who was depressed. The girl told him about the cuts that lined her arms, legs, and ribs. She told him about how hard it was to be “ugly” in high school, to not wear the same clothes as everyone else, to be laughed at by the kids around her. Herren told us that he still emails that girl every month to make sure she is doing well.

What Herren made clear to us with that young girl’s story was that his presentation was going to be much more than simply his story of drug addiction and recovery; it was our story about the choices we make and self-worth.

He told the story of Marcus, a boy who had hugged him at a school he visited, who then shot himself a month before Herren returned to speak two years later. He shared the story of an eighth grade boy who died after swallowing unknown pills in an attempt to be like his older brother and sister. He told us about boy who had killed himself in his backyard and a kid who had laid down on his couch drunk and never woke up in the morning.

In these stories of heartbreak and struggle, Herren could have been talking about a kid from our own high school. Through his accounts of kids our age, kids who share the same struggles, ambitions and dreams, Chris Herren gave a name and a story to problems that had been previously been dismissed with a simple “but that will never be me.”

Throughout the entire talk, Herren used his own story as a reference and a warning. His experiences throughout high school could have been interchangeable with the experiences of many of the students sitting in the audience.

DHS junior Lauren Sulger said that “His talk was eye opening and encouraged every student to give second thought to their choices,” whether that means on a Friday night walking down the stairs into a basement or in the school hallways.

The most valuable part of Herren’s talk came after he had talked about the kids he had met and his own high school experience. At this point, Herren turned to us and asked students to consider whether or not they can confidently say that they are proud of who they are.

Herren’s questions for those in the audience were unsettling and thought-provoking because he asked questions that many have not been asked before:

Why? Why do you feel the need to get drunk with kids you have known since kindergarten? If you would not want your younger sibling or cousin or anyone who looks up to you to make the same decisions, then why is it good enough for you? And, can you look at yourself after lying to a parent and say I like who I am?

Chris Herren gave every single audience member a place in a story about overcoming adversity. Whether one had a friend, a relative, a sibling, a parent, or no one at all struggling with addiction, his message of openness and acceptance applies. He went beyond any chart or graph, any statistic; he made every person in the audience feel as though he or she has a place in this story about believing in yourself and having the courage to do that.

Like so many others, I found myself in a daze for the last period of the day, unable to divert my thoughts from his words. Every student I have talked to went home after school and told his or her parents how amazing the experience was, or discussed in class the general feeling of awe following the presentation.

DHS Junior Marley Garfield recalled, “The entire audience was mesmerized and utterly silent, which differed from past presentations during which students were relatively disengaged.”

Chris Herren’s talk is a call for the establishment of a permanent reminder in our town, and especially our high school, that every person has worth and that no story should have to end in tragedy. He asked us to look beyond the labels on clothing or the appearance of someone’s face and to consider the possibility that a person’s struggles are not often visible from the outside.

Nothing changes overnight and teenagers will not suddenly be different, but I am certain that Chris Herren’s words impacted far more that a single person sitting in the audience that day.

As Chris Herren will openly admit, his legacy will not be as a legendary NBA player but instead as a recovered addict who now offers young people a chance to see their world a little differently, to perhaps make different choices, and to remember that the decisions we make need to come from a belief in ourselves rather than a desire to fit in or seem better than we are.

What I realize now is not simply how powerful Herren’s message was but how ready we all were to hear it.