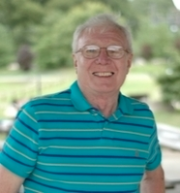 Raymond Votier, 82, passed away on Dec. 6. A date for his funeral will be set later.

Raymond (Ray) Votier, 83, of Stamford passed away on Dec. 6, 2017 after a courageous battle with mesothelioma.

Raymond Votier, 83, passed away on Dec. 6. A date for his funeral will be set later.

He was born on Nov. 27, 1934 in London and was the son of the late Agnes Mary Votier (nee Donovan) and William Ernest Votier. He was predeceased by his brother Brian Votier of London.

Ray apprenticed as a pipe fitter and turner in England before earning a National Engineering Certificate in mechanical engineering. He moved his family from England to the United States in 1968 to pursue his career.

He initially worked as a piping designer for Crawford and Russell in Stamford and later at many other engineering companies. In 1982, he bought a PIP printing franchise in Norwalk and operated the business until his retirement.

— This obituary previously was published in the Stamford Advocate

Ray was a long time member of the Freemasons and was a double past master of Ivanhoe Lodge No. 107 in Darien.

He is survived by his former wife Christine Ann Votier (nee Meleady), who remained very close to him; his three children: Sean Votier, Elaine Votier Biersack (along with her husband, Joseph Biersack) and Brian Votier. He had five grandchildren: Colin Votier, Devon McNerney, Lauren Votier, Heather Votier and Justine Biersack. He also had a 10-week-old great-granddaughter, Thea Votier.

The family plans to hold a memorial service to honor his life at a date to be determined.

In lieu of flowers, please consider a donation to the American Lung Association