When the Noroton Heights Shopping Center buildings are torn down (now expected to happen in October), Glen Liquors may be in a temporary structure in a corner of the parking lot next to Palmer’s Market, the Planning & Zoning Commission was told last week.

The project to replace the shopping center at near the corner of Hollow Tree Ridge Road and Heights Road with a combination of stores and apartments is expected to begin with tearing down the present buildings in October. Then it will take about two years for the new buildings to open, the commission was told.

The commission approved a plan that could put Glen Liquors in a temporary structure in the northwest corner of the parking lot beside Palmer’s (in the back, away from Palmer’s and well behind the Wells Fargo Bank on Heights Road).

That doesn’t mean Glen Liquors is going to make the move — talks are ongoing, and the State Liquor Commission must approve it, the P&Z was told.

The commission also allowed some changes in the project: Instead of an underground parking level beneath the building closest to the corner of Heights Road and Hollow Tree Ridge Road, the parking level would be on the ground floor and somewhat smaller. It would replace 4,981 square feet of retail space previously planned for that floor (enough for one or two stores).

Both P&Z Commission votes were unanimous. 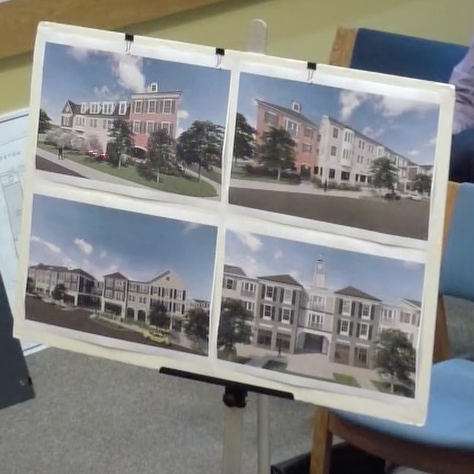 Renderings shown to the P&Z Commission on July 1, 2019 showing what part of the new Noroton Heights Shopping Center would look like. The top left image shows the corner where Glen Liquors is now located.

Greg Palmer, president of Noroton Heights Shopping Center and a member of the family that also owns Palmer’s Market, said the commercial real estate company hopes to keep Glen Liquors as a tenant, along with several other tenants.

Agreements for two of the others — the Noroton Heights Post Office and Fresh Green Light (a driving school), to return to the site are being worked out, and he hopes to get agreements with a couple of others, Palmer told Darienite.com.

The shopping center, which was built in the late 1950s, when Interstate 95 was constructed and replaced a number of commercial buildings in what was then the commercial center of Noroton Heights, will be completely torn down and replaced in one phase, Palmer told the commission. The plan originally was to tear down and build in multiple phases, he said.

The one-phase plan means that there isn’t a spot on the shopping center site for a business to remain in or move to as other parts are demolished and built, he said.

“We’d like them to remain a tenant, since they’ve been there for so long, and we’re trying to find a work-around,” Palmer said. “For them there’s been indecision on their side about where to go, so we’re trying to help them out.

“I don’t even [know] if this will suit their needs,” he continued. “It was an idea I actually hatched to work around it. […] We’ve met once, and they’re interested, but we don’t know if they’ll take the space. […] We’d like to get it approved from the commission to see if they can move forward with the State Liquor Commission. […]

“We don’t want them to have to go away for two years while we’re building,” he said.

If the move to the parking lot is made, Glen Liquors would be in a prefabricated trailer building or attached buildings, Palmer said. “There are several manufacturers.”

Entrances to the parking lot between Palmer’s and the shopping center site will remain on either side of the Wells Fargo Bank on Heights Road, and there should be plenty of parking for customers while construction continues.

No staging of material or trucks is expected to be done from that parking lot, the commission was told. Snow plowed from the parking lot is often piled in the spot where the prefabricated trailers would go, but the snow can be dealt with while keeping enough parking spaces available, Palmer said.

Keeping parking on the ground level for the building planned for the corner of Heights and Hollow Tree Ridge Roads will reduce the expense of the project while slightly reducing its size, said Attorney Robert Maslan Jr., representing the shopping center.

The parking in that building will all be reserved for tenants, Maslan said — no change from the original plan.

The ground-level parking area won’t extend the entire length of the building, the way the underground parking was planned to do, a consulting traffic engineer told the commission, so it will have four fewer spaces — 17 instead of 21.

The previous plans had provided for  more parking than was required for a development of that size, Craig Yannes, an engineer with Tighe & Bond, told the commission, and with the reduction in retail space required to move the parking to the ground floor, five fewer reserved spaces would be needed, he said — so the new plan meets all parking requirements.

Under the new plan, Yannes said, there will be a total of 377 parking spaces, just more than the 376 now required.

Other changes in the plan for the new buildings, all approved by the commission: Extra foliage (bushes and perhaps trees) to cover the view of the ventilation windows for the garage; removal of some “faux chimneys” that had been added for decoration.