A proposal to move Darien Farmers Market to the parking lot of Whole Foods Market was put on the agenda for last week’s town Planning & Zoning Commission, but the item was removed because an agreement hasn’t been reached at this point, the commission was told.

“They haven’t pulled it together yet,” Planning & Zoning Director Jeremy Ginsberg said of the farmer’s market organizers and Whole Foods. “It might be on a future agenda.”

The Darien Farmers Market just opened in the Goodwives Shopping Center parking lot, where the market takes place from 10 a.m. to 3 p.m. on Wednesdays. 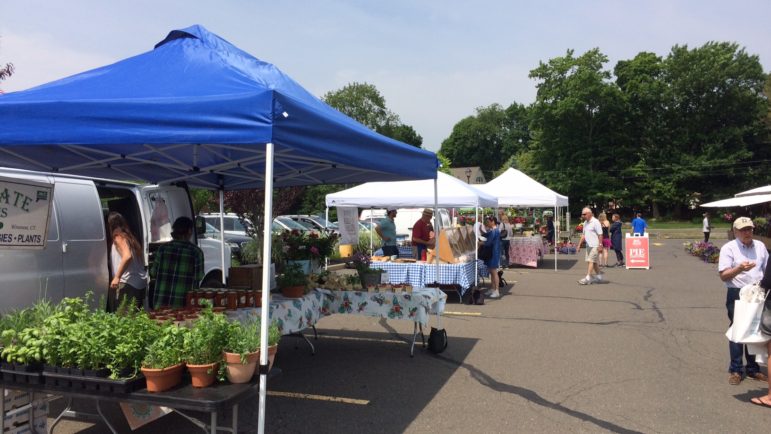 The scene when Darien Farmers Market opened for the year. Could this be in the Whole Foods Market parking lot?

“They have been talking about the possibility of moving,” Ginsberg told the commission. If they do, they’ll need to go before the P&Z to get permission for a change in the property owner’s site plan, he said.

When David Genovese, principal of Baywater Properties, presented the proposal for the downtown project now called the Corbin District, he said an area of the project would be perfect for the farmers market, Ginsberg said.

“David has since met with the farmers, and they’ve talked about that future,” Ginsberg continued. “But David hasn’t gotten started yet, and he’s at least one, two years away from that future, in the meantime, the farmers —

Commission Vice Chairman Steven Olvany asked, “Do they [the farmers market] want to move or is it the landlord [Urstadt Biddle Properties Inc.] that wants them to move?”

Ginsberg paused as Sini looked at the ceiling and said, “All of the above?”

Ginsberg continued to pause. “Ah, I would say —”

“Let’s say all of the above,” Ginsberg replied.

One thought on “Will Darien Farmers Market Move to Whole Foods’ Parking Lot? It’s Being Discussed”