Overnight from Thursday to Friday last week, two vehicles were stolen and two others were entered in Darien, police say, with three of the incidents happening around Tokeneke.

None of the investigations were over as of Monday afternoon, police said.

In the first incident to be reported, at 7:24 a.m., Friday, Nov. 17 the owner of a green 2000 Acura Integra told police he left it locked in the driveway of a home in the 300 block of West Avenue the night before. He said the vehicle only had one key, and he still had it.

Police found no evidence of forced entry (like broken glass on the driveway). Two car-computers valued at $600 were inside the vehicle.

At 9:50 a.m., the owner of a gray 2016 BMW X3 sport utility vehicle reported it stolen from a driveway at 5 South Trail. The SUV had been parked there overnight. The owner said she didn’t believe the key had been left in the vehicle, but she couldn’t find it. Police said they later confirmed that the vehicle was unlocked.

Cars parked overnight outside 5 and 6 Rebel Lane were entered, the owners discovered on Thursday morning. Neither of the cars were locked overnight.

At 5 Rebel Lane, the owner of a blue 2015 Lexus IS250 called police at 10:50 a.m., telling them she found items that had been in the car were strewn inside it. It didn’t seem like anything had been taken.

Police canvassed neighbors to see if they knew of anything suspicious from the night before. At 6 Rebel Lane, the owner of a gray 2009 BMW 128i told police that when she got in the car that morning she found the glove box open and its contents on the passenger seat. Nothing appeared to have been taken. 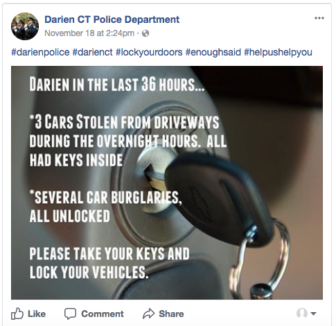 In addition to investigating the cases, Darien police posted a message on Facebook at 2:24 p.m., Saturday, saying three vehicles had been stolen in town in the previous 36 hours and others had been burglarized.

As of Tuesday morning, it is unclear whether or not a third motor vehicle theft took place. If so, it wasn’t reported in the weekly police news release. At Darienite.com’s request, a police spokesman is looking into the matter.