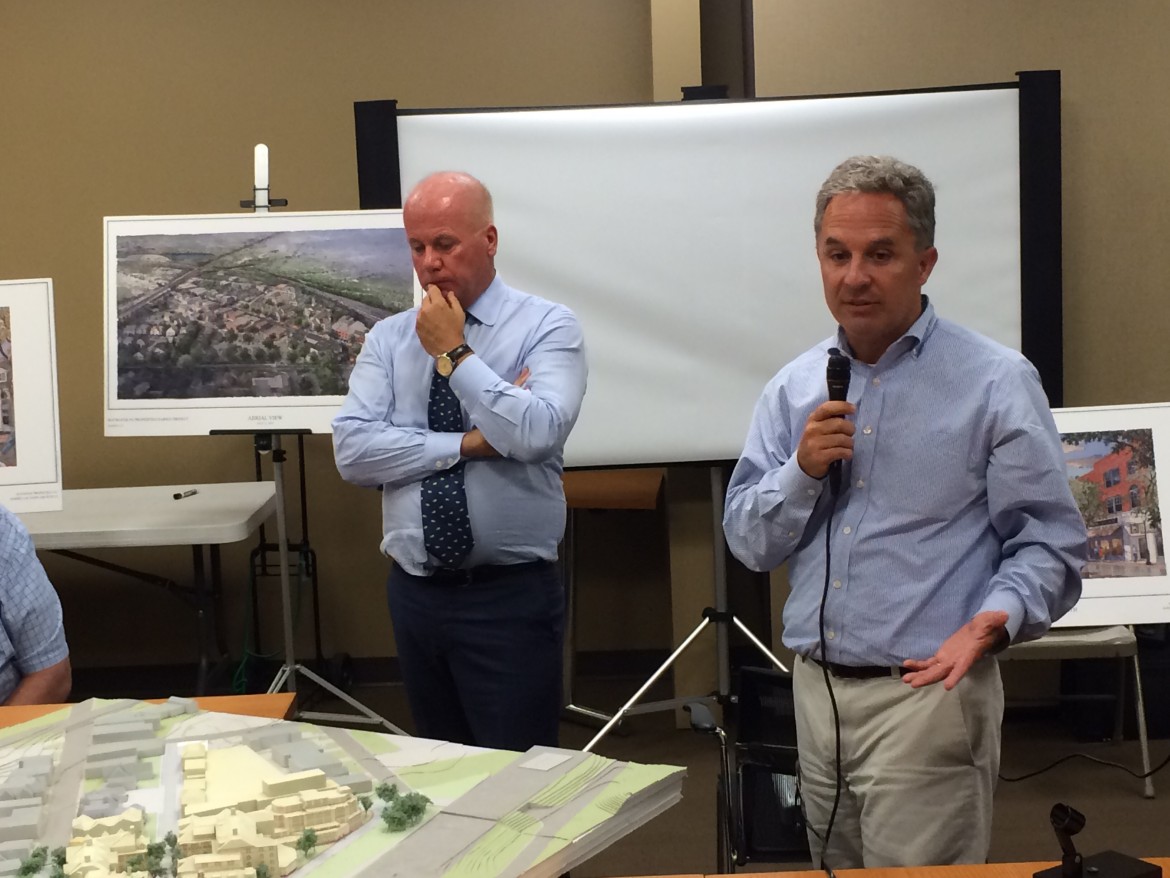 From left, Architect Gary Brewer and David Genovese, founder and head of Baywater Properties, on Tuesday night presenting their proposal for downtown development along the Post Road and Corbin Drive.

Downtown Darien and the business district of Noroton Heights would be massively changed with proposed redevelopment projects of a type not seen since the highway was built through town, according to descriptions presented Tuesday by the owners.

David Genovese, principal with Baywater Properties, which already owns a large part of downtown, and his architects described how the block between Corbin Drive, the Post Road and Interstate 95 would be torn down and replaced with somewhat more retail space, new apartment buildings and a five-floor office building.

Greg Palmer, an owner of Palmer’s Market and the Noroton Heights Shopping Center, described how the present shopping center (at the west end of the commercial district) would be replaced with multi-story buildings containing stores on the ground floors, more apartments above and some underground parking.

Teams for both property owners gave the first description of their development ideas at a special joint meeting of the town Planning & Zoning Commission and the Architectural Review Board on Tuesday in a jam-packed Town Hall room. Slides and small models accompanied the presentations.

Each proposal was an “informal” description meant to give the boards time to understand the projects and suggest changes before formal requests for approval are submitted, possibly as early as this fall.

Common to both of the separate, independent plans: a mix of above-ground and underground parking, higher buildings with apartments, more aesthetically pleasing but traditional architecture, spaces like town squares or town greens that developers say will provide a public place for the community to enjoy. Each developer said his project is meant to create a space where people would enjoy walking and lingering.

Each development could be described as “transit-oriented” with very close access to both Interstate 95 and New Haven Line train stations. Both envision more people using the developed property, with increased motor vehicle traffic. 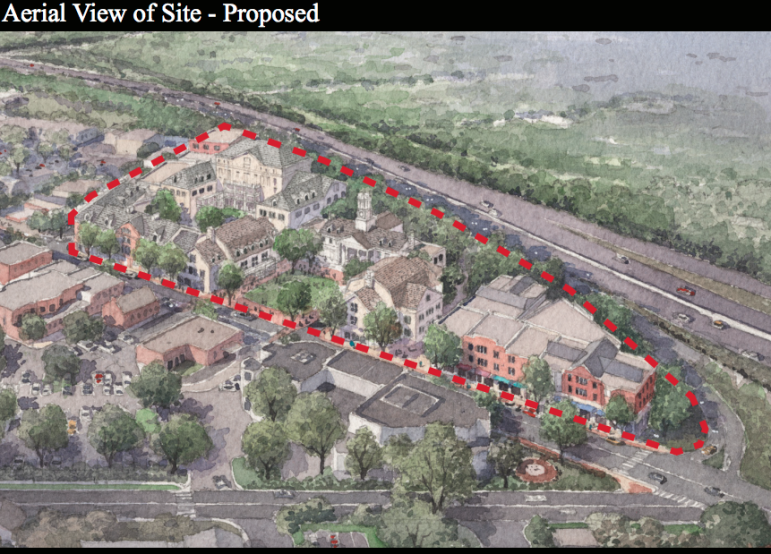 Drawing of an aerial view of the proposed redevelopment downtown, between Interstate 95 (on top), the Post Road (on bottom) and Corbin Drive (far left). The Darien Sport Shop building can be seen in the lower right, Darien Playhouse building at the left, both are across the Post Road from the site. 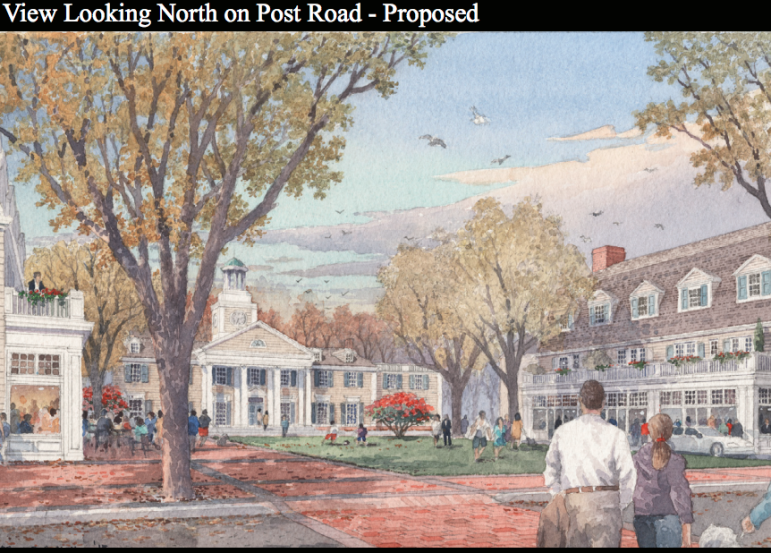 Looking across the Post Road toward the proposed half-acre "Market Green."

The same view as the previous picture, as it looks today. This shopping plaza would be replaced by the front of the "Market Green."

View up the Post Road from the sidewalk in front of Darien Sport Shop, as envisioned in the proposal. (Contributed)

Same view as the previous picture, as it looks today. (The developers are considering having the utility wires buried.) (Contributed)

This apartment building would be near the center of the development, on a new street (Market Lane) and would be one of the two tallest buildings, with six floors. The left side would face Corbin Drive. Shorter buildings would block its view of (and view from) the Post Road. (Contributed)

A map of the site (showing a possible extension of Market Lane further up the Post Road (eventually reaching Center Street). (Contributed)

The proposed five-story office building at the corner of Corbin Drive and Old Kings Highway South: After the bottom two stories, the building would have a set back (farther from the street), then a set back two stories above that. An underground parking garage entrance would be at the site of the present Post Office building. (Contributed) 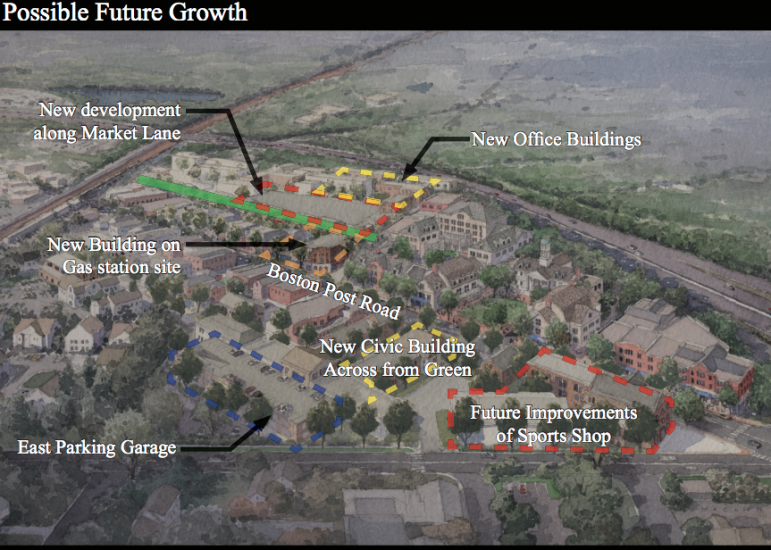 Other ideas for future development surrounding this one: Extending Market Lane behind the Post Road, with shops and a parking garage behind them where the Center Street parking lot now sits; replacement office buildings on Old Kings Highway South, a parking garage in the lot behind Darien Sport Shop and a restyling (or replacement?) of the Sport Shop building with a more traditional look. (Contributed)

Genovese and developer Penny Glassmeyer have bought up all or just about all of the triangular block they intend to develop. Included in their plan is parking, mostly underground, for 1,200 vehicles, 73,000 square feet of retail space (about 20,000 more than at present), roughly 76 apartments in several buildings and 98,000 square feet of office space.

New streets would be part of the development:

A half-acre village green or town square would be the centerpiece of the development, with space for a farmer’s market in the warmer months and an ice rink in the winter. The park would be a gathering place, a spot to linger and an area to walk to for people downtown, according to the description given to the town boards.

An anchor store of 20,000 square feet located where the Bank of America building now stands (across the Post Road from Darien Sport Shop) would have underground parking for about 300 vehicles. Genovese said he can’t name the potential tenant that is very interested in the location, but he described a well-known, Maine-based company that might be L.L. Bean.

Other than the anchor store, the development would have roughly the same amount of retail space, mostly for small stores, as the site has right now. Genovese said he intends to find other space for the retail tenants there now and wants the same or similar stores in the new development — locally owned stores run by people who will put their distinctive marks on their businesses. He’d also like to see retail establishments like a wine store, cheese shop, bakery or restaurants there.

The buildings in the development are meant to look like they were built independently and gradually over time, as a typical New England business district would look, said Gary Brewer, an architect with Robert A.M. Stern Associates. Brewer said that his firm has built new buildings that have been praised by people in a community as good renovations of old buildings — just the feeling he was hoping to achieve.

Genovese wants to put his plans, illustrations of what the development would look like and other information on a website so that the public can understand the proposal. The website isn’t up yet, but its Web address will be www.LiveWorkPlayInDarien.com 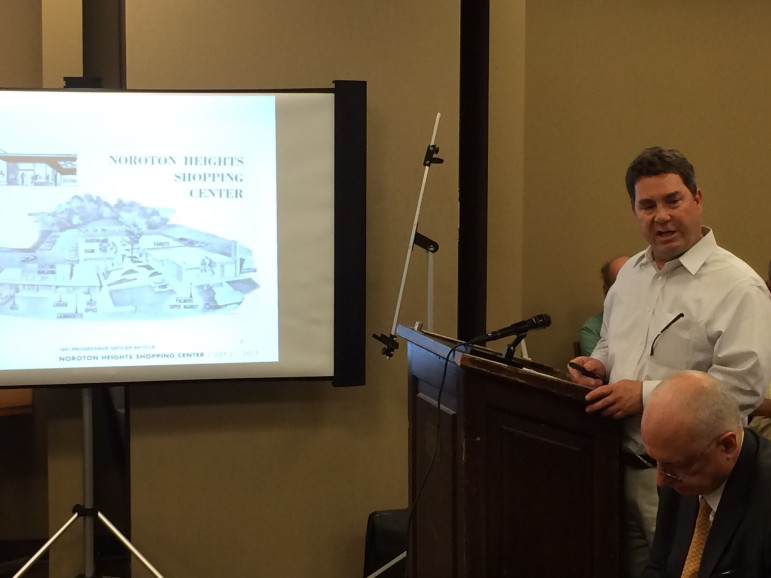 Greg Palmer of Palmer's Market on Tuesday gave the two town boards an overview of the history of the site and intentions of his family, which owns the Noroton Shopping Center property. 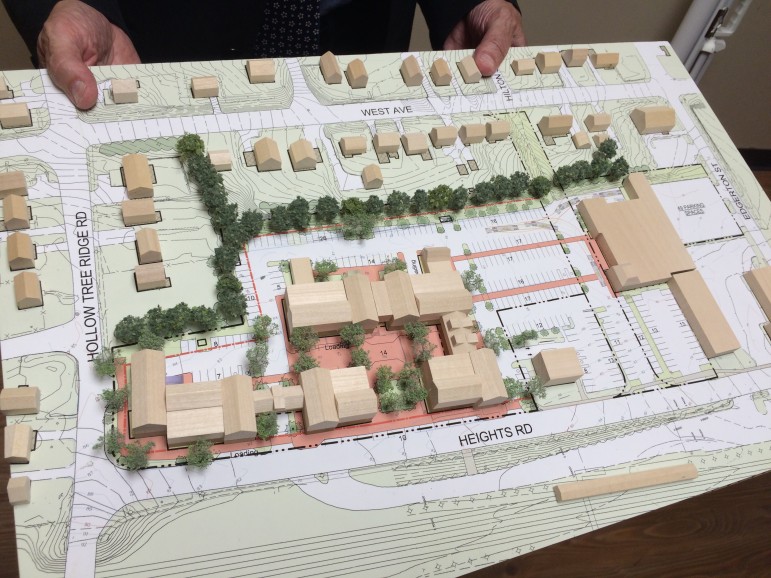 A model of the site: Heights Road and the railroad station is on the bottom, Hollow Tree Ridge Road on the left, West Avenue on top.

A rendering of an aerial view, as seen from above the intersection of Heights Road and Hollow Tree Ridge Road.

Roughly the same perspective as seen in the last picture (from above the intersection of Heights Road and Hollow Tree Ridge Road).

Aerial view as seen from above the Noroton Heights Railroad Station or Interstate 95.

A view from ground level of what the "village square" area would look like.

An aerial view of the development from above or behind Palmer's Market, looking southwest toward the intersection of Heights Road and Hollow Tree Ridge Road

A map of the site, as proposed 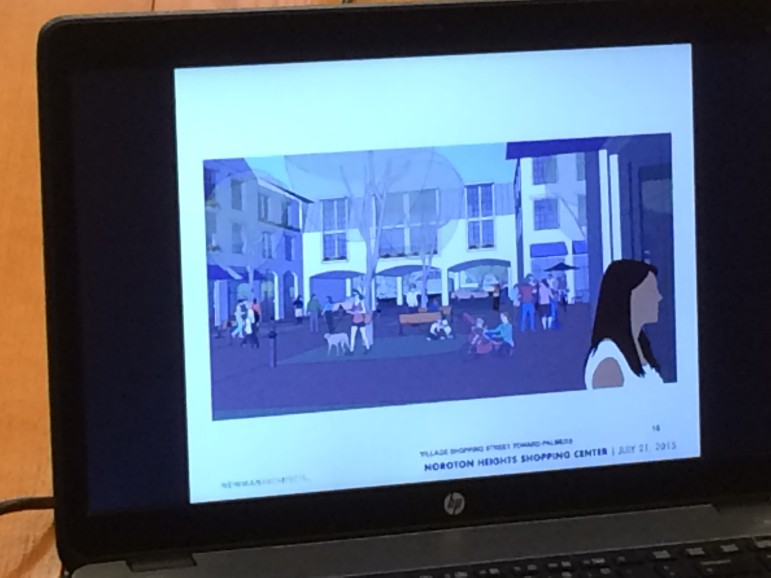 Another view of the village square area, looking east toward Palmer's Market (visible under the two-story bridge)

The nearly four acres west of Palmer’s Market and the Wells Fargo bank building would be completely transformed with the proposal presented to the town boards by Greg Palmer and his development team.

The current retail space on that land, about 29,500 square feet, would be increased to 35,000 square feet on the ground floor of about five new buildings, some connected with upper-floor bridges arching over space between the buildings. About 65 to 80 apartments would be located on the upper floors, with some buildings toward the steep slope in the back (north side) of the development three stories high.

A building in the southwest corner of the development, at the corner of Heights Road and Hollow Tree Ridge Road (where Glen Liquor and its parking lot are now located), would have underground parking for residential and commercial tenants. The parking lot exit located near that intersection would be eliminated.

It would be one of about five buildings that would be separated by streets or walkways and a village square in the middle, largely paved but with trees and plantings — a spot meant for people to walk to, rest at and enjoy, according to the development team.

An east-west “village street” would lead to the Palmer’s parking lot and supermarket to the east. As with the proposed downtown Darien development, the architecture would be a mix, meant to evoke a place built over time by different owners.

Before the highway was built through Noroton Heights, Palmer told the boards, his family’s store and several others formed a small village center close to the intersection of Noroton, Hecker and Linden Avenues.

With the new development, he said, “We hope to create the village feel of a square,” with locally owned businesses in a public space appreciated by the surrounding community.

Members of the two boards asked each team of developers some questions, usually about how much increased traffic could be expected or just how tall buildings would be. (Questions were not taken from the audience at this meeting, and neither project is at a stage where detailed traffic matters have been researched.)

Susan Cameron, chair of the Planning & Zoning Commission, and other commission members questioned Brewer about the number of stories of the tallest apartment building and the office building, each of which would have six floors. Members of the audience scoffed and laughed when Brewer described some of the buildings as having two stories or six stories and an attic floor with dormers (attic windows) rather than three or six stories.

Attorney Robert Maslan Jr. of Darien brought up the current building height regulations for the Noroton business district, saying he thought a mistake had been made in the language barring three-story buildings. He said he doubted town officials wanted that regulation to apply to the northern end of the site, which abuts a high, steep slope that would likely dwarf a three-floor structure.

Two other major property owners are expected to propose developments very close to the Noroton Heights Shopping Center. One large property is located just to the east, where Stop & Shop and Equinox now stand. Another is next to Interstate 95, off of Hollow Tree Ridge Road and to the east of the Avalon Darien development.

Cameron said any Darien resident who wants to tell town officials what he or she thinks about the proposals or about what’s needed on the sites for them can email pocd@darienct.gov. Comments sent there will be read by town officials, she said.

That’s also the email address for the town Plan of Conservation and Development, a regularly revised document now being put together as a guide for town officials deciding on development in coming years.