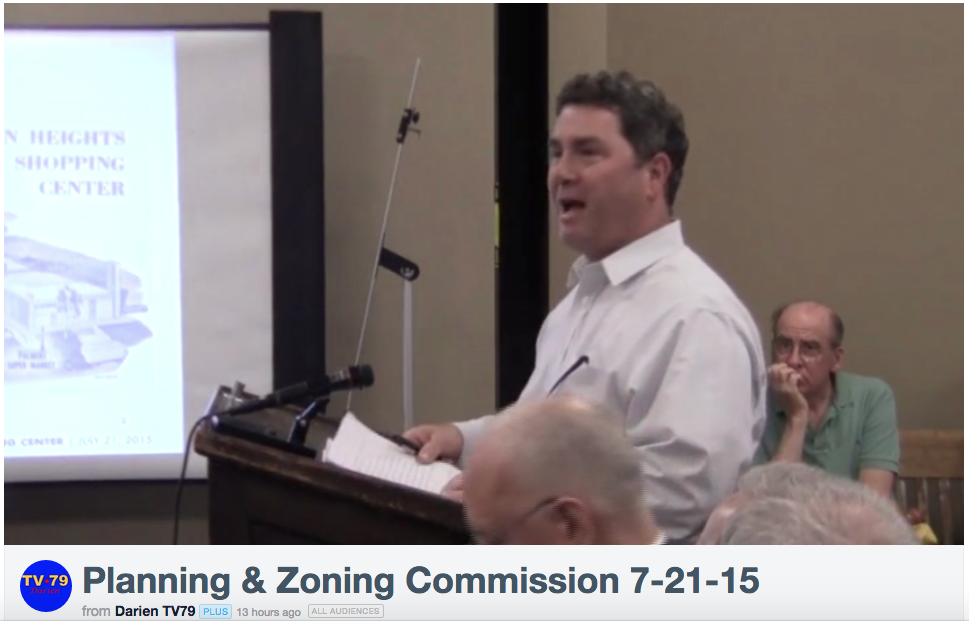 Greg Palmer, one of the owners of the Noroton Heights Shopping Center tract proposed for redevelopent, at a special Tuesday meeting of two town boards.

You can now watch the presentations on the redevelopment proposals for large parts of downtown Darien and the Noroton Heights shopping district on TV79 online and on cable television. 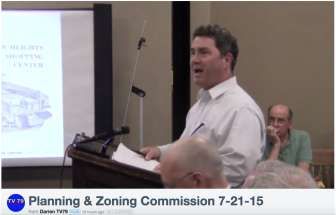 Greg Palmer, one of the owners of the Noroton Heights Shopping Center tract proposed for redevelopment, at a special Tuesday meeting of two town boards.

TV79 announced the availability of the videos Thursday morning. The on-demand Vimeo version is on this Web page. The video shows the full special meeting of the Planning & Zoning Commission, which met jointly with the Architectural Review Board. The meeting lasted just over 2 1/2 hours.

The first hour or so shows the Palmer’s presentation on its Noroton Heights development proposal; in roughly the second hour, David Genovese’s and Penny Glassmeyer’s proposal for downtown Darien is presented.

“It is also airing on Darien TV79 at 7 a.m. and 7 p.m. through the end of this week, when it will go into a fresh rotation for the following week,” TV79 Program Director Jim Cameron wrote in the announcement.

Inconvenient Venue for an Important Meeting

One of the most important town board meetings of the year was held in what became a very cramped Room 119 in Town Hall, a room made up of two former classrooms (from the building’s days as Mather Junior High School). The projection screen was at a right angle for most of the audience, and the view was blocked for many by the speakers making the presentations.

Members of both boards took up a large part of the room. At the last minute, many chairs were brought in, but some members of the audience still had to stand. The seats in the front were taken up by the teams assembled by landowners for each of the two redevelopment projects.

Cameron wrote in his emailed announcement: “[W]e could not air the meeting live on Tuesday night because it was held in Room 119 where we only have taping capabilities but no ‘live’ cameras.  We tried very hard to get the meeting moved to Room 206 to carry it live, but were turned down.”

Room 206, a larger space where a projection screen could have been seen by members of the audience, was being used by the Board of Finance. In the even larger Town Hall Auditorium, the Pedestrian Infrastructure Advisory Committee was scheduled to meet. (Due to regulations in the state Freedom of Information Act, the time and place of board meetings needs to be filed 24 hours in advance, excluding Sundays; presumably that applies to room changes, as well.)

There appears to be no coordination whatever among Darien’s town boards and commissions regarding when they schedule meetings (regular meeting schedules are set for the year by January of that year, according to state law).

The town’s boards and commissions very often schedule meetings on Mondays and Tuesdays, sometimes Wednesdays and occasionally Thursdays, usually in the evenings. Very often, important meetings take place at the same time in different places — the Representative Town Meeting and the Board of Selectmen on Mondays, the Board of Finance, Planning & Zoning Commission and Board of Education on Tuesdays.

Editor’s note: I stood for two hours in order to be in a spot where I could see both the projection screen and the speakers.