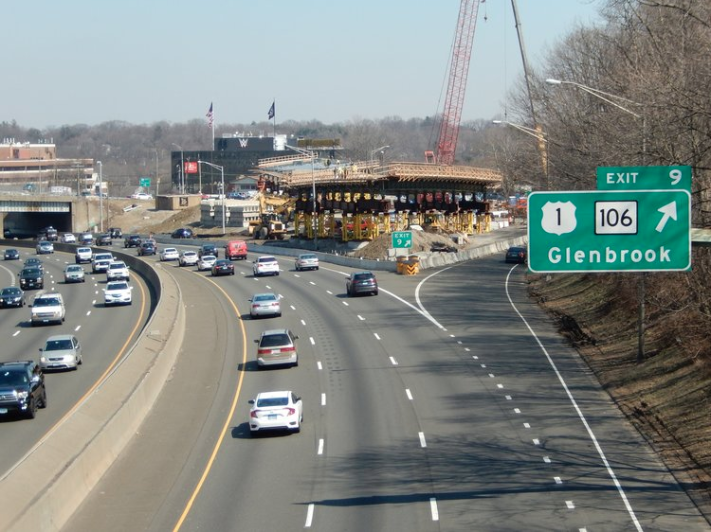 Don’t drive anywhere near I-95 in Stamford and Darien and don’t even think of driving over the Route 1 bridge at Exit 9 on the weekend of May 31 to June 2, or the following weekend.

That’s the advice from the Connecticut Department of Transportation, which is replacing the bridge — which has been there since the highway was built in 1958 — on those two weekends.

On each side of the highway at the construction site, a single lane, using the exit ramps, an entrance ramp and a ramp constructed specially for the purpose, will be available for those poor drivers who don’t have any alternative.

Traffic is expected to be backed up for mile after mile, throughout the weekend. It’s gonna be Carmaggedon. 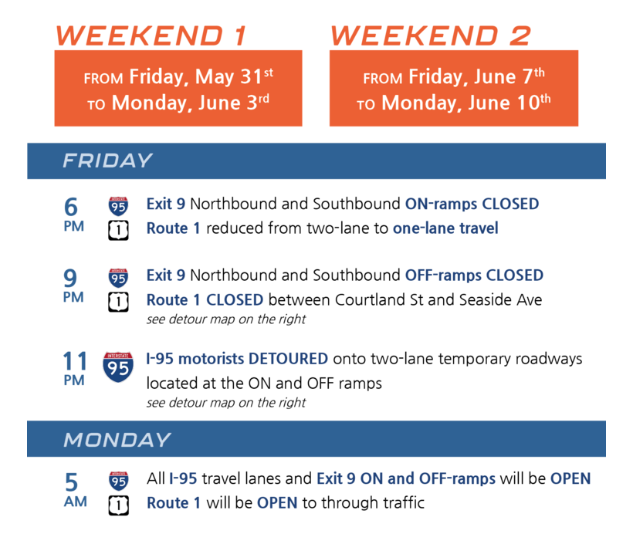 When I-95 traffic is stopped in or near Darien, frustrated drivers may exit and start driving through other roads in town, especially the Post Road, so expect heavy traffic in town.

In each direction on I-95, what is normally three lanes of traffic, often busy on the weekends, will be replaced with one lane on a ramp going around the highway, with a speed limit of 20 mph. Many drivers are going to want to get off the highway to use local roads.

By the following Monday morning, one of the massive metal and concrete bridge pieces is supposed to be in place, carrying Route 1 (East Main Street) over the highway in Stamford, just west of the Darien border. On the next weekend, the other big piece is supposed to be placed. Special vehicles with the combined power to lift each of the pieces will be used.

The work is expected to go through the night, and, according to ConnDOT officials who described the project last year, the plan is to have the bridge capable of handling traffic, both overhead on Route 1 and underneath on I-95, sometime on Sunday (whether or not it’s reopened that day). 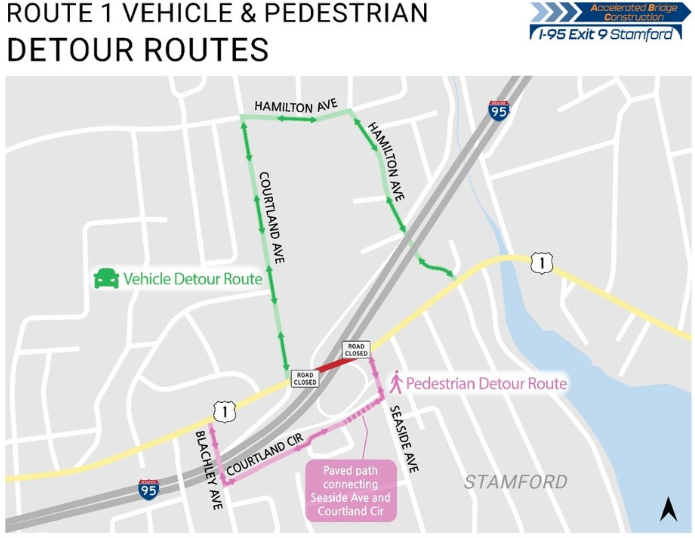 The target for reopening the bridge is 5 a.m. on each of the two Mondays. That’s supposed give the construction crews lots of time to make up for any unexpected delays.

If something goes wrong, and the bridge can’t be opened by Monday morning’s commuter traffic — well, we have no word to describe whatever is worse than a Carmaggedon (“Carpocalypse”?).

If you want to see the massive bridge pieces, each the size of a small building, put in place, you don’t have to go there yourself — on ConnDOT’s specially created website for the project, “there will be live streaming video feeds of construction throughout the weekends when the bridge spans are installed,” the department announced.

Scheduled Weekend Closure and Detour of I-95 in Stamford Scheduled to Begin on Friday, May 31, 2019

The Connecticut Department of Transportation is reminding motorists that the first of two scheduled weekend closures and detours of I-95 in Stamford at Exit 9, is set to begin on Friday, May 31, 2019.  The closures are necessary to facilitate the installation of two new bridge structures carrying Route 1 over I-95 utilizing Accelerated Bridge Construction (ABC) techniques. MOTORISTS ARE STRONGLY ADVISED TO AVOID THE AREA DURING THE CLOSURE TIMEFRAMES TO AVOID HEAVY TRAFFIC DELAYS.

The first weekend closure will occur on Friday, May 31, 2019, with the Exit 9 on-ramps closing at 6 p.m., followed by a 9 p.m. closure of the off-ramps and the closure of Route 1 at the bridge (between Courtland and Seaside Avenues). Then, at 11 p.m., I-95 will be closed at Exit 9, with traffic diverted to temporary roadways using the highway on and off-ramps. Both I-95 and Route 1 will be re-opened to traffic by 5 a.m. on Monday, June 3.

The second scheduled weekend closure will occur on Friday, June 7, 2019, following the same pattern used for the first closure, with Route 1 and I-95 re-opened by 5 AM on Monday, June 10. 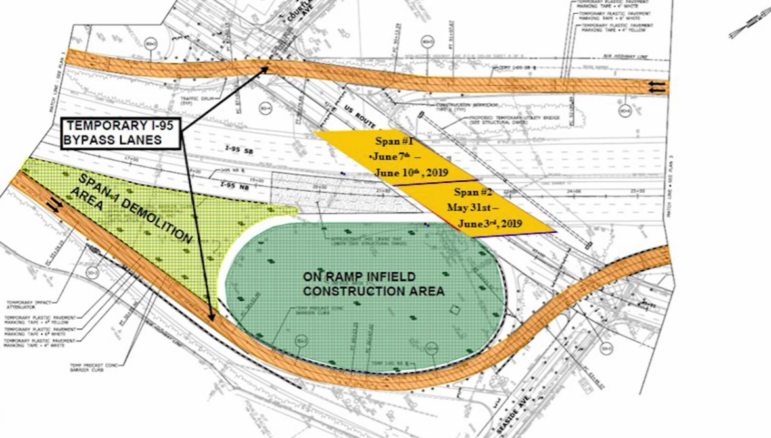 Map of the project (released June 2018), showing the new spans, the oval and temporary bypass lanes. Ignore the dates on the spans: Those and other minor changes were made since the image was created, ConnDOT officials said.

Utilizing ABC (accelerated bridge construction technology) techniques, both the east and west spans of the new bridge superstructures were constructed off-line (with virtually no traffic impacts) in the infield area of the I-95 northbound Exit 9 on-ramp. During the two scheduled weekend closures, the existing spans will be demolished and the new spans will be lifted and set onto piers and abutments using SPMT’s (Self Propelled Modular Transporters) . One span will be removed and replaced per weekend closure.

By utilizing ABC rather than conventional construction methods, the majority of traffic impacts associated with the project are condensed into the two scheduled weekend closures.  If conventional construction methods were used, multiple years of lane closures on I-95 as well as Route 1 would have been required, resulting in daily and significant traffic congestion in the vicinity, particularly during weekday morning and afternoon rush-hours. 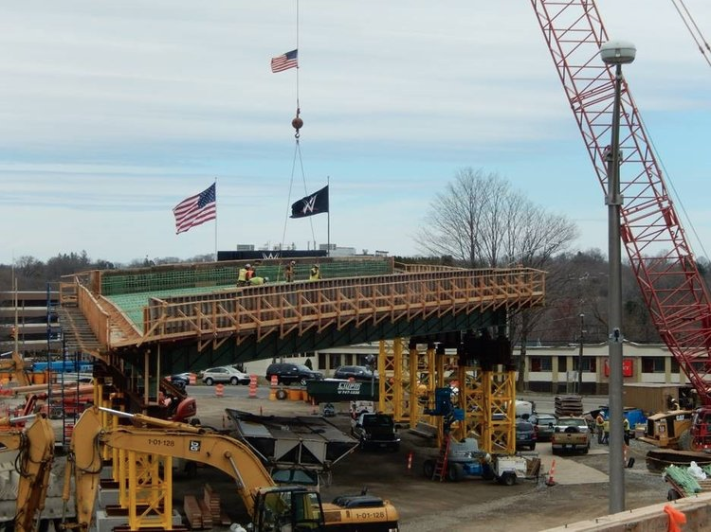 One of the spans (WWE headquarters is in the background, along with the motel). Workers assemble the rebar mat of Span 1 before the concrete deck is poured. (Photo taken on April 10, 2019 by Jill Barrett.)

Six hundred and twenty eight cubic yards of concrete weighing over 1.5 million pounds was used to build the two bridge spans. About 32 miles of rebar was installed within the newly constructed bridge spans, and all new structural steel was used to create the new bridge superstructures.  Each individual span to be lifted and set into place weighs approximately 1.6 million pounds, and 1.8 million pounds respectively.

The CTDOT has established a project website, www.i95exit9.com. There will be live streaming video feeds of construction throughout the weekends when the bridge spans are installed. 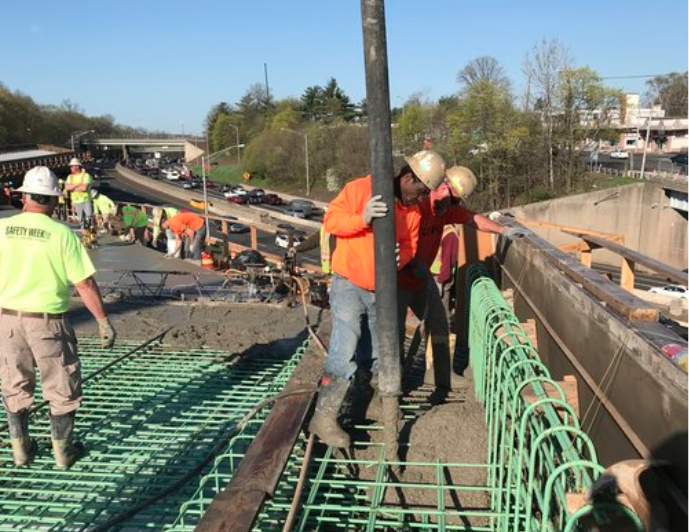 In the two weeks leading up the closures, the contractor will be busy preparing the site as well as equipment that will be used to move the bridge spans into place.

8 thoughts on “State Issues CARMAGGEDON Warning for Two Weekends of I-95 Closures at Exit 9, Starting 6 PM, Friday, May 31”