If you’re going to steal food, why not lobster tails and steak?

That’s the surf & turf loot that a 52-year-old man is accused of taking from Whole Foods Market. Darien police described his actions with this account (including accusations not proven in court): 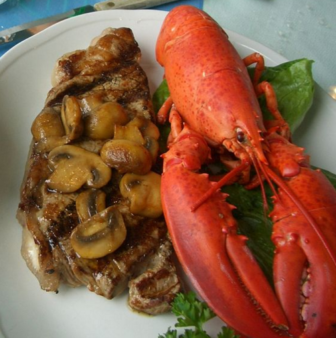 Surf and Turf (image by User:Chensiyuan on Wikimedia Commons)

Daniel Horowitz, who’s last known address was on Park Street in Stamford, but who was said to have moved from there, ordered $94.34 worth of porterhouse steaks from the meat department at the 150 Ledge Road supermarket at about 6 p.m. on May 15.

He then moved on to the seafood counter, where he ordered eight lobster tails priced at a total of $87.92.

Horowitz then walked through the produce department and out of the store, but not without a store employee noticing and following him outside. The employee saw Horowitz enter a black pickup truck, a black Ford F150, and ride off. The employee got the license plate number of the truck.

Darien police were notified of the incident, and the store manager told police that the store did want to press charges if police could find the thief. The store employee went to Darien Police Headquarters and gave police a written statement — along with a picture of the pickup truck.

The truck is registered to Horowitz at an address on Park Street in Stamford. Police found records indicating Horowitz had an active arrest warrant from Norwalk police charging him with failure to appear in court for a larceny charge.

Police reviewed the store surveillance video record and met with Stamford police at the Park Street address where Horowitz was said to be living. There, a resident told police that Horowitz had moved away last August.

The next day, police found in their in-house computer system an incident report from Stamford about an abandoned vehicle — the pickup registered to Horowitz. The vehicle was found in front of a home on Dora Street.

On Wednesday, May 25, police were able to get a warrant approved which charged Horowitz with sixth-degree larceny. The bond for the warrant was set at $10,000.

Two days later, on May 27, Stamford police notified Darien that Horowitz had been arrested and was in custody. Stamford police released Horowitz on a promise to appear in court and then turned him over to Darien police.

Because Horowitz experienced a health problem during the processing of his arrest, he was taken to Stamford Hospital, where he was evaluated and released. Darien police then took him back to the station to complete the arrest process. He was later taken back to the hospital after he complained of a health problem.

One thought on “Special Loot of the Day: Lobster Tails, Steaks that Police Say a Man Stole from Supermarket”