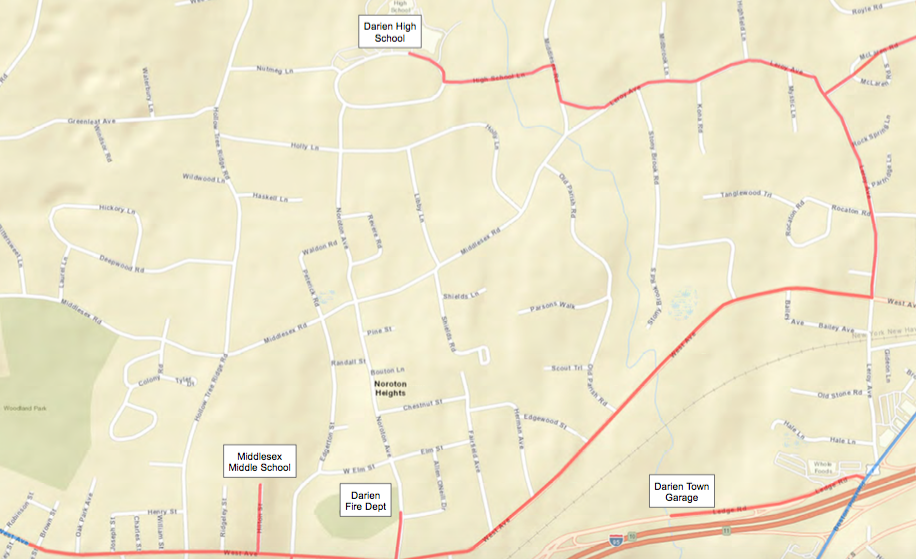 The new gas mains follow West Avenue from an area just west of the intersection of West Avenue and Brown Street to Leroy Avenue, and then from Leroy Avenue to High School Lane. Other streets include all of Ridgely Street, McLaren Road and a short stretch of Noroton Avenue between West Avenue and Noroton Heights Fire Department. Not shown here: Gas mains will also be installed under all of Greenwood Avenue and then north on Hoyt Street to the New Canaan border.

Homeowners along the four-mile route where Eversource is installing natural gas mains this summer and (possibly) fall can get a big discount on hookups, and then lower energy bills that would make back the initial investment of new equipment costs after 10 to 12 years, utility officials say.

But there’s a bigger, indirect gain for every homeowner who switches from heating oil or propane to natural gas, and it’s not just utility officials who say so. That can come with higher home resale values, which by themselves could pay for the installation, aside from any utility-bill savings.

The big financial gain for the 200 or so homeowners with property along the gas main routes could come when they sell their home, because homebuyers often pay more for homes heated by natural gas, according to some experts not affiliated with the industry.

According to a 2012 study by a real estate business in the (colder) Boston area, natural gas in homes increased their sales value by $11 per square foot, or $22,000 for a 2,000-square-foot home (more information below).

On Thursday, Eversource held an open house event at Mather Community Center. In the first hour, about 75 people showed up, including 10 who weren’t along the route but just wanted to learn more. A total of about 200 Darien homes are along the route; Darien already has about 800 customers since gas service came to town in the 1970s.

“The goal, weather permitting, is to have all of this in the ground by late fall,” said Mitch Gross, an Eversource spokesman who was at the event.

Customers with property fronting the streets where the gas mains will go can save $5,000 off the cost of installation, Gross said. Eversource literature at the Thursday event said the “gas expansion ‘SE’ tariff” would be free, although there will be other costs for any customer switching over.

The service that would be free is to install (underground on your property) a plastic gas line that’s between a quarter of an inch and three-eighths of an inch wide. At one end it would connect to the 12-inch-wide steel gas main; at the other, to the foundation of your house. That’s done within a single day,said Chris Ehlert, an Eversource supervisor for residential gas sales.

A contractor certified for installing the equipment would be hired by you, and works under various regulations related to costs and practices like giving you a written estimate. That takes about another day. On yet another day, a town inspector would check to make sure the connections are safe. On a fourth day, an Eversource technician would install the meter and get service started.

But potential customers need to make the decision and sign up before the gas mains are put in and roads repaved this fall: “Once the roads are repaved, there will probably be a charge,” Gross said.

Customers will need to make an initial investment in new equipment and the costs of installing that equipment in order to reap the benefits, which should pay for themselves over 10 to 12 years, Ehlert said.

Natural gas is cheaper than both heating oil and propane, he said. Here’s how much cheeper:

By replacing older equipment, customers would also be modernizing, making a change from less efficient heating systems to the latest natural gas furnaces. A 15- to 20-year-old heating oil system may be only 75 to 80 percent efficient, he said.

“For every dollar you’re spending on home heating oil in an 80 percent efficient system, you’re sending 20 cents up the flue,” Ehlert said. Replacing that would save money even with a new heating oil system that didn’t get replaced with gas service.

The cost of installation includes replacement boilers (for forced hot water or steam radiators) or furnaces (for warm air systems).

For information on more options, contact Eversource. Installation fees can increase beyond these prices, depending on particular circumstances at each home. Eversource will also discount utility bills by $250 for customers who sign up, Gross said. [Update, Tuesday, 10:40 a.m.: The $250 discount is only available for those who sign up this month or sometime in May.]

Homes with propane systems may not need to replace anything more than a propane valve with a natural gas valve, which could reduce the cost by several thousand dollars, Ehlert said.

If a propane heating system needs to be replaced, it could be done for between $1,900 and $3,400, which could be recouped through lower utility bills in three to five years, he said.

Eversource has 232,000 natural gas customers in 73 cities and towns in the state, and it already has plenty of capacity to bring natural gas into the state, Gross said. A natural gas expansion project for 550 potential customers is also planned for New Canaan.

Where the New Gas Mains Are Going

The project to dig up streets for gas main lines has already started, with the first work being done on Leroy Avenue (where a line will go from the Post Road to the Darien Public Works Garage next to the Darien Recycling Center and transfer station), and Greenwood Avenue, in the northwest corner of town.

The Greenwood Avenue project will extend lines about 1.5 miles from the corner of Greenwood and Camp avenues to Hoyt Street and then north to the New Canaan border, about where Barringer Road meets Hoyt Street.

The main line will continue north and then west on Leroy Avenue to its intersection with Middlesex Road (at the northern edge of the small park there) and then to High School Lane, allowing a gas hookup at the high school. (This Google Maps page shows the 2.8-mile main route, without the gas main branches.)

Along the way, gas main lines will branch off onto Ridgeley Road — which will bring gas service to Middlesex Middle School — and along a short stretch of Noroton Avenue from Heights Road to the Noroton Heights Fire Department. McLaren Road (but not McLaren Road South) will also get a gas main line. 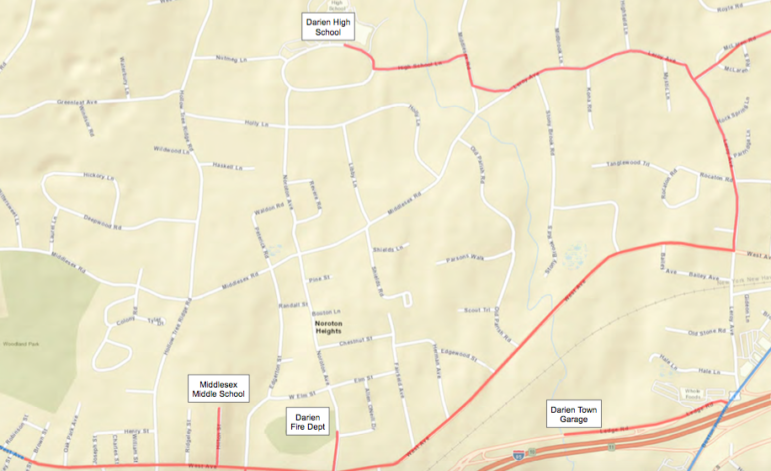 The new gas mains, in red, follow West Avenue from an area just west of the intersection of West Avenue and Brown Street to Leroy Avenue, and then from Leroy Avenue to High School Lane. Other streets include all of Ridgely Street, McLaren Road and a short stretch of Noroton Avenue between West Avenue and Noroton Heights Fire Department. Not shown here: Gas mains will also be installed under all of Greenwood Avenue and then north on Hoyt Street to the New Canaan border. 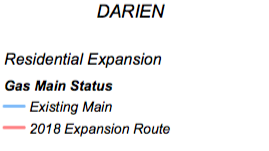 Red for the new natural gas main line, blue for the existing line 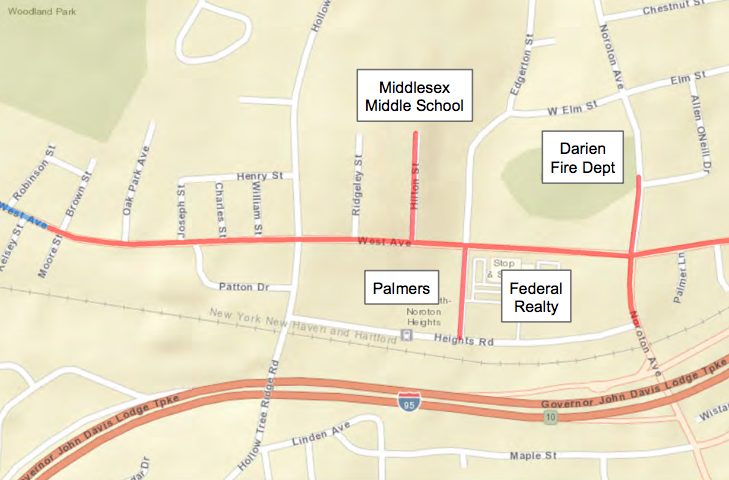 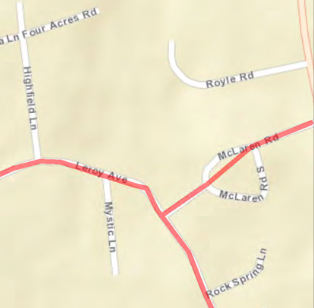 McLaren Road will also get a natural gas main

When Selling Your Home

A 2012 study in Boston conducted by Craig Foley of ReMax Leading Edge compared sales of 4,600 homes to see whether or not those heated with natural gas had an edge over those with heating oil when it came time to sell, according to the Boston Globe (and at least one other report). The Globe reported in July 2015:

It turned out that natural-gas homes commanded $11 more per square foot — that adds up to a $22,000 premium on a 2,000-square-foot house. “Those numbers,” says Foley, “reinforced a number of studies nationally that said for every $1 of annual energy savings, it equates to $15 to $20 at the time of sale.”

That was Boston, where winters are somewhat colder and longer than on the coast of Long Island Sound. The study is also about six years old.

The median and average area of Darien homes that went on the market last week was about 3,000 square feet, according to Deirdre McGovern’s Darien & Rowayton Real Estate Report, but homes along the gas-main route could be smaller.

When selling a home with energy-efficient or environmentally friendly features, the Globe article reports experts saying that homebuyers tend to be more interested in saving money, and a simple description of the improvement shouldn’t get lost in a sea of details and abstruse language. Basic facts about how much you saved could be very effective. (You might show a prospective buyer some of your gas bills — and maybe your old heating oil or propane bills for a comparison, if you can still find them.)