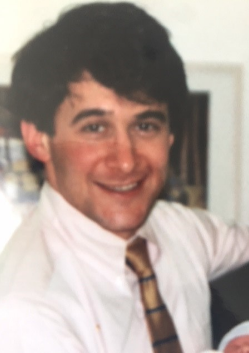 Sanford Kaynor Jr., 58, died on April 19. Visitation and a memorial service will be held on April 28 in New Orleans, with an interment service at St. Luke’s Episcopal Church in Darien at a later date.

Sanford Kaynor Jr., 58, died on April 19. Visitation and a memorial service will be held on April 28 in New Orleans, with an interment service at St. Luke’s Episcopal Church in Darien at a later date.

Born in Manhattan on May 19, 1959 and raised in Darien, he was predeceased by his parents Sanford Bull Kaynor, Sr. and Laura (Sanford) Kaynor.

A descendant of the earliest settlers of the country, his ancestors included Elihu Yale; Thomas Hooker, the founder of Hartford; and soldiers who fought at the Battle of Brandywine in the Revolutionary War and the Battle of Plattsburgh in the War of 1812.

Sandy graduated from St. Paul’s School in Concord, NH, then Yale University with a B.S. in economics and political science, the recipient of the Rushmore Prize for high distinction in scholarship and athletics.

While at Jonathan Edwards College at Yale, he rowed lightweight crew, sang with the Alley Cats and the Whiffenpoofs, and was a member of Scroll and Key.

— an obituary from Lake Lawn Metairie Funeral Home and Cemeteries

He went on to receive his J.D. from the Pritzker School of Law at Northwestern University and his MBA from the A.B. Freeman School of Business at Tulane.

Over the course of his career, Sandy specialized in private equity and mergers and acquisitions, first as a partner at international firms Jones Day and Ropes & Gray and later, at a local New Orleans firm.

A true gentleman, Sandy was a loving husband and father, a talented athlete, gifted musician and brilliant legal mind. He was accomplished and highly successful in both his professional career and personal endeavors, yet he remained a man of integrity, humble and unassuming throughout his life.

A delightful raconteur, his joie de vivre, unfailing generosity and unique mix of wit, irreverence, depth and compassion touched the lives of many. He will live on in the hearts and minds of his devoted friends and family.

The family wishes to express sincere thanks to the doctors and caregivers that aided Sandy in the last years of his life.

Relatives and friends are invited to attend a visitation at 10:15 a.m., Saturday, April 28 at Trinity Episcopal Church, 1329 Jackson Ave., New Orleans. A memorial service will be held at the Church beginning at 11 a.m.

A private tribute will be held in Manhattan as well as an interment service at St. Luke’s Episcopal Church in Darien at a later date.

In lieu of flowers, memorial gifts may be made to the music department of Trinity Episcopal School or the Louise S. McGehee School, both of New Orleans; Metairie Park Country Day School of Metairie, LA; or the Warren Fox Kaynor Technical High School in Waterbury.

To view and sign the guestbook, visit this Web page on the Lake Lawn Metairie Funeral Home and Cemeteries website.

Editor’s note: There is also a guestbook on this Web page, linked to the New Orleans Advocate obituary (where the black and white picture, above, was published). That guestbook will remain until May 23. None of the links in this article were in the funeral home’s obituary; they were added by Darienite.com.