The so-called “last mile” of Interstate 95 in Westchester County nearest to Connecticut will undergo a massive “reconstruction” including road-widening, bridge replacements and other changes that can slow traffic into 2021, New York state officials have announced.

The project, which officially started this week, is expected to result in more than just lane closures, according to a news release from the New York State Thruway Authority.

Expect more than just lane closures, according to the announcement: “During construction, motorists should expect traffic shifts, detours and temporary traffic stops. Motorists are urged to be alert and follow the posted work zone speed limits.”

The budget for the entire project is $135 million.

When complete, the exit ramp to Interstate 287 (the Cross-Westchester Expressway) should be widened to two lanes, Interstate 95 should have more and updated guardrails, wider shoulders and other added safety features, and various bridges will be rehabilitated. (See the list at the bottom of this article.)

Timing: Now Through 2021 (Nothing More Specific)

The project was scheduled to begin earlier this week with work starting on the Grace Church Bridge, which goes over I-95 just east of Exit 21 (which leads to Midland Avenue in Rye, N.Y. and Interstate 287, the Cross-Westchester Expressway).

An onramp from Midland Avenue to Interstate 95 North is expected to be closed, according to the announcement, “for the majority of the project. A detour route has been developed and will be displayed with roadway signage.”

Next week, “reconstruction” work is expected to start on the I-95 right shoulders and shoulders abutting the median strip of the highway (both north and south lanes). Expect temporary pavement on the shoulders for a while, according to the project website. 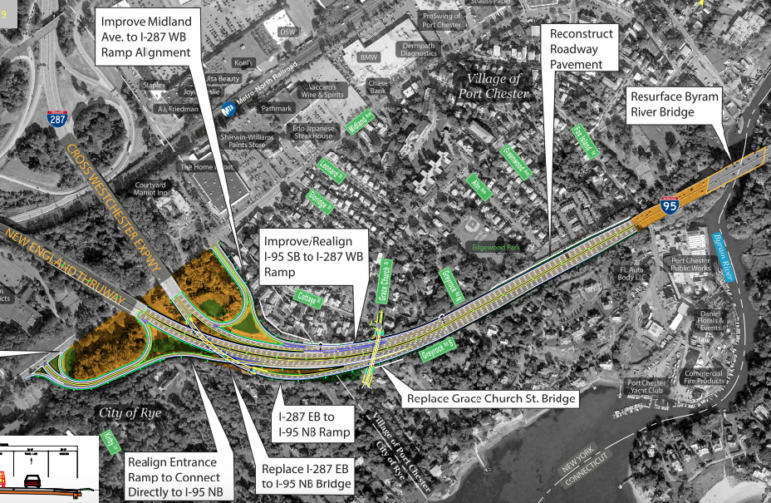 Part of a map showing highway work and on the Last Mile of I-95. The Connecticut border is on the right (with a Byram River label in blue).

A spokeswoman for the Thruway Authority told Darienite.com on Friday afternoon that there is no more specific estimate for the end of the project than sometime in 2021. announcement nor the project website said when in 2021 the project is expected to be completed.

The best way to keep up to date on when the project may be completed, along with other information on the project, is to monitor the “Last Mile” project Web page, she said. 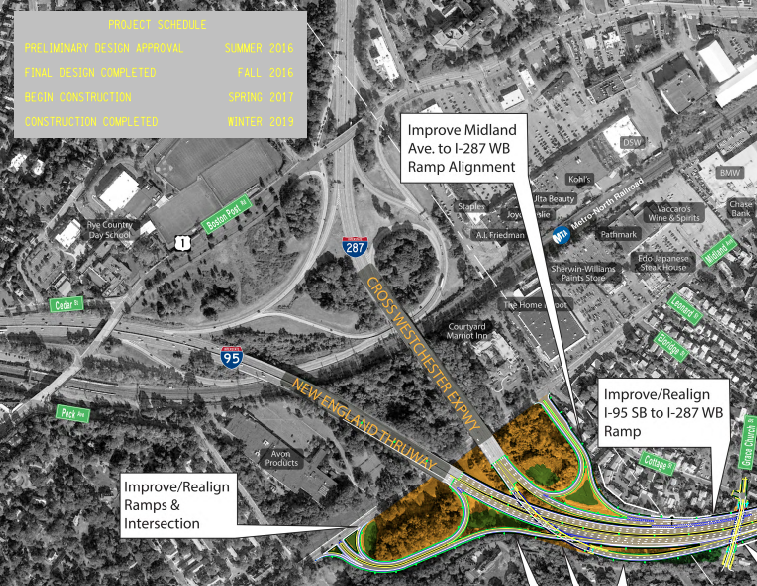 Much of the western end of the same map as above.

Traffic on some state and town roads in Greenwich will be increased and changed as a result of the Midland Avenue exit being closed, a Greenwich official told GreenwichFreePress.com.

“We reached out to New York emergency services so we can develop contingency plans, because the Midland Ave. exit will be closed, and impact traffic going through Greewnich,” he said. “It’ll impact how we respond to incidents on I-95 and how we get back from them.”

This isn’t the only long-term project in the region that will disrupt traffic on Interstate 95 and other high-volume traffic corridors in the area. Some should be done within a fe months, three are due for completion in 2019. The Exit 9 project is not expected to result in long-term lane closures. Here’s a rundown:

—Nighttime Lane Closures on Merritt Parkway in Norwalk From Now to 2019 for Bridge Project (April 29) COMPLETION DATE: May 13, 2019

—Bridge Replacement Project over Noroton River (June 18) expected to result in one lane closed and to start this November. COMPLETION DATE: NOVEMBER 2021

Reason for the Project

In recent years, work on the 15-mile stretch of Interstate 95 from the Bronx to New York state Exit 22, about a mile from Connecticut, has been completed, with the stretch that New York state officials call “the last mile” the last part of the highway to undergo similar upgrades, according to a New York State Thruway Authority news release.

“This current project focuses on the final one-mile stretch from Exit 22 (Port Chester – Rye- Midland Avenue) to the Connecticut state line, which more than 140,000 motorists travel every day,” the news release said.

The project is meant to make the road safer and cut down on noise pollution, said Matthew Driscoll, acting executive director of the Thruway Authority in a news release.

“This comprehensive project will benefit the thousands of motorists who travel this stretch of I-95 every day and improve the quality of life for residents who live nearby, bringing the roadway to modern standards and increasing safety,” Driscoll said.

Two New York state legislators were quoted in the announcement giving support for the project:

Assemblyman Steve Otis said, “The Thruway Authority is about to undertake the large and necessary ‘Last Mile’ project to address safety issues at the I-95/I-287 merge to the Connecticut border.

To Stay Informed About the Project and Its Traffic Impacts

If it’s important enough to you, you can keep up with the project and possibly anticipate traffic slowdowns in these ways:

What $135M Gets You in Rehabing a Highway

I-95 Reconstruction
The project includes reconstruction of the I-95 mainline (milepost 14.1 to milepost 15.0) along with safety upgrades including wider shoulders, updated pavement markings and the installation of guiderails and barriers. All three lanes on I-95 in both directions will be reconstructed.

Ramp Upgrades
The area contains a six-ramp interchange system with the Cross Westchester Expressway (I-287) and Midland Avenue in the City of Rye and Village of Port Chester.
Several ramps will be upgraded and reconfigured to improve traffic flow.
Work includes:

Bridge Replacement and Rehabilitation
The project also includes work on several bridges, which will be replaced or rehabilitated.

Editor’s note: Information from a New York State Thruway Authority spokeswoman about the timing of the end of the project was added to the article at 12:41 p.m., Friday.