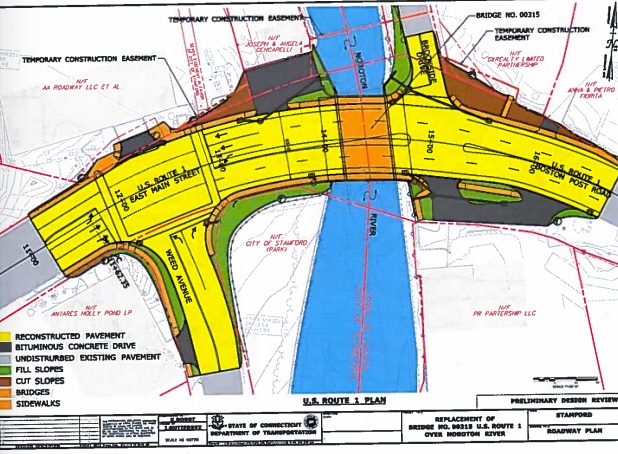 A map from a state Department of Transportation document posted in 2014 on the Darien town government website showing the extent of the project.

A planned project to replace the Noroton River Bridge, already discussed for years, now has state and federal financing, a contractor and a plan for three years of work, from November of this year to November 2021.

It might well not last that long. A consultant who described the four-phase project said Phase II will only last a day or so, and the other three phases are expected to last between nine and 12 months apiece, which could mean the project might be done months earlier than three years. Unpredicted delays can also occur.

That was part of the description given to Darien and Stamford officials at a meeting last Tuesday, June 12 at Stamford Government Center. One of the first steps will be moving overhead utility lines. Heavy construction work is expected to start next spring.

However, according to one of the slides in the presentation, “Night work will be permited for limited activities from Sunday through Thursday, 10 p.m. to 6 a.m.

“Contractor will not be allowed to interfere with traffic operations during peak hours 6 a.m. to 9 a.m. and 3 p.m. to 6 p.m.)

From this November until spring 2019, work will start on moving multiple utility lines, overhead and underground. At some point, a gas main line running along the south side of the bridge will be shut down and gas service will go through other lines.

In the spring, a construction company will start building a temporary bridge on the north side of the present bridge. Sewage lines are not affected, but two water mains will be moved, as will an underground line for Frontier Communications.

Drivers who get past the bridge as they head west will face a second, bigger construction project replacing the Route 1 bridge over Interstate 95. (Darienite will publish an article about that project, which was described in the same meeting, later.)

A map from a state Department of Transportation document posted in 2014 on the Darien town government website showing the extent of the project. A similar map shown during the presentation appeared to have no major differences with this one.

One lane of traffic will remain open on the bridge, and two more will flow over the temporary bridge as construction takes place. For about a day, the entire length of Phase II of the project, there will be only one lane in either direction.

Darien Police Capt. Don Anderson was also at the meeting (as was Public Works Director Edward Gentile Jr.). Anderson said that at previous meetings it was pointed out that Stamford has three nearby intersections near the bridge where heavier traffic might become worse if there were only one eastbound lane open on the bridge, and that was why the plan had been to have the third lane regularly used for eastbound traffic.

As of 2014, when traffic at the bridge was last counted, there were 10,500 vehicles a day traveling over it, and the state Department of Transportation is estimating that roughly the same number go over it nowadays.

Residents of Brookside Drive, a private road, will need to use Anthony Lane to drive to and from their homes, because the entrance at the Post Road will be blocked during construction for all or nearly all of the three years of the project, said one of the consultants, Justine Ziobron, a public engineer with BL Companies, who gave almost the entire presentation about the project to town officials.

The contractor will not be allowed to use Brookside Drive to access the project. All access will be through Route 1.

The current bridge, built in 1913, according to Ziobron, was given an addition on the north side in 1956 after heavy flooding the previous October damaged the structure. The original bridge was also rehabilitated at that time.

The bridge has deteriorated to the point where concrete has cracked and steel has been exposed, Ziobron said. A parapet on the south side, forming a wall between the sidewalk and the river below, fell off. Since then, the sidewalk has been closed.

The project will encompass about 800 feet of roadway along Route 1, and over the bridge itself, the roadway will be 2.5 feet higher than before. That was for “hydraulic” reasons Ziobron said, perhaps referring to a desire to let more water pass under the bridge if the Noroton River ever again floods as badly as it did in 1955.

This video, which runs just over an hour, starts off with a short interview with Ziobron and a state Transportation Department official, followed by the meeting between officials. The first half hour or so of the meeting focuses on the Route 1 bridge over I-95 at Exit 9 — we’ll follow up with an article about that project soon.

The second half hour is a description of the Noroton Bridge project, where much of the information from the beginning is repeated and new details are provided. The last several minutes repeat, although the audio is clearer.

The bridge will be a bit wider than it is now, and it will have sidewalks on both sides, Ziobron said. The bridge will remain 50 feet long and will be widened several feet to 70 feet wide.

When construction is complete, the span will have the same four lanes it has now and continue to have a fifth lane for left turns onto Weed Avenue on the Stamford side. The new feature of the wider bridge will be five foot shoulders on both sides of the lanes.

The project is expected to cost between $8 million and $9 million, with 80 percent of the funding coming from the federal government and the rest from the state. The money has all been approved, a state transportation official told the local officials.

One thought on “Rt. 1 Noroton River Bridge Replacement Project to Last 3 Years, With Only 3 Traffic Lanes”