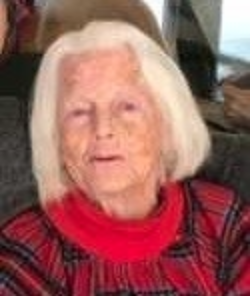 Born in Brooklyn, NY, on March 9, 1924, the daughter of Louis and Phyllis (Kerr) Arata, Justine spent her formative years in Old Greenwich. She graduated in 1943 from Harcum Junior College where she majored in interior design.

On Sept. 11 of the same year, Justine and Sanford “Sam” Robinson, of Greenwich, Connecticut, were married. Sam predeceased her in 2003.

— This obituary previously was published by the Barre Montpelier Times Argus

During World War II, Justine held a wartime factory job and was an aircraft spotter. She and her family moved to Williamstown, MA in 1944, so Sam completed his studies at Williams College. They soon moved to Darien, where she volunteered at Stamford Hospital and a Red Cross Children’s Group.

In addition, she was a Girl Scout leader, a member of the Junior League and the Stamford Museum, where they performed puppet shows for children. She and her best friend, Edith Lamb, helped in the creation of the Darien Historical Society.

In 1967, the family made the big move to an old farm in West Brookfield, VT, where they gardened and raised sheep and a couple of horses. Justine resumed her volunteer activities as a storyteller at the Northfield Public Library; was a member of the Randolph Garden Club; a member of the local planning board; and a volunteer at the Mayo Nursing Home in Northfield, VT.

Justine also was active in setting up the Vermont Quilt Festival which was then held in Northfield. After her husband’s death in 2003, Justine moved to Montpelier where she continued to volunteer at the Senior Citizens Center.

Her family and friends will remember Justine as a lover of nature and a creative, talented person who hooked rugs, spun her own wool and made beautiful blankets and clothing. She was a collector of antiques and carried on her WWII trait of letting nothing go to waste.

Justine’s charismatic personality, generosity and humorous demeanor will be missed by all who knew her.

Donations in her memory may be made to charities of your choice.