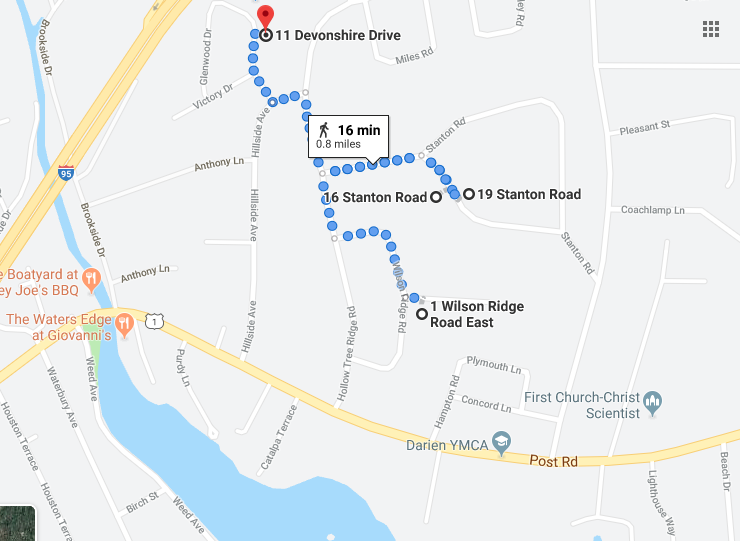 This map shows all four locations where cars were entered. (Ignore the blue dots — the path between them is unknown.)

From Sunday night to Monday morning, Aug. 11 to 12, unlocked cars parked outside overnight at homes on various streets near the southern end of Hollow Tree Ridge Road (south of Interstate 95) were entered, police said.

One car, left not only unlocked but with the keys inside, was stolen from Wilson Ridge Road East. The car was found by Norwalk police several days later, so damaged that it couldn’t be driven.

This map shows all four locations where cars were entered. (Ignore the blue dots — the path between them is unknown.) The incidents might have happened in any order during the overnight period.

Here’s how police described the five incidents discovered on Monday and in which every single one of the vehicles was left unlocked (times given are when police found out about each incident; the exact times of the incidents are unknown):

6:36 a.m. — A 2013 Honda Civic, unlocked and with the keys inside, was found missing, a complainant reported at this time.

On Friday, Aug. 16, Norwalk police informed Darien police that the vehicle was found in that city, but damaged so badly that it couldn’t be driven. Darien police detectives went to the car to process it for evidence.

2:17 p.m. — The contents of the glove compartment of a 2016 Lexus RX were found strewn on the front passenger seat. Nothing seemed to be missing, the owner told police.

2:42 p.m. — Police looking into the vehicle entry at 19 Stanton Road canvassed the neighborhood and saw a 2014 Ford Mustang in the driveway at this address with the door slightly ajar.

The contents of the glove compartment were strewn on the front seat. The owner said nothing appeared to be missing.

6:11 p.m. — Police were told that someone entered a man’s unlocked 2016 Subaru Outback. At 2 p.m., the owner found the driver’s door ajar and the center console open. An Apple iPod valued at $300 was missing.

Other, recent articles about motor vehicles entered in Darien: