Trying to find the young thieves who visit town to enter unlocked vehicles overnight, — stealing from some of them and, when the keys are left inside, sometimes stealing the cars themselves — is like looking for a needle in a haystack for police, a Darien police captain recently told the Board of Selectmen. 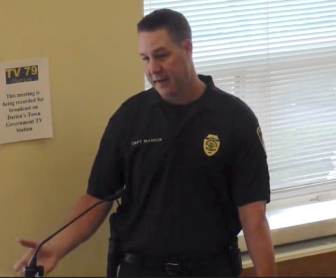 Image from the Darien TV79 video of the meetingt

Darien P.D. Capt. Jeremiah Marron speaking to the Board of Selectmen about thieves entering cars in town.

For the patrol officers on the night shift, there aren’t predictable places to look for the thieves, Marron said. “It’s all over town — it’s not just the borders, it’s not the dead-end roads. It’s just all over, so there’s no real prediction ability there,” Capt. Jeremiah Marron said.

There are more reports of unlocked vehicles being entered in the warmer weather, he said.

Combatting the crime is a priority, Marron said: “[For] our midnight shift, other than public safety [in general], it’s the top priority to try to be on top of this.” But he added: “It’s a needle-in-a-haystack type of thing — you can’t be in every neighborhood at all times.

“A lot of these suspects are on foot, hiding in the woods, hiding between cars, driving with their headlights off — in stolen cars, already,” so they’re hard to spot even when police are driving by, he said.

“But I am happy to say that our Detective Division, as busy as they are, have had some success with the followup investigations and the making of arrests,” he said.

Marron delivered the Police Department’s quarterly report at the meeting late last month between heads of town departments and the Board of Selectmen.

“We’ve had […] our biggest level of success on or followup investigations — just networking with other [police] agencies. We’ll get occasions where other agencies will make arrests, and most of the time it’s juveniles, and those juveniles are willing to speak to the agencies that have them in custody,” he said.

“They kind of give or forecast information that may be beneficial to us — where they’re saying ‘Thursday night is the night that the kids are coming down from Hartford to look for cars in Greenwich, Darien and New Canaan,'” he said. That can help patrol officers be more watchful on a particular night, he said.

Marron was asked by Selectman Susan Marks about people who report incidents to police after failing to lock their cars: “Does it faze them at all — what are they not getting?”

“Faze them? No,” Marron said. “And that’s the disturbing part.” And a lot of the incidents, he added, are from police canvassing neighborhoods after one report, only to find several others, oftentimes, from people who spoke to police only after an officer knocked on their door, sometimes after spotting a car with an open door.

You can see Marron’s 4 1/2-minute discussion with selectman about thieves entering unlocked vehicles on this Darien TV79 video, from time stamps 1:14:35 to 1:19:00:

First Selectman Jayme Stevenson had other questions for Marron about the phenomenon.

“So I know it’s an issue in all communities,” she said. “What’s your sense in teerms of, sort of like, per capita — are we the norm?”

“I have a feeling that, per capita, our stolen car rate is a lot higher than some of the other towns. So that means more keys are being left in cars. And what people don’t realize sometimes is some of the higher-end vehicles which we see in town here, when the cars are locked, their mirrors fold in.

“So at night, when you’re driving around and you see a higher-end vehicle with the mirrors out — that’s an indicator to these suspects that the cars already are unlocked.”

Most of these cars use key fobs to allow the cars to start, and many people, for the sake of convenience, just leave the fobs in the car. “When they wake up, their car is gone and involved in robberies, [police] pursuits and a lot heavier degrees of crimes in other cities,” he said. “So it’s challenging for the whole area.”

Marron didn’t mention it, but some police announcements about car thefts have mentioned stolen vehicles from Darien found parked in another community, usually a city in Connecticut. In more than one case, Darien police detectives have gone to the scene to “process” the car, looking for fingerprints or other evidence the thieves may have left behind.

Overall, Marron said, the detectives’ successes give “hope that that’s a deterrent on its own, and we can show that a town like Darien will invest its time in investigations, and maybe it’s not the best town to come to to commit these types of crimes.”