Whole Foods supermarket management has decided it would welcome Darien Farmers Market if the vendors want to move there, and town officials will allow it. The CEO of the company that owns Goodwives Shopping Center, however, says his company would like to see the Farmers Market stay there.

On Monday, the Darien Planning & Zoning Commission heard a request for a permit to allow the Farmers Market to move to the part of Whole Foods parking lot that’s closer to the Post Road. 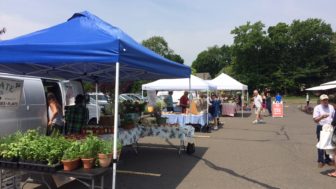 The commission granted approval in a unanimous vote. Commissioners said the new location didn’t seem likely to harm anyone — neighbors shouldn’t be affected, there seemed to be enough parking and the move wouldn’t take place unless Whole Foods and the vendors thought it was to their advantage.

The one exception to the no-harm conclusion was just before Thanksgiving: That’s the busiest or one of the busiest times of the year for food buying, commissioners said, when supermarket parking lots can be full even without farmers markets.

The commission forbade holding the farmers market at Whole Foods on the week of Thanksgiving. Under the current schedule, at Goodwives, the market would end the day before Thanksgiving, and if the market stays there, that won’t change.

The next move is up to the vendors in the Farmers Market. It’s possible they will decide to move before the end of the 2019 season, move next year or not move at all, Planning Director Jeremy Ginsberg told the commission.

“I think there’s a possibility that they might stay where they are,” Ginsberg said. “They’re looking for flexibility.”

The initiative to change locations came from the vendors, not from dissatisfaction from the management of Goodwives Shopping Center, which is owned by Urstadt Biddle, Ginsberg told the commission on Monday.

Ginsberg and the commission members were reluctant at Monday’s meeting to go into details, but a source told Darienite.com that there was some friction between the vendors and the management of at least one of the stores in the shopping center.

The vendors, who are in the shopping center parking lot from 10 a.m. to 3 p.m., use bathrooms of at least one store there, and some of what they sell competes, to some degree, with some things sold elsewhere in the plaza.

Whole Foods management was concerned about traffic and parking in the lot, but after looking into it, the company told town officials that it was in favor of the move.

You can watch the video of the P&Z Commission meeting here. The discussion about the Farmer’s Market runs from about time stamps 35:49 to 44:27:

During the July 1 meeting, Commission Chairman John Sini suggested that both Urstadt Biddle and the Farmers Market vendors wanted the move.

On Monday, Ginsberg said the vendors may decide not to move, and the CEO of Urstadt Biddle wrote in an email on Tuesday, July 30 that his company didn’t want the move at all. The email was sent a day after the P&Z Commission voted to allow the move.

The friction isn’t between Urstadt Biddle and the Farmers Market, according to Willing “Wing” Biddle, president and CEO of Urstadt Biddle Properties LLC. The Greenwich-based, public company, a real estate investment trust (also known as an REIT), owns Goodwives and other shopping centers in the New York metropolitan area.

“For the record, UBP [Urstadt Biddle Properties] is in favor of having the Farmers Market at Goodwives. Stop and Shop has been very cooperative about having them there, and the small shops like it. I’m not sure where the belief [cropped up] that UBP is not in favor of it, but that is incorrect.

“It would seem to me that it would be better for the town to keep the Farmers Market at Goodwives and not permit them to move to a location that the traffic they draw would be of little benefit to other stores in Darien. We want Goodwives to be the town center for convenience and grocery shopping, and having the Farmers Market helps that effort.

“Stop and Shop is shortly commencing a major renovation, showing their commitment to the site. We continue to strive to bring good tenants in to be a part of the mix. Retail is a tough business these days, and I would hate to see traffic diverted from Goodwives, which we have all worked so hard to improve.”

Ginsberg told commissioners that the owners of both Palmers Market and the next-door Noroton Heights Shopping Center have an interest in hosting a farmers market in that area, and Sini said that “based on conversations we’ve had with the Corbin District” the developer of that approved project in downtown Darien has expressed interest in having the Farmers Market relocate there.

“Actually, Greg Palmer [an official of both Palmer’s and the Noroton Heights Shopping Center] sent an email earlier — maybe once of those projects are done you have something popping up there.”

Sini pointed out on Monday that with the Corbin District project probably two or three years from completion, the Whole Foods site was a spot he thought of as a temporary location for the vendors if they leave Goodwives. The commission’s permit approval was for two years (through 2021), after which an extension would be needed.