Did you ever wonder what it would be like to work for the railroad?

That’s what Paul Holland did for 39 years, first with Amtrak, later with Conrail and finally as a conductor on Metro-North. His self-published “My Life As A Rear End” pays tribute to his time in cabooses, but it’s his commuter rail stories that kept me laughing.

Like the colorful crowd from the psychiatric hospital on the Harlem line who would escape — often in their pajamas — and ride his trains, obviously unable to pay. Or the many times he was assaulted by knife-wielding thugs only to be rescued by his 6-foot-7-inch cross-dressing frequent rider “Rocky.”

Over the years, Holland collected his stories, often scribbling them on seat checks. Upon his retirement it took him less than a year to pen his “memoirs,” many of which are far too racy to mention in this column. Let’s just say that the diminutive conductor was very popular with the ladies. It must have been the uniform.

Because he truly loved his job and had three kids bound for college, Holland worked six or seven days a week. Railroad conductors can work split shifts of up to 16 hours a day, and with his overtime, Holland averaged about 80 hours a week. 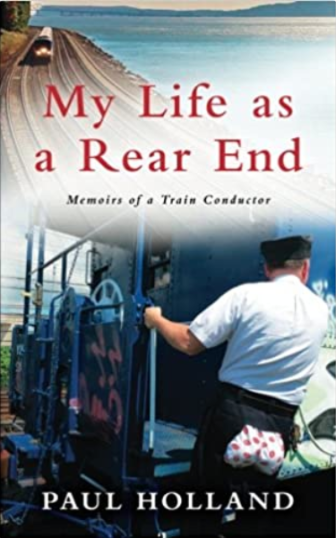 Some passengers would ask him the stupidest questions, like the riders who would congregate in the front car for a fast exit at Grand Central Terminal. A common query: Why can’t you add more cars to the front of the train?

Occasionally, Holland would work the last train to depart Grand Central at 1 a.m., making all local stops to New Haven, affectionately known as “The Vomit Comet.” It was a quiet run, though getting inebriated passengers off at their correct stop was always a challenge.

He also tells the story of the German tourist who had parked his friend’s borrowed car at a remote station, returning late at night to find it had been stripped of all four wheels. He thought it was the local cops penalizing him for parking without a permit.

Enforcing the rules in the quiet car was a thankless job, like the time a passenger complained about another rider eating a smelly egg salad sandwich. Not a violation, ruled Holland.

Or the passenger angry about the woman in the quiet car talking, albeit quietly, on her cellphone.

“Tell her to shut the F up,” said the vigilante. As Holland approached the woman, he heard her say “Have a blessed Easter” before hanging up. Holland returned to the complainant and said, “She’s a nun, but I’ll relay your message.”

As he turned to approach the woman again, the now-penitent passenger raced after him to say “never mind.” Holland said, “He must have gone to Catholic school.”

Holland insists all his stories are true. “I have witnesses,” he told me.

Retired and living New Milford, Holland obviously misses his job and his passengers, some of whom he still keeps in touch with. He says that over the years passengers have changed.

“These days they don’t seem to show any respect (for authority), especially the kids.”

As “the face of the railroad,” Holland says he never minded facing angry passengers upset about delays.

“I just always told them the truth and treated them the way I’d want to be treated.”