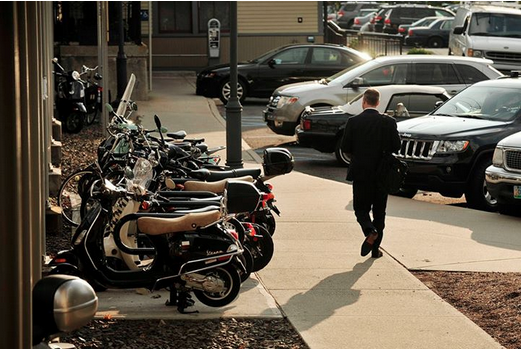 An announcement from the Darien Police Department:

Recently Darien Police officers recovered a stolen scooter as a result of a motor vehicle stop.  The scooter had never been reported stolen but through the officer’s investigation, it was determined that it was taken from the Darien train station approximately two years prior. 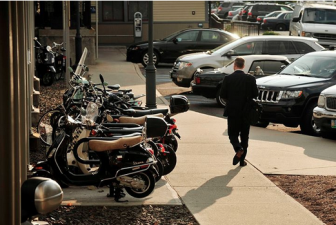 Scooters are being stolen at an alarming rate in our area and in the surrounding communities.  Many thefts are from train station parking lots and other commercial areas.

A thief can steal your scooter in less than 20 seconds!  Alarmingly, many owners do not lock or secure their scooters thereby presenting opportunistic theft.

However, as with any vehicle, it’s always important to take the time to properly lock your scooter to protect against theft and prevent this crime from reoccurring.

Here are some tips to prevent you from becoming the next victim:

The less your scooter is seen, the less likely a thief will target it. If possible, keep it covered. Not knowing what’s underneath makes it harder to assess the difficulty of stealing it, or even to know if it’s even a vehicle they want.

Although readily defeated, your scooter’s steering lock (if equipped) can be a first-step defense and will discourage easy maneuvering of it away from where you left it.  It is even more useful if your ignition and steering locks are separate, so the thief needs to defeat two locks to escape with your scooter. Many local scooters have been stolen because they are left unsecured and ONLY used an ignition lock.

It’s best to use two or more locks of different types in addition to your scooter’s built-in lock(s). Unless a thief has conducted surveillance on your scooter, he probably won’t be prepared to tackle different kinds of locks. If one of them anchors the scooter to something immovable, it is unlikely that someone can carry it off.

Whatever lock you use, don’t rest it on the ground where the thief is more likely to be able to get enough leverage to break it. If you attach the lock up and away from the ground, the thief probably won’t get that extra leverage to pry the lock. The lock should be attached through the frame, or less desirably through the forks or wheel. When using a chain lock remove as much slack from the chain as possible and always secure locks with the key hole pointing down. This reduces access to lock pickers and also cuts down on the amount of leverage a would-be thief can gain to break your lock.

A disc lock might inconvenience joy-riders, but determined thieves can simply hoist the scooter into a waiting truck. If you add a cable to it and anchor that to something solid, you have a more formidable obstacle. Even scooters inside garages should be securely locked.

Go for the good stuff when shopping for security: Alarmed disc locks, U-locks of hardened steel and asymmetrical chains (5/8 inches or greater) all rate highly.

If you’re really determined to foil the bad guys, wire up a kill-switch or spring-loaded switch that must be held down when the start button is depressed. Some owners have foiled attempted thefts by simply removing the main fuse when they parked their scooters.

If you park outside, choose a well-lit, conspicuous area. If you can’t lock your scooter to something solid and stationary, try another scooter (preferably not one belonging to a stranger). Even plastering your scooter with “Alarm Installed” stickers could discourage thieves.

Professional thieves often find the scooters they want to steal (probably because they have orders for them) by following them to where they are parked during the day or night. Then they size up the situation and come back with what they need to steal the vehicle. So, as you approach your destination, especially if it’s your home, watch your mirrors for several blocks.  If someone seems to be following you, try to lose them, pull over and let them pass, make a U-turn, or go around the block. Anyone who continues to follow you is probably trouble so lastly…

Report suspicious activity to Law Enforcement immediately and provide as much descriptive information as is possible.  Keep emergency numbers either programmed into your phone or readily accessible. Never leave your keys in the scooter while it is unattended. Park your scooter in well-lit and highly visible areas. Keep a record of descriptive information about your scooter such as Vehicle Identification Number (VIN), license plate number (if applicable), make, model, color, and unique characteristics.

If you observe unusual activity, try to remember details as best you can, for example, what a person was wearing or any other identifiers like scars, tattoos or shoes.

Always report the theft of a scooter to the police department in the jurisdiction from which it was taken.  This significantly increases the chance of its recovery and will help combat this ongoing problem.  Please always be aware of your surroundings, avoid walking alone at night, and notify Law Enforcement immediately if you observe potentially dangerous situations or individuals.

One thought on “How to Avoid LosingYour Scooter to a Thief: Darien Police Tips”