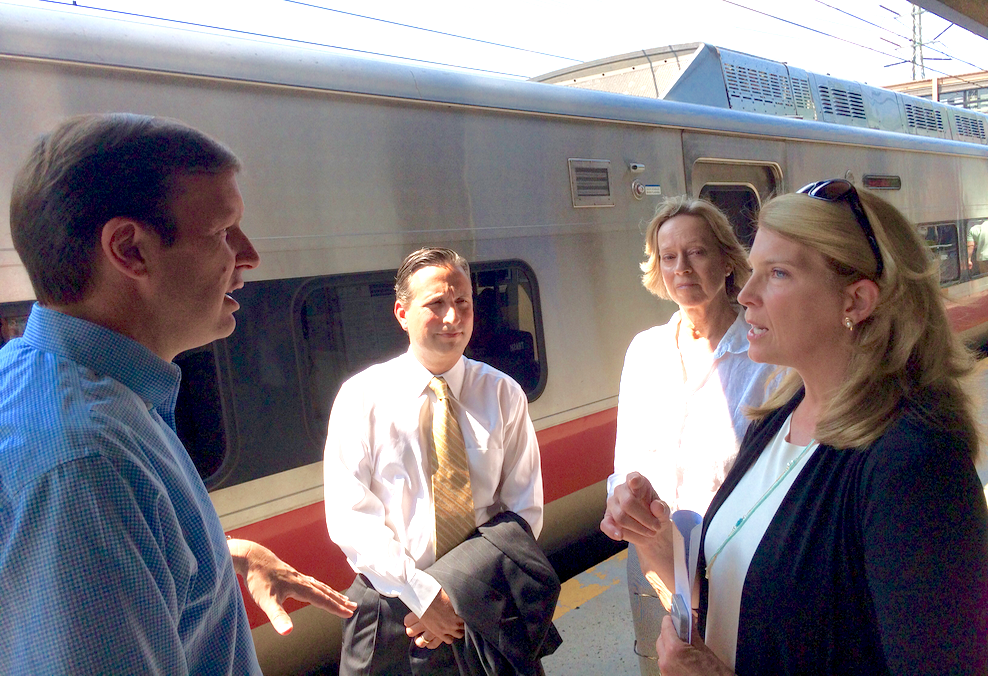 U.S. Sen. Chris Murphy visited Noroton Heights Railroad Station on Tuesday to learn about town officials’ hopes to replace much of it at about the same time that the Noroton Heights business district is rebuilt. 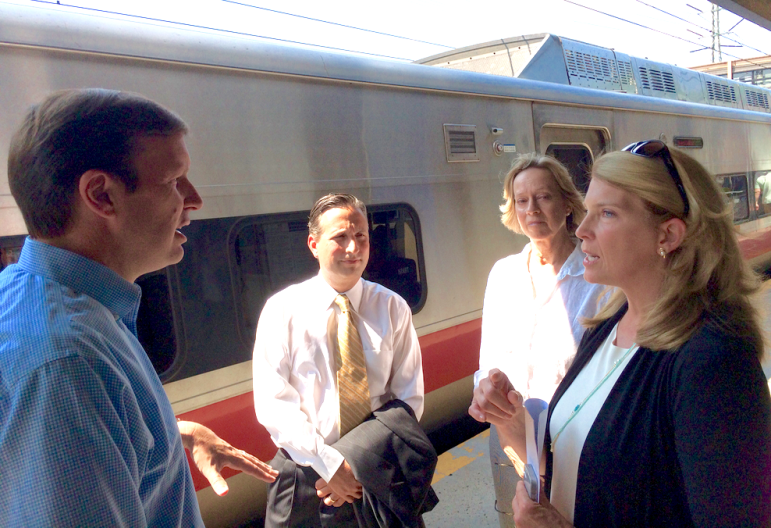 First Selectman Jayme Stevenson gave Murphy a brief tour of the north side of the station, accompanied by state Sen. Bob Duff and state Rep. Terri Wood. All said they’d like to see state and federal money used to help reconstruct the station.

Stevenson said the town was willing to chip in if there was a partnership between other levels of government and some of the developers who want to replace much of the commercial district.

The plexiglas shelter at the station needs to be expanded or replaced with a structure that can hold many more commuters on cold winter mornings, Stevenson said.

She told Murphy that a complete redesign “of the station building” would be a good idea.

“What station building?” he said while standing by the plexiglas structure.

The platform should be lengthened and the walkway over the tracks needs to be replaced or repaired with a structure that doesn’t leak, get ice in it in the winter, she said. If the platform is replaced, it would be a good time to replace the railings and light posts at the station, too, she said. 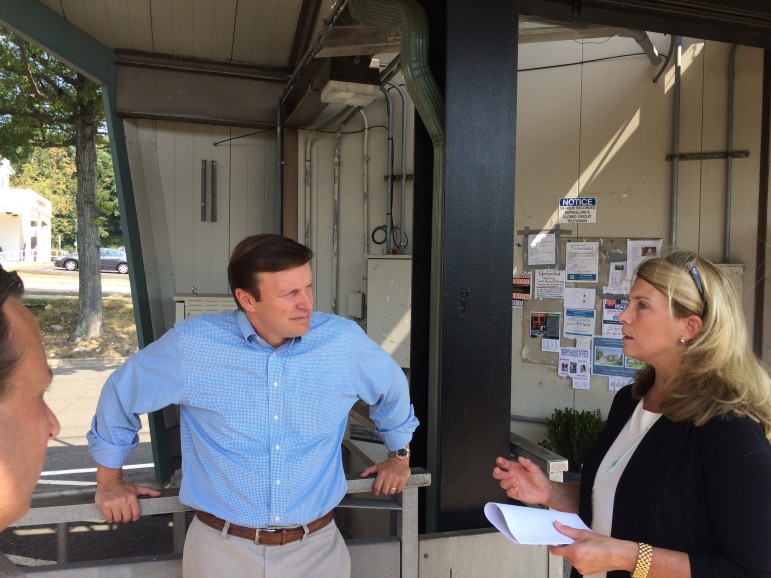 Murphy talking with Stevenson, who pointed out the exposed wiring that can be seen behind and above him in this picture.

Some wiring is exposed at the western end of the plexiglas shelter and could be covered as part of a renovation, Stevenson pointed out to Murphy. “This station needs attention,” she said.

The walkway and shelter should both be compliant with the American Disabilities Act, she added — in other words, people with handicaps need to be able to get into them. Stevenson said she’d asked the state to hold off on expanding the canopy over the platform on the north (New York City-bound) side in order to extend it as part of a larger refurbishing of the station, perhaps after platforms and the walkway are replaced.

Developers are planning to tear down and replace most of the buildings in downtown Noroton Heights, resulting in more people living off of Heights Road and on a four-acre tract just across Hollow Tree Ridge Road from the train station, Stevenson said. “We’re hoping this will be a huge draw for young professionals,” she said.

Federal Realty, a major national company, has bought about 9 acres on the eastern end of Heights Road, for more than $40 million, and the Palmer family, owners of Palmer’s Market, is planning to tear down and rebuild Noroton Heights Shopping Center, a similar-sized tract to the west of the supermarket. The mixed-use developments (with stores and homes) should mean more use of the train station, she said.

Murphy asked whether developers were looking into office space for the area and pointed out that offices add to the tax base without adding to town spending on schools. Stevenson said each of the developers is looking into offices, and decisions on that will depend on how well the office-space real estate market is doing. “I’m not sure they’re convinced,” she said.

One concern about all the development possibilities in Noroton Heights and downtown Darien is the impact on roads that are already congested at times, especially when there’s an accident on Interstate 95, but even when there’s just congestion on the highway.

In downtown Noroton Heights, traffic to the shopping area is compounded by traffic coming in from Stamford and New Canaan, along with traffic in and out of Middlesex Middle School, nearby, when the school day begins and ends, Stevenson said.

One problem with the overcrowding on Interstate 95, particularly when an accident or congestion clogs that highway, is that the Post Road in Darien gets clogged by drivers who “are not stopping to have dinner; they’re not stopping at our shops,” hurting local businesses, she said.

The town recently received a $250,000 grant to study transportation to and from the train stations, she said.

Murphy asked about what money is available at the state level to improve the station. State Sen. Bob Duff said the state has set aside money for train stations statewide, and decisions haven’t yet been made on where to spend it.

On the federal level, Murphy said, “We’re debating federal transportation funding, but as we speak, there’s a big debate on what proportion of it goes to mass transit.” He and U.S. Sen. Richard Blumenthal of Connecticut voted against the Senate transportation bill because it didn’t support enough funding for railroads.

With the U.S. House of Representatives passing a different transportation funding bill, the subject is expected to go back to the Senate for a vote after the House and Senate negotiate a reconciliation, he said.

“We’re spending as a country about 2 percent of our overall GDP [on transportation infrastructure],” Murphy said. “Europe is spending about 6 to 7 percent, China about 12 percent of their JDP on their transportation infrastructure. In Europe, they’re getting their results — you can get anywhere on a high-speed train. Here, you can’t get anywhere.”

Murphy said officials elsewhere in Connecticut have told him that if train service could be increased to every 20 to 30 minutes along the New Haven Line, people would be able to go to the station without bothering to check a schedule to catch a train.

“It’s not unreasonable to think this will turn into a subway-type service in terms of scheduling,” he said.

That could mean a significant further increase in ridership, he said. Ridership could also increase significantly in Darien and further up the line, especially in Bridgeport, if trains were even a bit faster, cutting the trip to New York City by perhaps 5 minutes from the current 50-55 minute trips from Darien, or cutting about 15 minutes from the Bridgeport-to-Grand Central trip, he said. When that happens, especially in Bridgeport, developers see more opportunities.

Murphy praised Stevenson for supporting a partnership between different levels of government and local developers to make transportation improvements: “We’d be fools not to take advantage of the vision you have to partner,” he told her.

Stevenson, a Republican who is up for re-election this year with three petition candidates but no Democratic candidate, returned the praise to Murphy (who isn’t up for re-election until 2018, if he chooses to run): “Thank you for fighting for Connecticut,” she said.

“Thank you for having this vision,” Murphy repeated back to her.