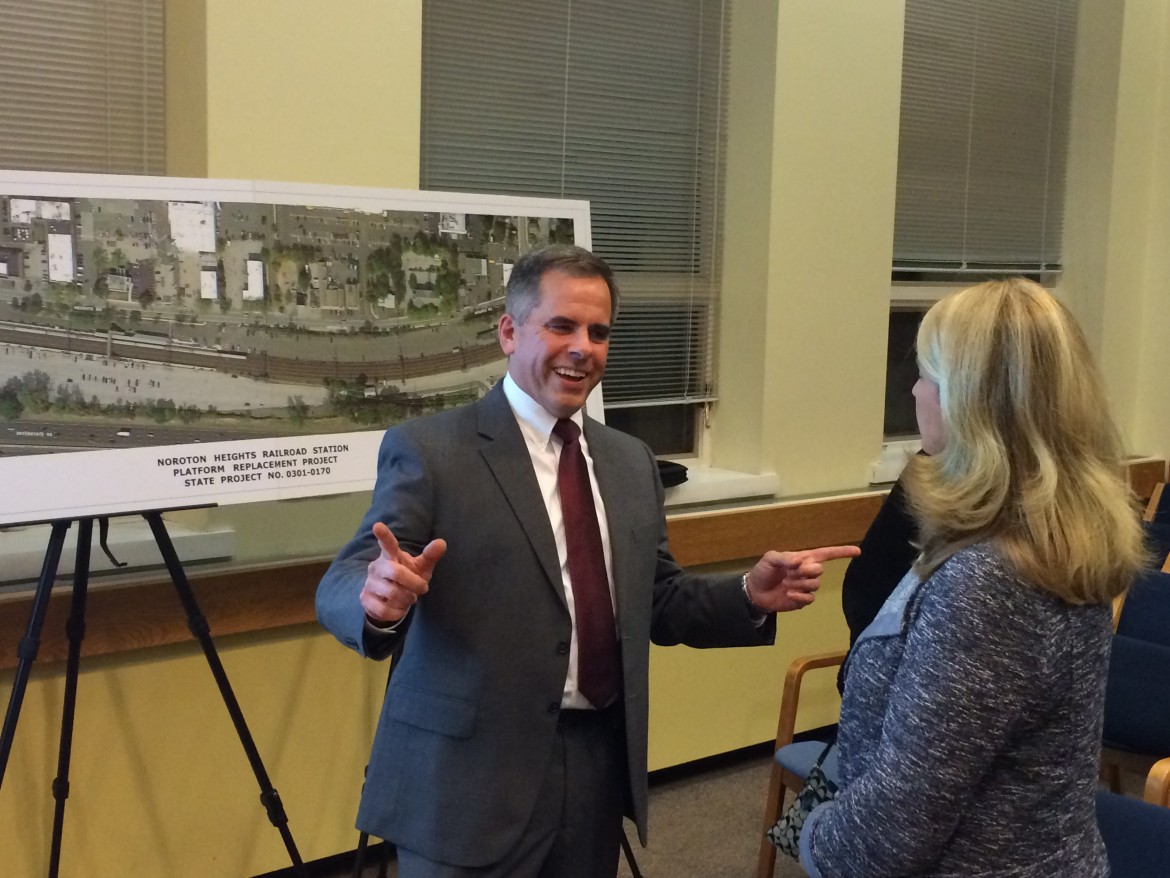 John Bernick, assistant rail administrator with the DOT, discussing how the state could cooperate with the town and commercial real estate businesses to improve the station

Connecticut Department of Transporation officials have one immediate goal in mind for the Noroton Heights Railroad Station — Replacing the concrete platform to keep the station safe for commuters in years to come.

When transportation officials visited the town to talk about that project, First Selectman Jayme Stevenson spoke with them with an additional goal in mind — to get support for replacing other parts of the station with improved structures.

The DOT’s goal is immediate and, well, concrete: The concrete platforms have been crumbling — and apparently deteriorating faster than those of most stations on the New Haven Line.

They also want to replace the roofed, three-sided shelter on the south side of the station with something larger if they can, and they’ll add some ramps compliant with the ADA — the Federal Americans with Disabilities Act — and replace some of the lamps and recycling bins. At a public meeting in Town Hall Wednesday, DOT officials explained their plans to replace the platforms in an $8 million-plus project that commuters will be walking and driving around from March 2016 through sometime “late in 2017.”

Stevenson has been talking up a more ambitious plan to replace the small Plexiglas/metal shed that serves as a station building and replace the overhead walkway that bridges the tracks with one that won’t leak water that turns to ice inside during the winter. She wants both structures to be ADA compliant, not just the concrete platform.

Stevenson also wants to coordinate access to the station with developers of the commercial district just north of the facility, on the other side of Heights Road. The developers will have entrances to parking lots and pathways at various points on Heights Road, and she’d like whatever sidewalks, driveway entrances or even routes for bicycles on the station side of the road to be a smooth transition.

A redevelopment of the station will take money and cooperation between developers, the town, the state, Metro-North and perhaps even the federal government, which hands out transportation grants.

And the stars may be in alignment to get such a project approved.

Two weeks ago, Stevenson hosted a visit by U.S. Sen. Chris Murphy to the station. She showed Murphy the deteriorated condition of the station, including not just the platform but exposed wiring, the lack of full access for handicapped riders and the meagre indoor space for commuters in cold or wet weather. Murphy agreed that the station has problems. He said that money may be available for partial funding, and he seemed interested in helping.

State Sen. Bob Duff, who represents part of Darien and who is the Majority Leader in the Democratic-dominated state Senate, and Terry Wood, a Republican state representative who represents most of the town, were also at the station with Stevenson and Murphy. The two state lawmakers also seemed interested in helping.

At last Wednesday’s DOT public meeting in Town Hall, several officials from the department showed up, and Stevenson spoke with most of them before and afterward, saying that she, the developers and other town officials were interested in improving the station. 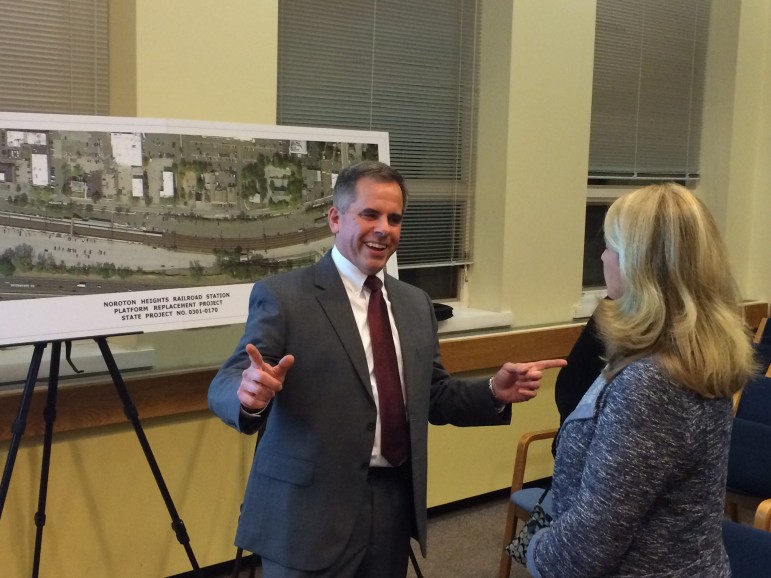 John Bernick, assistant rail administrator with the DOT, discussing how the state could cooperate with the town and commercial developers to improve the station.

She said developers across Heights Road were interested in coordinating their plans with any state plans for improvements, particularly regarding access, and those private developers were open to helping with a state redevelopment of the station, including perhaps paying for some of it.

Stevenson said she was optimistic the town might also finance part of a Noroton Heights station redevelopment, although she pointed out that she couldn’t speak for the whole town government, and she alone didn’t have the power to arrange the financing. (Metro-North Rail Road stations in Connecticut are owned by the state, which allows the towns to operate them.)

Gov. Dannel Malloy’s administration has increased funding for transportation projects and has strongly supported the idea of Transit Oriented Development in which new buildings for homes, stores and workplaces are built close to transportation centers like railroad stations.

That proximity cuts transportation times and allows for development without adding to (or adding as much to) traffic congestion: workers who take the train are on the roads less, as are local residents who walk or bike to a train station as an alternative to driving.

A state official told Stevenson after the meeting that anything to do with Transit Oriented Development will get the attention of state decisionmakers as they consider what transportation projects to fund.

As the town Planning and Zoning Commission gets formal proposals for redevelopment, they will get information from studies about the impact of that redevelopment on nearby traffic. Those applications will come from both Federal Realty (the owners of the land and buildings where Stop & Shop, Citibank and Equinox fitness club are located, along with some land and buildings close to Chase Bank) and the Palmer family (owners of not just the supermarket but the Noroton Heights Shopping Center to the west, extending to Hollow Tree Ridge Road).

The town also has a $250,000 state grant to study transportation to and from the train station.

State officials said that for the present, they want to get on with just the current project, mostly just replacing the concrete platforms. But that work wouldn’t preclude other improvements to the station, they said. Each 850-foot platform abuts the train tracks, and everything else at the station is either further to the north or south.

“We would like to have a discussion [with town officials] about what the master plan is [for the station], and maybe let that gel a bit so that we can see what can be phased in,” said John Bernick, assistant rail administrator for the department. “In the best of all possible worlds, we would want to improve the station.”

Asked by Selectman Susan Marks what he would recommend for how the town might move forward in getting approval and planning done as the first steps toward major improvements for the station, Bernick said, “I don’t know if I have a real solid answer for you right now, other than that we’re open to ideas.”

The town might get a grant related to studying transportation oriented development, he said. “That’s a start. That’s a source of funding you can use. […] We [the DOT] do have an ambitious budget, something we’ve never seen before, so we are quite busy. Partnerships with developers sometimes work quite well. Sometimes they [developers] can move faster than the state.”

Stevenson then said: “I think we have begun the discussion. I think I’ve spoken with John [Bernick] several times. I’ve spoken to the Commissioner [of Transportation James Redecker].”

In discussions after the meeting, Stevenson said the town is “willing to move forward with a preliminary design” for a station building to replace the shed.

Now is a great time to be planning major improvements for the station, Stevenson said, with developers planning to make their own improvements to nearby properties. Those development plans include the addition of housing units.

“To me there’s no better time to address the master plan [for the train station],” Stevenson told Darienite.com, “when we have these developments in design phase and we can coordinate the pedestrian and vehicular access — and by ‘pedestrian’ I mean pedestrians, bicyclists, scooters and all of that.”