Two Darien food-serving establishments got a “C” rating, the worst in the town A-B-C ratings system, in the latest health inspection reports released by the town Health Department. Three other establishments were rated “A”, and two “B.” 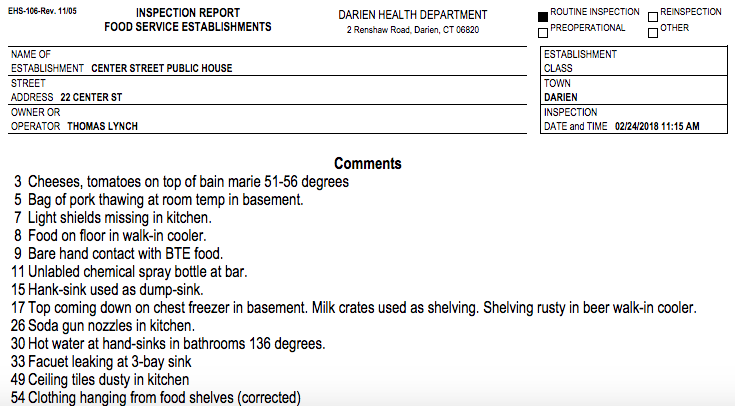 Town health inspector’s report for Center Street Public House on Feb. 24. (The inspector wrote out the report, which Darienite.com has quoted; the report as uploaded to the Health Dept. website may have slight wording differences.) 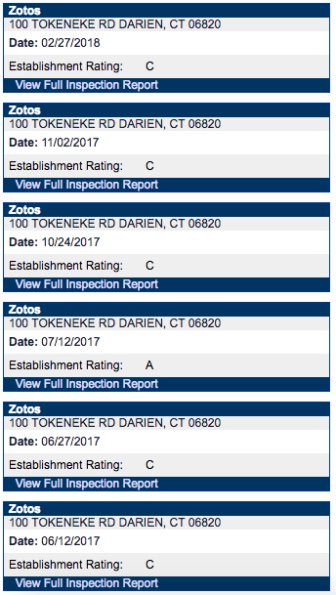 Zotos International has racked up an unusual number of “C” ratings — the worst — with “C” ratings in five of the last six inspections.

—Zotos International — 100 Tokeneke Road — Feb. 27 — Town Rating: C — State Score: 87 — Inspector’s Remarks: “Sliced ham in the lower hot-holding unit (turned off) at 130 to 132 degrees and cooked white rice on the counter at 100 degrees (no PH or time controls documented); grilled and blackened chicken at 66 and 71 degrees in the cold holding unit (cooked this morning). Grilled onions and cooked tofu at 49 and 54 degrees in the other cold holding unit on the service line; large sliced ham on the counter cooling (internal temperature near the bone was 2 degrees and outside layer was 122 degrees). Was this ham thawed and reheated properly?; employees must wash hands during task changes. Also, employee touched face with a gloved hand during service; misuse of sink: boiled eggs cooling in the three-bay [sink] and storing a large plastic tub in the hand sink near the sandwich station bain marie; inside of microwave and numerous utensils stored unclean: scoops, tongs, peeler and salad spinner; no soap at the hand sink on the line.” — Inspector’s Comments: “No disclosure or reminder statement on menu/placard serving raw fish. Salmon delivered today from Pagano’s (not frozen) and head chef is unsure if parasite destruction parameters have been met to serve this fish raw.”

Part of report from inspection of Zotos International on Feb. 27