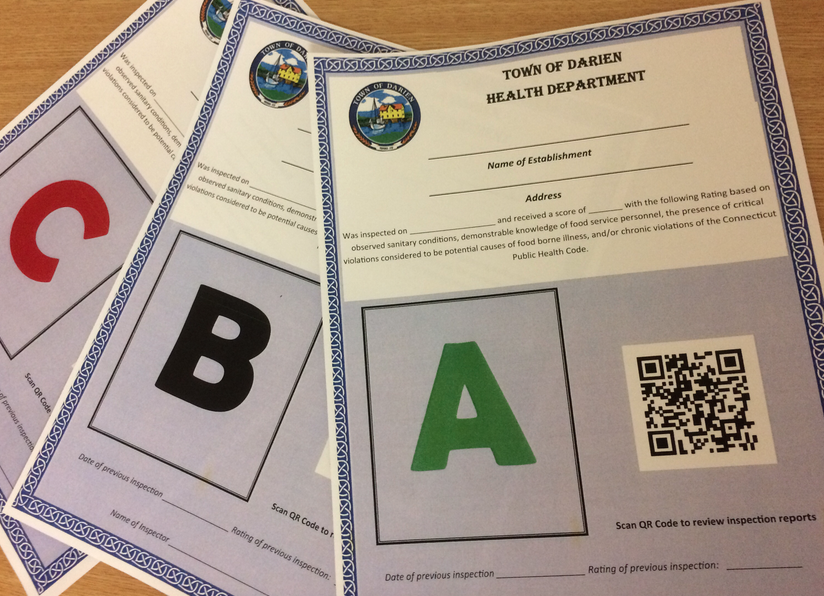 The "A", "B" and "C" letter grades a restaurant gets in its last inspection will be prominent on these certificates, which must be posted where customers can see them, and you can use your phone and the "QR" code to the right of the letter grade to get to the department's ratings website for more information.

Darien Health Department has made some changes to the way it informs the public about the latest restaurant inspections at each food service location in town: New inspection certificates show A-B-C letter grades that customers can see at a glance.

Also, customers with smartphones can use them to scan the “QR” code on the certificate to go to the department’s inspections website to get inspection details.

(Here’s an explanation — from the How to Geek website — of QR codes and how to use them — you’ll need to get an app for your phone, and they have a couple of recommendations.)

The certificates themselves “are to be posted in a prominent location plainly visible to patrons,” according to the Health Department, which demands the prominent posting in its regulations for all town food-serving establishments.

The new system started on Jan. 1. Anyone can also go to the department’s ratings website to get information on particular establishments (information from the latest inspections isn’t always posted immediately, but gets up on the site generally within about a week).

The “A”, “B” and “C” letter grades a restaurant gets in its last inspection will be prominent on these certificates, which must be posted where customers can see them, and you can use your smartphone to scan the “QR” code just to the right of the letter grade to get to the department’s ratings website for more information.

Until the start of 2017, the health department issued Good/Fair/Poor ratings to restaurants and other food-serving establishments it inspected, along with posting the establishment’s score on the state ratings system.

The department’s Good/Fair/Poor ratings system was a bit different from the state’s in that it considered past compliance and whether ongoing problems had been fixed, Health Director David Knauf said. The new A/B/C system also considers the “existence of chronic, or repeat violations” but will hew somewhat closer to the state ratings system.

An establishment can still get the lowest Darien rating, however, even if its state score looks very good on an individual inspection.

The state ratings system gives an establishment a 100 score if no violations of the Connecticut Public Health Code are found, then deducts 1 to 4 points per violation, depending on how important the code considers the violation.

Establishments with these town ratings can be expected to have these state scores, according to the department’s description of the new system:

A — “an inspection score of 93 to 100, with no 4-point demerit items and no more than two risk factor violations.”

B — “an inspection score of 85 to 92, with no 4-point demerit items and not more than four risk factor violations.”

If inspectors find an “imminent health hazard” at an establishment, it’s immediately closed. No letter grade is assigned if that happens, although it might be considered an “F” for flunking. Knauf said that in his years at Darien Health Department, no establishment has ever been told to close.