With a third sea turtle killed by a boat in six weeks in Long Island Sound, The Maritime Aquarium at Norwalk again is urging boaters to slow down and be aware of these endangered animals.

— an announcement from the  Maritime Aquarium 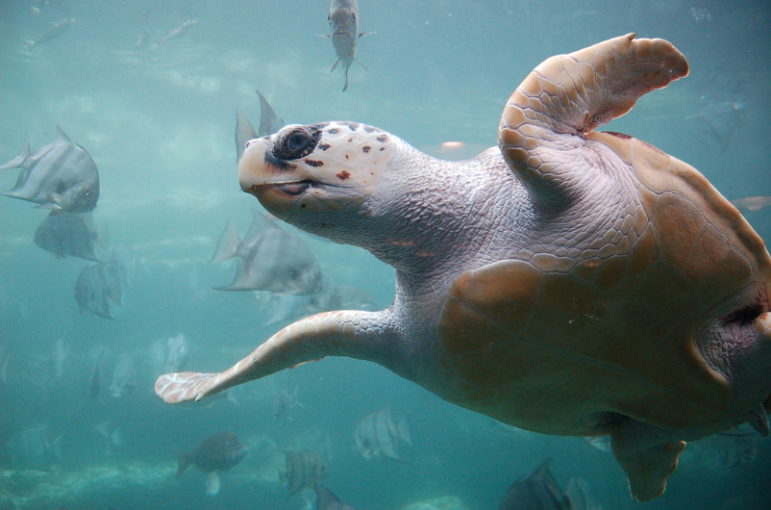 A dead loggerhead sea turtle was found on Wednesday, Aug. 29 on Long Beach in Stratford with apparent propeller slashes in its shell. This death follows similar fatal boat strikes of loggerheads discovered off Norwalk’s Sheffield Island on Aug. 9 and in Stratford on July 15.

“Three turtle deaths in the Sound is highly unusual – and completely unacceptable,” said Dr. David Hudson, research scientist for The Maritime Aquarium. “Boaters need to know that, as Long Island Sound’s water quality improves, animals like sea turtles and dolphins and even humpback whales are returning. And so boaters can no longer race around the Sound at full throttle but only at half attention.”

Four species of sea turtles may visit the Sound in the summer: loggerhead and green, which are both listed as Threatened; and Kemp’s ridley (the smallest sea turtle) and leatherback (the largest), both Endangered.

Sea turtles are most vulnerable to boat collisions when they come to the surface to breathe and/or warm themselves in the sun. (They are cold-blooded.) At the surface, Hudson said, the turtles are least able to make avoidance maneuvers.