Fitch Academy, the town’s alternative high school program, might not have its new location ready for the first day of school, district officials said just weeks ago, but it and every school in the district are now expected to start on time, ready for students, Interim Superintendent Elliott Landon said Tuesday night.

“All our schools are ready to go,” Landon told the Board of Education. 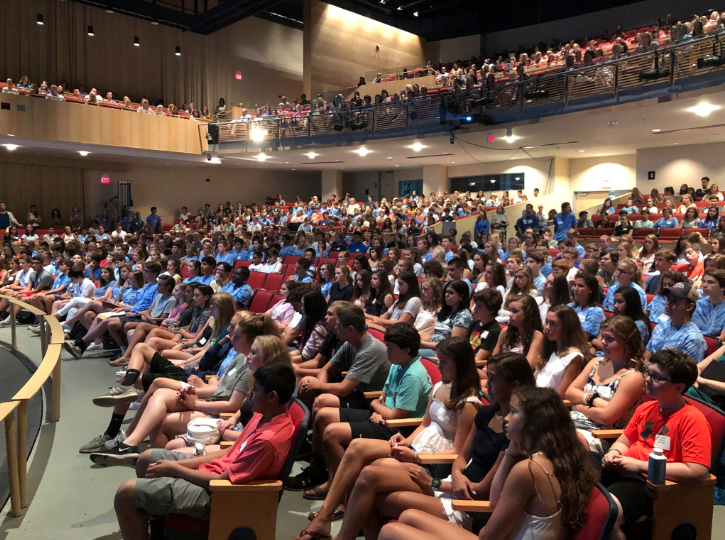 Freshmen orientation on Wednesday morning, Aug. 29, at Darien High School. Thursday is the first day of school. We see one — and only one — pair of long pants in this picture, taken on one of the hottest days of the year. The blue tee shirts were worn by “link leaders” — student volunteers helping freshmen get oriented.

It’s hard to prepare the schools in Darien “because we make such tremendous use of our buildings” over the summer, he said. He thanked the school district’s maintenance staff and district officials for their efforts.

Over the course of the summer, just over 50 teachers have been hired by the school district, Landon said.

“Fitch Academy is up and will be running right on time,” he added. District officials had earlier reported that the alternative high school, with just under two dozen students expected to be attending it by the start of the school year. The district has signed a five-year lease for 3,253-square feet of space with the Nielsen Company that owns the Thorndal Circle office park.

State regulations mandate various building requirements for places where students are taught, so the office building at 6 Thorndal Cir., which abuts the Darien Library parking lot, various changes needed to be made before students started going there. 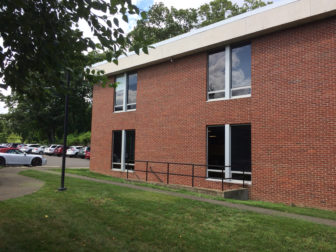 This corner of the second floor of this building at 6 Thorndal Circle is the where Fitch Academy alternative high school program is expected to start. This picture shows only a part of the second-story corner space. This is the end of the building closest to Police Headquarters.

A sprinkler system might not be in place by the first day of schools, so students might return temporarily to Darien Library, which had agreed to house the program for its first year, officials had said.

But the work got done on time.

“I can’t thank Mr. [Gerald] Nielsen enough for making it possible,” Landon said. Jerry Nielsen, a former member of the town Board of Selectmen, “worked very, very hard with us to make it possible,” and the on-time opening couldn’t have been done without him, Landon said. “We’re very, very thankful for his efforts.”

Landon also had some bad news to report: The U.S. Consulate in Beijing has rejected visa applications for Chinese students participating in the Darien High School China Exchange program. Landon just received word of the decision on Wednesday.

Current tensions in U.S.-China relations (related to trade) was perhaps responsible for the rejection, Landon said. School district officials are trying to work with the offices of Connecticut’s two U.S. senators to get the State Department to reverse the decision.

“It’s been a great program,” he said. “We’re doing our best” to get the decision reversed.

One thought on “Superintendent: All Darien Schools Ready for First Day, Even Fitch Academy”