Darien police are looking into setting up an alternative to filing charges against teens caught drinking — an educational program.

“We are seeing an uptick in two areas — the under-age drinking parties and dealing with the emotionally disturbed,” Lovello told the commission. “We are in discussion about alternative ways of dealing with youth that we encounter in an under-age drinking setting. I think there are new programs other departments and other states are doing, diversionary-type programs that don’t involve the judicial system directly, so we’re exploring what other options are available to us.”

Lovello said he had already discussed the matter with Richard Colangelo Jr., the state’s attorney for the Stamford-Norwalk Judicial District.

“We already have the blessing of the state’s attorney to explore these options, because we would need some assurance from him that we weren’t violating any sort of protocol or state law by choosing not to take certain police action when it was warranted,” he said.

Lovello said Dan Brenner, the superintendent of Darien Public Schools has been “engaged […] in that discussion,” Lovello said. In addition to being superintendent of schools, Brenner has had a private psychology practice in Great Neck, N.Y., for the past three decades.

New Canaan police announced in January that they were adopting a diversionary program for youths caught drinking, NewCanaanite.com reported:

[New Canaan]Police Chief Leon Krolikowski said his department is “on the cusp” of launching its widely anticipated program that will see some young New Canaanites found with alcohol at underage drinking parties offered a chance to attend educational workshops with their parents in lieu of facing criminal infraction summonses.

The program would give parents and teens information on how alcohol consumption can lead to abuse of narcotics, including cocaine and heroin, Krolikowski said. New Canaan police were working with an addiction psychologist on developing a curriculum for the program.

Teenage alcohol consumption at parties is a very long-standing problem, as are the practices of parents allowing it and teenagers crashing drinking parties.

According to this article in the July 5, 1963 Life magazine (which includes information gathered in lower Fairfield County), party crashing with alcohol had been happening for years, and the New Canaan police chief at the time was warning parents not to let teenagers drink: 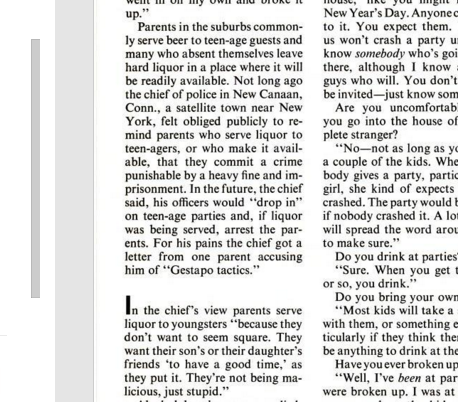 From Life magazine, July 5, 1963 (article starts on page 62; right after an article about the Lockwood-Mathews Mansion in Norwalk)

5 thoughts on “Teens Caught Drinking May Get Education Program Rather Than Charges, Police Chief Says”